Potato (Solanum tuberosum) is the only known major and significant host of Clavibacter sepedonicus. The bacterium has been isolated from symptomatic and asymptomatic sugar beet (Beta vulgaris). However, these findings are rare and appear to depend on the sugar beet variety (Bugbee et al., 1987; Ignatov et al., 2018; Van der Wolf et al., 2005a). C. sepedonicus has also been isolated once from naturally infected tomato plants (Van Vaerenbergh et al., 2016). Upon artificial inoculation, many members of the Solanaceae family (e.g. Solanum melongena), but also other plant species (e.g. Urtica dioica), were found to be susceptible to C. sepedonicus (Knorr, 1948; Van der Wolf et al., 2005a).

C. sepedonicus was first described in Northern Europe and used to be found mainly in regions with a temperate climate in the northern hemisphere. Within the EPPO region, the climate in North, North-West and Central Europe is favorable to the disease. In the Southern part of the EPPO region, climatic conditions are not suitable for the establishment of ring rot except, in mountainous areas (Li et al., 2018). In the EPPO region, C. sepedonicus is often reported with restricted distribution, and is only considered widespread in Russia, Ukraine and on the island of Crete (Greece). 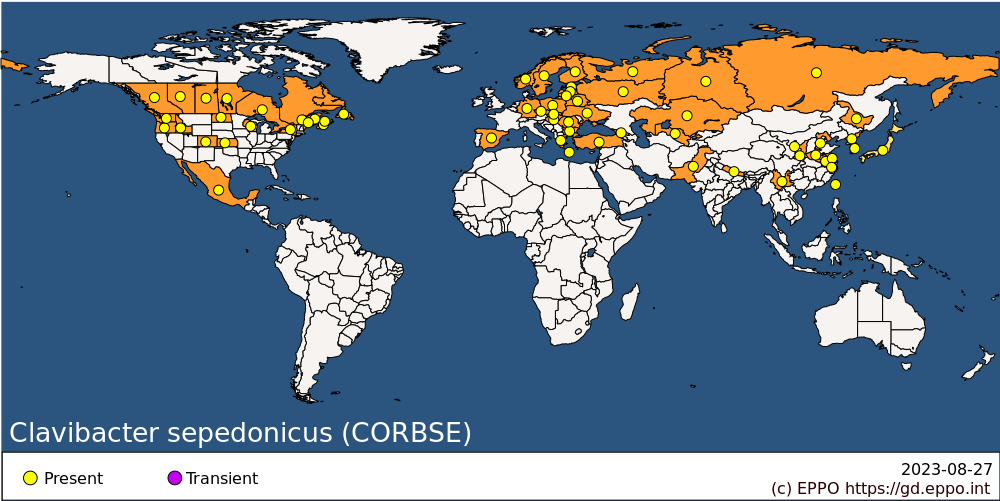 The most common pathway of introduction of C. sepedonicus is through infected seed potatoes. True potato seeds might also be a source of infection if they come in contact with contaminated tools (Van der Gaag et al., 2015). After a diseased seed potato is planted, the bacteria multiply very rapidly and pass along the vascular strands into the stems and petioles. From there they reach the roots and maturing daughter tubers, sometimes within 8 weeks after planting. The daughter tubers may themselves be used as seed potatoes and perpetuate the disease. C. sepedonicus does generally not survive in the soil during winter. The bacterium can, however, survive and remain infectious on potato bags, barn walls, machinery and other equipment and in volunteer plants from an infected crop. Survival is longest in cold dry conditions. C. sepedonicus is relatively vulnerable to higher temperatures (>55°C) suggesting that compost may not be a major inoculum source. However, survival of the bacterium inside protective plant tissue during the composting process might occur and the use of residues from potato processing in agriculture is therefore not recommended (Steinmöller et al., 2013; Stevens et al., 2021). The bacterium remains infectious at and above freezing temperatures for at least 18 months on burlap and for 63 months in infected potato stems (Nelson, 1985). If volunteer plants from a previously infected crop are lifted with an otherwise healthy seed potato crop, that crop can be infected. C. sepedonicus has a relatively low optimal growth temperature (21-23°C) and therefore it is mainly confined to cooler areas of the world (see Geographical distribution).

The symptoms shown by infected plants are rather variable and, because they usually appear late in the growing season, may be mistaken for late blight (Phytophthora infestans), Verticillium wilt (Verticillium albo-atrum, Verticillium dahliae), stem canker (Rhizoctonia solani) or those caused by drought. The first symptoms of wilting develop in lower leaves, either all around the plant or only on one side of one stem. The margins of the leaves roll inwards and upwards and the surface loses its light shiny appearance. Leaves become progressively dull light-green, then grey-green with occasional mottling, then yellow and finally brown and necrotic. When infected stems are cut across, discoloration of vascular tissue is not obvious. Symptom formation is enhanced by hot, dry weather conditions (De Boer & Slack, 1984; Whitworth et al., 2019).

Tuber symptoms may be confused with those caused by the bacterium Ralstonia solanacearum (EFSA, 2019). Tuber infection occurs through the stolon. Early infections can be observed, when the tuber is cut across the heel end, as narrow glassy to cream-yellow zones along the vascular tissue near the stolon end. In the case of more advanced infections this narrow yellowish to light-brown zone surrounds all the vascular tissue. In later stages the vascular ring and the discoloured zone become soft. Characteristically, upon squeezing, the tissue outside the vascular ring is easily separated from the inner tissues and creamy, cheese-like ribbons of odourless bacterial ooze with macerated tissue are expelled. In these advanced stages, external symptoms may also be observed, consisting of reddish to brown blotches around the eyes. The skin shows irregular, often star-shaped cracks. These cracked tubers are very susceptible to secondary soft-rot micro-organisms which obscure the ring rot symptoms (De Boer & Slack, 1984; Van der Wolf et al., 2005b; Whitworth et al., 2019). Mild infections in both susceptible and tolerant potato cultivars may cause so-called latent infections of daughter tubers. Latent infections can only be traced by laboratory testing (see Detection and inspection methods).

Surveillance for the presence of C. sepedonicus in a country or area not known to have potato ring rot, is usually based on a systematic detection survey. Specific guidance on the sampling of potato tubers in store or in the field (shortly before harvest) is given in the EPPO Standards PM 9/2 National regulatory control systems for C. sepedonicus (EPPO, 2011), PM 3/70 Export certification and import compliance checking for potato tubers (EPPO, 2019a) and PM 3/71 General crop inspection procedure for potatoes (EPPO, 2007). Additionally, samples may be inspected visually by cutting tubers at the stolon end, and growing potato crops may be visually inspected at appropriate times for typical signs and symptoms of the disease. It should be considered that under European climatic conditions, above ground symptoms are rarely found and then often only at the end of the season (EPPO, 2011).

Because symptoms of ring rot are variable and sometimes masked by other diseases, and because C. sepedonicus often is present without causing symptoms, ring rot can be confirmed only by laboratory testing. C. sepedonicus is a slow-growing bacterium and therefore when isolating the bacterium an enrichment step is often necessary to prevent it being overgrown by other bacteria. This can be done by inoculating specific eggplant varieties with potato extracts so the bacterium can multiply inside this plant. Subsequent isolation and purification steps are strongly facilitated by this step (EFSA, 2019; EPPO, 2022; Van der Wolf et al., 2005b).

An immunofluorescence test and several molecular tests have been widely implemented in diagnostic laboratories to detect C. sepedonicus. Due to specificity problems observed in some cases, it is important to use a second test for detection, based on a different biological principle or on a different part of the genome, to confirm a positive result in the first detection test (EFSA, 2019; EPPO, 2022; Van der Wolf et al., 2005b). The conventional PCR based test by Pastrik et al. (2000) and several real-time PCR tests have been shown to perform well in recent test performance studies (Vaerenbergh et al., 2017; Vreeburg et al., 2018). Among the real time PCR tests the one of Schaad et al. (1999) as well as the more recently developed real time PCR tests (Gudmestad et al., 2009; Massart et al., 2014; Vreeburg et al., 2016; Vreeburg et al., 2018), exhibit high analytical sensitivity and analytical specificity and have been implemented in diagnostic laboratories.

An updated version of the EPPO diagnostic protocol for the bacterium, providing details on the detection and identification tests is availabel (EPPO, 2022).

Important means of spread are the planting of infected seed potatoes and contamination of containers, equipment and premises. When seed potatoes are cut before planting the cutting knife is an important dispersal unit: after cutting an infected tuber, 20-30 healthy tubers may be infected. Planters and graders which have been contaminated by bacteria from a few highly infected potatoes are also a potent infection source. Spread in the field from plant to plant is usually very low, but there is experimental evidence that some insects, including the Colorado beetle (Leptinotarsa decemlineata), leafhoppers and aphids can transmit the disease (Christie et al., 1991; Duncan & Généreux, 1960; Mansfeld-Giese, 1997).

Damage is caused by destruction of vascular tissues and subsequent wilting and dying of plants and secondary rotting of tubers. In the past crop losses have been mainly reported from North America (up to 50%; Easton, 1979) and Russia (15-30% of plants infected, up to 47% crop loss; Muller & Ficke, 1974). Where ring rot occurs in the EPPO region, the disease appears more sporadically and at low levels of infection. However, a single infected tuber can already have a large economic impact. The economic impact can be caused by direct crop losses, by rejection of infected lots and by loss of (potential) export markets (Van der Wolf et al., 2005b).

At the moment there is no method of direct chemical or biological control available. Breeding for resistance produced in the past some tolerant cultivars, which are not used much (Manzer et al., 1987; Manzer & McKenzie, 1988). The most important methods of control are production of disease-free seed potatoes following strict certification and testing schemes (Nelson, 1985; EPPO, 1999) and sanitation (Lynch et al., 1989).

In addition, crop rotation and weed/volunteer control are important preventive measures (EFSA, 2019; EPPO, 2020).  Since the bacterium might be present in mixed soil from potato handling facilities, soil should only be returned to agricultural fields if the risk is considered acceptable. Conditions for returning soil to a place of production used to grow potatoes are described in draft Standard PM 3/92 (1) Management of phytosanitary risks for potato crops resulting from movement of soil associated with root crops and potatoes (EPPO, in press). Since the bacterium might survive inside protective plant tissue during the composting process, the use of residues from potato processing in agriculture is not recommended (Steinmöller et al., 2013; Stevens et al., 2021).

Disinfection is not part of routine hygiene measures but is obligatory after C. sepedonicus has been detected. EPPO developed a Standard that describes the cleaning and disinfection procedures in the potato production chain (EPPO, 2006). The efficacy of several chemical disinfection methods on different surfaces has been investigated (Howard et al., 2015). More specifically, disinfection of wooden potato crates with a product containing sodium-p-toluenesulfochloramide has been shown to be effective (Stevens et al., 2017).

A number of seed-potato-producing countries in the EPPO region are free from the pest, as well as most Mediterranean countries exporting ware potatoes towards Northern European countries. The pathogen is likely to be able to establish wherever climatic conditions are favorable for the pathogen and potatoes are grown and to become increasingly widespread. While the direct economic impact of ring rot may only be moderate, especially with modern production systems, it would constitute a major extra constraint on seed potato production in countries where it does not occur, with considerable indirect effects on trade.

Ring rot can occur at low levels in potato production systems and can cause latent infection of tubers. Therefore, phytosanitary measures focusing on potato consignments only are inadequate. Measures have to be implemented for the whole production system, i.e. on the material from which potato consignments are derived and at the place/site or area of production. For seed potatoes, in particular, they involve a series of multiple checks, each of which is considered by itself insufficient.

This datasheet was first published in the EPPO Bulletin in 1978, revised in the two editions of 'Quarantine Pests for Europe' in 1992 and 1997, as well as in 2021. It is now maintained in an electronic format in the EPPO Global Database. The sections on 'Identity', ‘Hosts’, and 'Geographical distribution' are automatically updated from the database. For other sections, the date of last revision is indicated on the right.