TICV was first identified in California in tomato fields, and in the USA it has been found primarily in commercial greenhouse-grown tomato in California and North Carolina (Parella, 2008).

In Asia TICV has been detected in protected and in field-grown tomato crops in Indonesia and Japan (Parella, 2008). 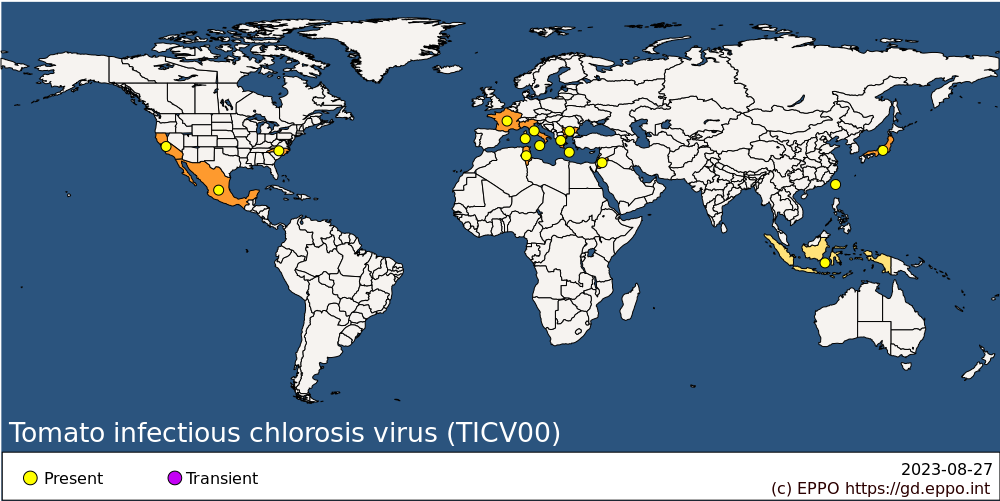 TICV is a crinivirus that is transmitted locally by whiteflies in a semi-persistent manner. Research by Duffus et al. (1996) has shown that Trialeurodes vaporariorum (Hemiptera: Aleyrodidae) is a vector of TICV in indoor and outdoor conditions. Minimum acquisition access period by T. vaporariorum for TICV was after feeding for 1 h, but TICV was transmitted with greater efficiency after longer feeding periods. TICV was not found to be transmitted by Bemisia tabaci, Trialeurodes abutiloneus or Myzus persicae. As a rule, the virus was detectable in the insects during the first 24-h feeding period, but there were cases where insects were able to retain TICV for 4 days.

Tomato plants affected by the yellowing disease show interveinal chlorosis symptoms that begin on lower leaves and gradually progress to the upper ones. As symptoms develop, interveinal areas of leaves eventually become bright yellow except for the veins, which remain green. Interveinal chlorosis usually appears 6 – 8 weeks after inoculation by whiteflies. Other symptoms include leaf rolling and necrotic flecks on the older leaves, as well as chlorotic spots on the new leaves (Hartono et al., 2003). Tomato plants appear less vigorous, and in some cases, fruits show delayed ripening (Anfoka et al., 2007). Generally, symptoms induced in tomato by TICV and by another tomato-infecting crinivirus, tomato chlorosis virus (ToCV), are very similar and often misidentified as nutritional deficiency (Vaira et al., 2002).

Symptoms in lettuce consist of interveinal yellowing, mainly of the oldest leaves, resembling those caused by nutrient deficiency. Symptomatic older leaves sometimes show necrosis of the margins and are moderately thicker and more brittle than younger leaves (Parella, 2008).

Tomato criniviruses, such as TICV, have also been found to infect a large number of weed species that frequently appear in tomato crops. The majority of TICV infections in weeds are symptomless or associated with mild abnormalities such as interveinal chlorosis of leaves (Maliogka et al., 2020). However, Chenopodium album and Chenopodium murale showing chlorotic spots and blotches have been observed in many tomato fields (Anfoka et al., 2007).

TICV has a bipartite, positive sense single-stranded RNA genome which is capped at its 5′ end, and the length of its genomic RNA 1 and RNA 2 strands are 7.8 and 7.4 kb, respectively.

Disease diagnosis in crinivirus-infected plants is difficult as similar symptoms may be induced by different virus species (e.g. TICV and ToCV in tomato) or by abiotic factors (e.g. nutritional disorders). Therefore, it is necessary to apply laboratory techniques for the accurate and reliable determination that symptoms are caused by a crinivirus, and for determining which species is associated with the disease (Maliogka et al., 2020).

The highest concentrations of TICV in infected plants were found to be in the young tomato leaves just before the onset of yellowing (Li et al., 1998).

TICV, as is the case for other criniviruses, is phloem restricted and accumulates at low concentrations within infected host plants. Therefore, crinivirus virions are difficult to purify in large quantities for production of antibodies and ELISA methods are usually not reliable for their detection (Maliogka et al., 2020). Polyclonal antibodies have been produced against TICV (Duffus et al., 1996, Jacquemond et al., 2009) but only for research purposes. No cross-reactions were observed, however, false-negative ELISA results were found regularly in samples which were close to the detection limit (Jacquemond et al., 2009).

Conventional RT-PCR and real-time RT-PCR can be used for both detection and identification. In addition, sequence analysis of amplicons can be used for identification (EPPO, 2013) The specific primers have been derived from the heat shock protein (HSP70) homologue gene and CP region located on RNA2 of TICV (Vaira et al., 2002, Hartono et al., 2003). These primers showed the highest relative analytical sensitivity, the best analytical specificity, and good repeatability in detecting TICV in replicated tests (EPPO, 2013).

Real time RT-PCR tests have become widely used recently for quick, reliable and sensitive virus detection, as well as for quantification of plant viruses in their hosts and arthropod vectors (Maliogka et al., 2020). During the preparation of the EPPO diagnostic protocol, various primers and probes to TICV were evaluated and the best ones were selected. The primers and probe, were validated in a test performance study involving five laboratories.

Dot blot analysis (with digoxigenin-labelled complementary RNA synthesized by an in vitro transcription reaction or with dsDNA probes) is not commonly used, and for routine diagnosis it can be replaced by RT-PCR tests (EPPO; 2013).

TICV can also be detected by vector transmission to indicator plants but is not transmitted mechanically. It can be distinguished from ToCV by symptoms on the indicator plants N. benthamiana and N. clevelandii. Whereas both species show interveinal yellowing when infected with either virus, only TICV causes necrotic flecking in these hosts (Wisler et al., 1998b).

In international trade, TICV may be carried by infected plants for planting, mainly infected tomato plants (EPPO, 2007). Over short distances, TICV can be carried by its vector T. vaporariorum. The high number of natural plant hosts and ready transmission by T. vaporariorum which has a wide distribution outdoors and on protected crops have contributed to the spread of TICV. As is the case for almost all viruses in the Closteroviridae family, TICV is unlikely to be seed-borne. No transmission was detected by mechanical transmission tests (Duffus et al., 1996).

Whitefly vectors would not be expected to spread the virus quickly to a new area under natural conditions. However, viruliferous whiteflies could be moved on plants and plant produce moving in international trade (CSL, 2005).

Criniviruses emerged as a major problem for world agriculture at the end of the twentieth century with the establishment of some of their whitefly vectors in temperate climate zones (Fiallo-Olivé et al., 2019).

The whitefly T. vaporariorum, distributed throughout the world, and TICV, represent a severe threat to tomato crops in Europe and worldwide (Vaira et al., 2002).

High losses in tomato crops caused by TICV have been reported (Duffus et al., 1996; Vaira et al., 2002; CSL, 2005, Anfoka et al., 2007; Parella, 2008). In the Irvine area of Orange County, California (US) in 1993, symptoms of the virus were found on almost 100% of the plants in all tomato fields. The disease induced severe crop loss and was associated with the occurrence of high populations of T. vaporariorum (Duffus et al., 1996). In that season, economic losses for tomato growers were estimated as approximately 2 million USD (Wisler et al., 1998). In 1995 and 1997, TICV was found in Italy in tomato fields, but the level of damage was not very high. In Greece, 80–100% infection incidence was reported in some glasshouse tomato crops (Dovas et al., 2002).

TICV and ToCV have been found together in tomato, indicating that infection by one crinivirus species does not prevent infection by a second (Wintermantel et al., 2008).

As with other virus diseases, once a plant is infected there is no cure, and measures should be taken to eradicate sources of inoculum and eliminate the presence of vectors to minimise the risk of further transmission therefore, control of whitefly vectors and weeds as reservoirs of infection are key control measures.

Whitefly management is generally based on the application of foliar insecticides when pest levels are low. Once population levels are high, management is very difficult (Alibakhshi et al., 2020). Control of the whitefly T. vaporariorum is difficult and has had varying success rates over the years. The use of synthetic insecticides is the primary mode of control; however, indiscriminate and injudicious use of pesticides may lead to the development of insecticide resistance both in greenhouses and fields. T. vaporariorum has developed resistance to pyrethroids, carbamates and organophosphates such as dimethoate. However, chemical control is still a key component of integrated pest management systems (Alibakhshi et al., 2020).

Using containment structures, for example adding nets to the greenhouse ventilation windows limiting the access of the whitefly vectors to the plants, results in an efficient protection of the crop from infection (Fiallo-Olivé et al., 2019).

There are no commercial tomato hybrids showing resistance to TICV (Maliogka et al., 2020).

In countries where TICV has been recorded, the virus has caused serious economic losses to tomato growers. Tomato is one of the most important vegetable crops worldwide, and in the EPPO region where it is grown in and out of doors in the south, and in glasshouses in the north. The vector of TICV, T. vaporariorum, is a very widespread pest of glasshouse crops in the EPPO region and also occurs on field crops during summer months. To date, TICV has been identified in some countries of the EPPO region, the Americas and Asia. Further spread of TICV through T. vaporariorum or contaminated planting material could cause significant damage to the production of tomatoes and other major host plants.

It is also worth noting that no significant loss of yield or quality of host plants caused by TICV has been reported recently.

TICV was added in 2007 to the EPPO A2 List, and endangered EPPO member countries are thus recommended to regulate it as a quarantine pest. Phytosanitary measures should require that young tomato plants for planting are produced in a place of production free from the pest, under conditions which exclude the vector (EPPO, 2007). Eradication of isolated outbreaks in glasshouse-grown tomatoes could be achieved by destruction of affected hosts and of the vector T. vaporariorum.

This datasheet was extensively revised in 2022 by Elena Karimova and Yuri Shneyder from All-Russian Plant Quarantine Center. Their valuable contribution is gratefully acknowledged.

This datasheet was first published in the EPPO Bulletin in 2009 and revised in 2022. It is now maintained in an electronic format in the EPPO Global Database. The sections on 'Identity', ‘Hosts’, and 'Geographical distribution' are automatically updated from the database. For other sections, the date of last revision is indicated on the right.