Potato plants are the primary host, with larval development in the tubers and adult feeding on the leaves. Adults have occasionally been seen associated with a number of other plant species, but evidence strongly indicates that the species is oligophagous and can only reproduce and develop successfully on tuber-forming species of Solanum (Muñoz Cáceres, 1998; Alcázar & Cisneros, 1999; Durán Auccatinco, 2001)

Premnotrypes vorax, like other species of the genus attacking potatoes, occurs only in South America, at high altitudes of the Northern Andes (between 2 100 and 4 700 m a.s.l.). The EPPO designation of ‘Andean’ for the group is thus completely equivalent in practice to the EU designation ‘non-European’.

Premnotrypes vorax is distributed in Peru, being the dominant Premnotrypes species in Northern Peru, and in Ecuador, Colombia and Venezuela, where it is the only species of the genus (Angeles, 1966, 1971; Alcazar & Cisneros, 1999; Kuehne, 2007; Yábar Landa, 2014). 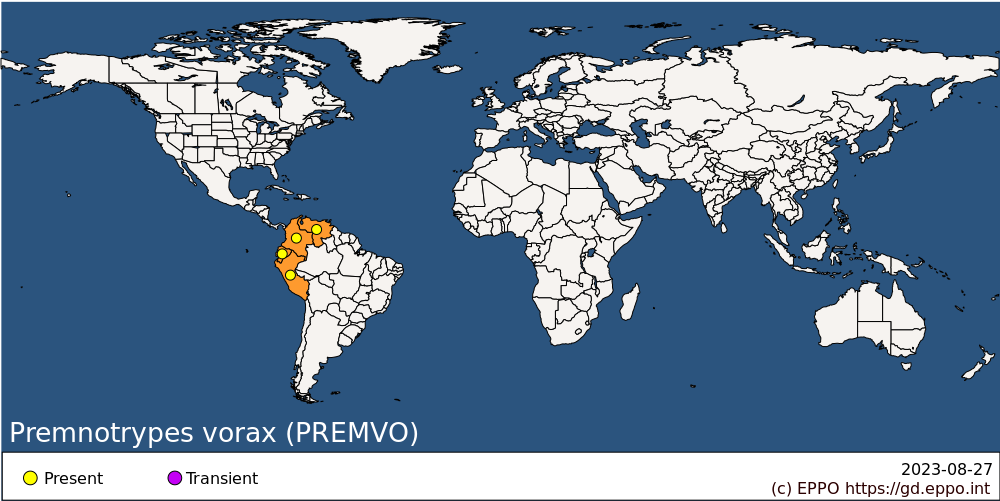 The life-cycle of P. vorax appears to be basically similar to other Premnotrypes species, though there are differences in detail (Calvache Guerrero, 1986; Muñoz Cáceres, 1998; Alcázar & Cisneros, 1999). The dry winter season is passed in the soil as a prepupa, pupa and then over-wintering adult within the pupal cell. When the spring rains start, the adults of the new generation emerge from the soil and feed on the leaves of the potato plants if available, or migrate to other potato fields. Adults remain hidden during the day, sheltered beneath debris or in soil cracks near the base of the potato plants. In the evening they climb to the foliage to feed. Several days after mating, females lay eggs in straw or other plant debris near the potato plant. The newly hatched larvae move into the soil to the developing tubers and bore into them. The larva continues feeding inside the tuber until ready to pupate. P. vorax passes through five larval instars. When fully grown, the last instar larva leaves the tuber and prepares an earthen cell for pupation in the surrounding soil. There is usually one generation per year in the areas with one potato-growing season, for example in Northern Peru and in Bolivia, but P. vorax can have two or three generations per year in irrigated and more humid areas with continuous potato cropping, in the eastern Andean slopes of Peru and in Ecuador, Colombia and Venezuela (Alcázar & Cisneros, 1999; Kuehne, 2007).

Feeding by adults produces semi-circular notches along the edges of leaves. The larvae tunnel within the tubers, causing little externally visible damage. Pupae occur in the soil inside earthen cells.

Note. These symptoms are similar among all Premnotrypes species. Differences with other Andean potato weevils worth mentioning are that adults of Phyrdenus sp. produce circular holes in the leaves and the pupae of Rhigopsidius sp. occur inside the tuber (Alcázar & Cisneros, 1999). In Colombia, in addition to Premnotrypes vorax, there is a Naupactini species that is an important potato pest: Leschenius vulcanorum (Kirsch), known as ‘potato shooter’ or ‘tiroteador de la papa’ (in Spanish), but its larvae live feely in the soil, and unlike those of Premnotrypes, they bite and bore the potato tubers and roots externally (del Río et al., 2012).

Adults of P. vorax are stout, apterous, weevils about 5-8 mm long. Their colour varies from greyish-brown to dark brown and they have tubercles on pronotum and elytra, which make them difficult to distinguish from the background soil. The eyes are well developed and the rostrum short and broad (the length only about twice the width). A postocular lobe on the anterior margin of prothorax covers part of the eye. They show sexual dimorphism: females larger than males; last ventrite with apical margin acute in females and blunt in males. P. vorax can be distinguished from other species of Premnotrypes by the following combination of characters: epistome (at apical dorsal part of rostrum) elevated; without superciliary arches or swellings above each eye; rostrum with strong dorsal curvature; pronotum with pointed lateral swelling; elytra flat up to the fifth interstria and then almost vertical to the side (Kuschel, 1956; Alcázar & Cisneros, 1999; Yábar Landa, 2014).

The legless larva and exarate pupa are typical of the Curculionidae. The larva is comma-shaped, creamy-white except the ochreous head, with antennal sensorium cushion-like as it is characteristic of Entiminae (Marvaldi, 2003). Larval characters diagnostic of the genus are given by Emden (1952: paragraphs 6, 54, 55, and 59 of the Key).

Premnotrypes spp. can be detected by visual inspection. Adults can be seen on the green parts of the plants. Being flightless they only move by walking, and in the field, they can be caught with traps of the pitfall type. They remain hidden at the base of plants during daylight hours and can be detected at night by inspection of the plant foliage; they play dead when disturbed, so they can be collected by shaking the plants over a basin (Yabar Landa, 1988, 1994). Eggs are difficult to detect, protected in straw or plant debris at the base of the plants.

Larvae of Premnotrypes spp. can be detected by revising the potato tubers. Because larvae bore inside the tubers, their presence by external inspection requires careful observation. In light-skinned tubers, the damage is indicated by the presence of irregular blackish spots, and in dark-skinned tubers, there may be small pustules indicating the place where the larvae have entered (Yábar Landa, 1988).

Pupae and over-wintering adults occur in the soil. Mature larvae leave the tubers to pupate in the soil, so detection of pupae in the field is done by examining the soil surrounding the plants during and after harvest. Mature larvae, pupae and adults can also be detected below tubers piled in storage and heaping sites (Alcázar & Cisneros, 1999).

Infested tubers have been an important means of spread from field to field, and represent the main potential pathway for transport of P. vorax in international trade. Premnotrypes vorax is thought to have been introduced into Venezuela with illegally imported potatoes. Most of the larvae reach maturity and leave the tuber before harvest, but a small proportion of them do not abandon it, so adults can also emerge without rain, in storage conditions, contributing to new infestations or to the spread (e.g., via seed potatoes) of the species (Alcázar & Cisneros, 1999; Kuehne, 2007; Yabar Landa et al., 2011).

The genus Premnotrypes includes the most important weevil species on potatoes in the Andes, which, together with Rhigopsidius tucumanus Heller and Phyrdenus muriceusGermar, are collectivelly known as the Andean Potato Weevil (APW) complex (Alcázar & Cisneros, 1999; EFSA PLH Panel, 2020). In many areas, Premnotrypes spp. are the most important pests of potatoes, sometimes causing complete destruction of unsprayed crops. The adults feed on foliage and can cause serious damage on young potato plants. Major damage is caused by the larvae feeding on the tubers, with the consequent loss of their commercial value, and crops with up to 80% of potato tubers damaged by P. vorax have been reported from Venezuela. In Ecuador, yield reductions have been estimated for up to 50 %, with management costs representing about 20 % of the total production costs (Gallegos et al., 1997).

Control of P. vorax has been mainly carried out by means of chemical insecticides. In addition to direct monitoring of the crop and chemical control, many other strategies are considered to implement integrated pest management (IPM) against P. latithorax and other APW, including: biological control, with entomopathogenic fungi or nematodes, with natural enemies such as predator beetles; use of resistant plants; agricultural control strategies, such as crop rotation, early harvest, shelter traps/bait crop, border application of insecticides and creation of ditches around field. The various control methods and studies testing their efficacy are reviewed by Kuehne (2007).

The potential of P. vorax and other potato weevils to cause damage in Europe is uncertain, owing to the unusual character of the high montane climate of the tropical Andes, with its extreme diurnal fluctuations in temperature and high solar radiation, with dry, cold winter and rainy, moderately warm spring-summer (Alcázar & Cisneros, 1999). It is likely that pests from such an environment will be preadapted to temperate climates of Europe. Colorado beetle (Leptinotarsa decemlineata) (EPPO/CABI, 1996) is an example of a montane species which has shown great adaptability. The Andean potato weevils are likely to establish, spread and cause economic impact in some of the potato-growing areas in Europe, if introduced (EFSA PLH Panel, 2020).

Premnotrypes vorax belongs to the group of South American pests of potato which justifies post-entry quarantine procedures in the EPPO region, together with equivalent checks before export. Only material for scientific purposes should normally be imported from South America (EPPO, 2021).

Emden FI van (1952) On the taxonomy of Rhynchophora larvae: Adelognatha and Alophinae (Insecta: Coleoptera). Proceedings of the Zoological Society of London, Volume 122, pp. 651-795.

Kuschel G (1956) [Revision of the Premnotrypini and additions to the Bagoini]. Boletin, Museo Nacional de Historia Natural, Chile 26, 187-235 (in Spanish).

This datasheet was first published in the EPPO Bulletin in 1984 and revised in the two editions of 'Quarantine Pests for Europe' in 1992 and 1997, as well as in 2021. It is now maintained in an electronic format in the EPPO Global Database. The sections on 'Identity', ‘Hosts’, and 'Geographical distribution' are automatically updated from the database. For other sections, the date of last revision is indicated on the right.