The telial hosts of M. medusae f. sp. deltoidis are Populus spp. belonging to the section Aigeiros and Tacamahaca, especially P. balsamifera, P. deltoides, P. nigra, and their hybrids and cultivars, whereas the only telial host of M. medusae f. sp. tremuloidis with reported infection in nature is P. tremuloides, belonging to the section Populus. The aecial hosts are conifers in the family Pinaceae. In North America, Larix laricina, L. occidentalis, Pseudotsuga menziesii, Pinus contorta and P. ponderosa are the principal hosts for the aecial state of the fungus found infected in nature (Ziller, 1965; 1974). In addition, many other conifers, such as Larix spp., Pinus spp. Abies spp., Tsuga mertensiana, Picea sitchensis, have been artificially infected at the seedling stage. For more information, see Walker & Hartigan (1972) and Pinon (1986).

M. medusae is indigenous to North America. Based on the poplar clones infected outside North America, it appears that only M. medusae f. sp. deltoidis has spread from there to other continents (Hiratsuka, 1939; Dupias, 1965; Wilkinson & Spiers, 1976; Zheng et al., 2019). There is no evidence that M. medusae f. sp. tremuloidis has ever been found on any other continent. Although M. medusae f. sp. deltoidis was first reported from Spain about one century ago (Fragoso, 1925), it has failed to become invasive in Europe and its distribution is restricted to Southwestern Europe (Pinon, 1986; Desprez-Loustau et al., 2007). The report from Uruguay (Walker, 1975) is based on a single doubtful record, which may refer to other Melampsora spp. 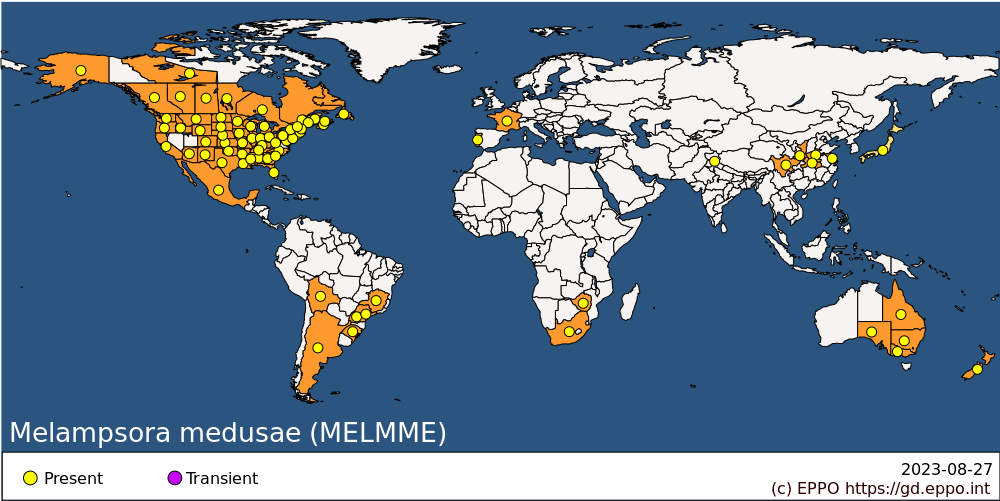 M. medusae f. sp. deltoidis is heteroecious but, in mild climates, the urediniospore stage is able to overwinter in buds and bark of Populus spp. without the need for an alternate host (Walker et al., 1974; Wilkinson & Spiers, 1976). Basidiospores from overwintered telia on Populus infect conifer needles in spring. Pycnia and aecia are produced on these needles, and aeciospores, which may be carried over long distances in the wind, infect susceptible poplars in the summer; these spores cannot reinfect the conifer hosts. The urediniospores produced on poplars can also be carried long distances by wind (Wilkinson & Spiers, 1976). Urediniospores are the main source of inoculum in the Southern Hemisphere and warmer regions of the Northern Hemisphere, in which the overwintering of teliospores with the subsequent spring formation of basidiospores and alternation on coniferous hosts has not yet been observed (Walker, 1975; Sinclair and Lyon, 2005). In its native range (North America), it was shown that M. medusae f. sp. deltoidis alternates in the northern larch-poplar area of sympatry, and then spreads asexually to southern regions without larch (Bourassa et al., 2007).

The penetration of poplar leaves by M. medusae f. sp. deltoidis is accomplished by germ tubes which are formed by the urediniospores. These germ tubes follow the leaf surface and enter the leaf through the stomata with or without forming appressoria. Substomatal vesicles are formed which extend and delimit several cells, of which one functions as the haustorial mother cell; this forms a haustorium and finally establishes the host infection (Spiers & Hopcroft, 1988).

The first symptoms of infection are yellow uredinia, which appear 1-2 weeks after infection on the underside of the leaves (or both sides, in heavy infections). Lower leaves are affected first and then infection spreads over the whole tree; the leaves desiccate and fall prematurely. Trees may be stripped of all foliage within 3 weeks. Similar symptoms may be caused by other Melampsora spp. (M. laricis-populina, M. allii-populina) which are widespread on poplars in Europe.

As for other conifer-alternating poplar rusts, the impact of M. medusae on its aecial host is much lower than on the telial host. The current year's needles become discoloured and necrotic and bear pycnia and aecia. The infected needles die and fall.

In general, size measurements of M. medusae urediniospores are not sufficient for positive identification. However, the presence of smooth (non-echinulate) patches at the equator of urediniospores is a highly diagnostic feature of M. medusae, since no other Melampsora species infecting poplar shares this feature (Vialle et al., 2011). Therefore, morphological diagnosis is quite straightforward (Desprez-Loustau et al., 2007), but it remains time-consuming, especially for detecting a small amount of M. medusae urediniospores in a mixture with those of other more abundant Melampsora spp., which would be likely to be the case in Europe (EPPO Diagnostic Protocol PM 7/93). However, the two formae speciales of M. medusae cannot be distinguished with morphology since they share grossly identical morphological features and can only be distinguished according to their respective host range, or using a DNA-based method (see below).

Aeciospores are 16-21 x 19-26 µm, with wall bilaterally thickened (3-4 µm) on opposite sides. Urediniospores are ellipsoid or obovoid, with wall bilaterally thickened, and with smooth areas at the equator; the smooth areas are best seen when spores are trapped in air bubbles; therefore, when making mounts, the cover slip should be dropped on quickly to include as many bubbles as possible; use x40 objective and x10 eye-piece; varying size measurements are reported: 26-35 x 15-19 µm; 22-36 x 13-21 µm. This variability may result from the fact that urediniospores of M. medusae f. sp. deltoidis are larger than those of M. medusae f. sp. tremuloidis (Shain, 1988). Teliospores 10-15 x 29-45 µm, with wall evenly thick; however, their diagnostic value is too uncertain to be of use.

M. medusae has a high potential for natural spread. Urediniospores of the pathogen can be spread by wind over long distances. Many examples of aerial long-distance dispersal of rust spores across and even between continents have been documented (Brown & Hovmoller, 2002). For instance, Nagarajan & Singh (1990) stated that urediniospores of rust fungi, once they reach an altitude of 1.5-2.0 km, can spread a disease transatlantically and quoted the spread of coffee leaf rust, Hemileia vastatrix, from Angola to Brazil in 1966 as an example of this wind-borne transatlantic spread of rust fungi. Similarly, the dispersal pathway of the emerging Ug99 lineage of the wheat stem rust fungus Puccinia graminis f. sp. tritici from East Africa to Central Asia was modeled (Meyer et al., 2017).

Successful airborne spread of M. medusae f. sp. deltoidis has been reported regarding the introduction of the fungus into New Zealand in 1973. From Australia, where the pathogen had been first recorded in 1972, the fungus spread 2000 km by wind to the islands of New Zealand where it was detected in March 1973 (Wilkinson & Spiers, 1976). High correlations were calculated between the wind patterns in this area and the infected sites in Australia and the newly detected infestation sites in New Zealand (Brown, 1984).

Severe damage by M. medusae f. sp. deltoidis results from premature leaf drop and loss of vigour in young susceptible poplars. In New South Wales, Australia, the disease spread over 1200 ha in 6 weeks (Walker & Hartigan, 1972). The disease was very damaging in both Australia and New Zealand in the 1970s, where poplar has been introduced into a new environment. However, in eastern Canada where M. medusae f. sp. deltoidis is native, extensive damage has also been reported on poplars in nurseries and plantations as well as in natural forests.

M. medusae f. sp. deltoidis has been reported in southwestern France at sporadic intervals for more than 50 years but is rare and of no economic significance (Pinon & Frey, 2005; Desprez-Loustau et al., 2007; Husson et al., 2013). This may be due to environmental factors which seem to limit its spread, probably because of overwintering problems, host alternation and/or ecological constraints (Pinon, 1986). It should be recalled that the other European Melampsora spp., especially M. laricis-populina, cause very similar symptoms and damage in European poplar plantations, and have been, up till now, of much greater significance (Pinon & Frey, 2005).

M. medusae f. sp. deltoidis has spread rapidly in Australia and New Zealand and this emphasizes the potential threat to Populus spp. The susceptibility and uniformity of the poplar stands encountered may facilitate spread.

Some resistant poplar cultivars are available and can be indirectly selected for resistance by the number and rate of closure of the stomata (Siwecky, 1974). Prakesh & Heather (1989) reported on the partial resistance of P. deltoides clones against two races of M. medusae f. sp. deltoidis, but also stressed the need to maintain a wide host diversity to manage the disease.

M. medusae f. sp. deltoidis is very damaging in part of its range, and susceptible poplars (e.g. P. nigra) are important tree species in the EPPO region, both for wood production and for ecosystems services. The isolates of M. medusae f. sp. deltoidis currently present in Europe do not seem aggressive and have had no tendency to spread over many decades; as such, they present little risk to other European countries. However, there is a risk that one of the known aggressive isolates of M. medusae f. sp. deltoidis may be introduced into the EPPO region, which could then cause serious losses, particularly in areas with a mild winter where no alternate host is required. Moreover, M. medusae has been shown to be able to hybridize with other Melampsora spp., especially M. laricis-populina, thus leading to the emergence of new fungal pathogen taxa and novel host‐pathogen associations.

M. medusae f. sp. tremuloidis has only been recorded on the American aspen (P. tremuloides), a species which is only occasionally used as an ornamental in the EPPO region and is therefore a lower risk than M. medusae f. sp. deltoidis.

Import of plants for planting of conifers, and Populus with leaves, is prohibited in many EPPO countries (e.g. the EU, EFSA PHL Panel et al., 2018).

To limit the risk of introduction of the rust via infected plant material, plants for planting (other than seeds) and cut branches (including Christmas trees) of Larix, Picea, Pinus, Populus, Pseudotsuga and Tsuga should have been grown in a pest free area for M. medusae or in a place of production which has been confirmed free from the rust during the preceding growing period (EPPO Standard PM 8/2 Coniferae; EPPO Standard PM 8/7 Populus).

It may be noted that the EU has recently revised the quarantine status of M. medusae and now only regulates M. medusae f. sp. tremuloidis as a quarantine pest (EFSA PHL Panel et al., 2018; EU, 2019).

Brown JKM, Hovmoller MS (2002) Aerial dispersal of pathogens on the global and continental scales and its impact on plant disease. Science 297, 537-541.

This datasheet was extensively revised in 2021 by Pascal Frey (INRAE, Nancy, France). His valuable contribution is gratefully acknowledged.

This datasheet was first published in the EPPO Bulletin in 1982 and revised in the two editions of 'Quarantine Pests for Europe' in 1992 and 1997, as well as in 2021. It is now maintained in an electronic format in the EPPO Global Database. The sections on 'Identity', ‘Hosts’, and 'Geographical distribution' are automatically updated from the database. For other sections, the date of last revision is indicated on the right.