Ips sexdentatus attacks mainly pines. In Northern Europe, I. sexdentatus is found on Pinus sylvestris, and in Central and Southern Europe it is also found on P. pinaster, P. heldreichii and P. nigra. In Turkey, Georgia and Southern Russia, it occurs on Picea orientalis. It is occasionally recorded on species of Picea, Abies and Larix. In Asia, I. sexdentatus occurs on Pinus armandii and other species of Pinus (Izhevsky et al., 2005; EFSA, 2017; Douglas et al., 2019). 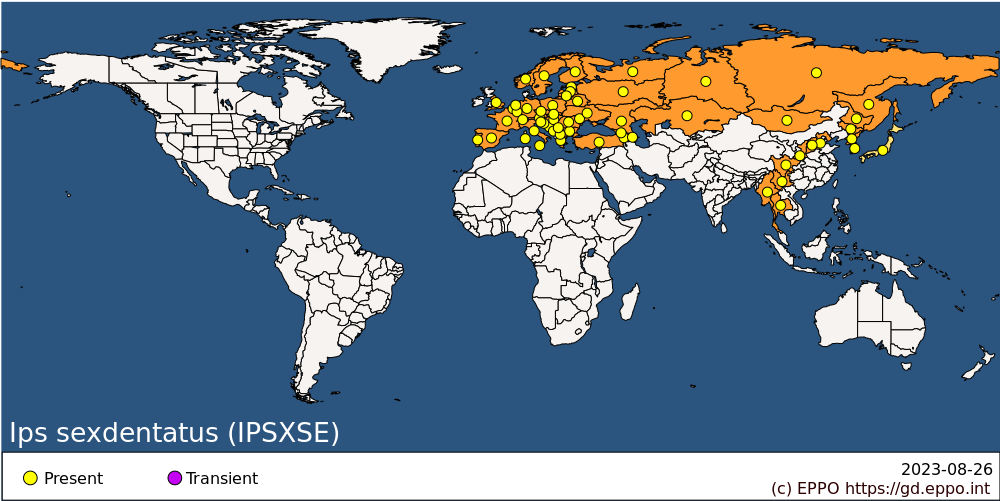 The species has only one annual generation north of the Arctic Circle, two generations in central areas of Eurasia and up to five generations in the Mediterranean area and in other areas with a long, warm summer season. The spring flight starts when the temperature exceeds about 20°C; in the north this is in May/June, and in more southern areas in March/April. The male beetle initiates the boring and releases an aggregation pheromone consisting mainly of ipsdienol (Vité et al., 1974). After having excavated a nuptial chamber in the phloem, each male is joined by one to five females, which each bore a maternal gallery in the phloem, parallel to the fibres. Single eggs are laid at regular intervals along these galleries. After oviposition, the parent adults re-emerge and often establish sister broods either on the same tree or on a new host-tree. Each larva excavates an individual gallery perpendicular to the maternal gallery. Pupation occurs in a small niche in the phloem, at the end of the larval gallery. Productivity varies between Pineau et al., 2017). Brood development from the start of gallery construction until 1 and 60 offspring per female and is inversely correlated to attack density (the emergence of the new generation adults may take 2-3 weeks at a constant laboratory temperature of 27°C and 3-4 weeks at 22°C. No gallery construction and brood production is observed a constant temperature of 12°C.  Overwintering takes place as adults under the bark, in stump cracks or in forest litter. The supercooling point in hibernating adults is about -19°C, whereas in larvae it is only -9°C (Bakke, 1968). Pathogenic ophiostomatoid fungi may be carried by I. sexdentatus beetles, some of them in pit mycangia on the body (Levieux et al., 1991) and are inoculated to the host tree (Kirisits, 2004; Romon et al., 2008; Bueno et al., 2010; Jankowiak, 2012). They cause blue staining of the wood and some of them can contribute to tree death.  A general description of the biology and ecology of I. sexdentatus is provided by Chararas (1962), Bakke (1968) and Levieux et al. (1985) as cited in EFSA (2017).

Reproduction occurs under thick bark on plant hosts. The gallery system has two to four female galleries up to about 1 m in length, half running in one direction half running in the opposite direction. Larval galleries are 8-10 cm long. The wood under the gallery is stained blue from fungi transferred by the beetles (Chararas, 1962). As in the case of other conifer bark beetles, I. sexdentatus acts as a vector for a bluestain fungus (Ophiostoma brunneo-ciliatum) which also damages the tree (Lieutier et al., 1989).

I. sexdentatus is the largest beetle of the genus Ips, at 6-8 mm in length. The adults are dark brown or black and cylindrical. Both sexes have six spines at each side of the elytral declivity. The fourth spine is the largest and is capitate. Only the female has a longitudinal stridulatory organ on the upper hind part of the head. The larvae are legless, with a dark amber cephalic capsule (Balachowsky, 1949; Chararas, 1962; Grüne, 1979; Izhevsky et al., 2005; Douglas et al., 2019).

I. sexdentatus can be detected by visual examination, often after damage symptoms are seen, and by pheromone trapping. The species can be identified by examining morphological features, for which taxonomic keys exist, e.g. Grune (1979); Schedl (1981); Wood (1982); Douglas et al. (2019). The standing trees attacked by I. sexdentatus die during the colonisation process, with an obvious discolouration of their crown, which becomes brown and then grey after the needles have shed. During the attacks, brown sawdust is expelled from the entry holes and, when the broods have metamorphosed and the young adults start feeding on the phloem around the galleries, the bark can flake off. This phenomenon can be amplified by the action of woodpeckers. Within and under the phloem, maternal galleries, parallel to the fibres and up to 50 cm long, and transversal larval galleries can be seen. Pheromone lures and traps are commercially available for I. sexdentatus but, because of the large dispersal capacity of the pest, trap catches do not necessarily reflect correctly local establishment. The sapwood of trees shows blue staining due to the fungi introduced by the beetles (Izhevsky et al., 2005; EFSA, 2017).

Laboratory experiments have shown that adult Ips spp. can fly continuously for several hours. Jactel & Gaillard (1991) found, for example, that in a sample of 38 beetles, 98% could fly >5 km, 50% >20 km and 10% >45 km. The speed of flight was constant and equalled 1.3 m/s. In the field, however, flight has only been observed to take place over limited distances and then usually downwind. Beetles have been found in the stomach of trout in lakes 35 km from the nearest spruce forest, probably carried by the wind (Nilssen, 1978). Dispersal over longer distances occurs via transportation of the pest under the bark of wood commodities.

This species is of low significance as a pest in Northern and Central Europe. In Europe, I. sexdentatus preferentially colonise weakened pines, cut logs or wind-felled trees, trees affected by forest fires or drought-stressed trees (EFSA, 2017). The infestation by I. sexdentatus of Pinus sylvestris and P. radiata, suffering from drought stress in Central and Southern France, Northern Spain and Portugal, has resulted in pine death (Goix, 1977; Perrot, 1977; Lieutier et al., 1984; Ferreira & Ferreira, 1986; Lieutier et al., 1988; Paiva et al., 1988; Cobos-Suarez & Ruiz-Urrestarazu, 1990). I. sexdentatus often attacks trees together with other pests (Ips acuminatus, Tomicus piniperda).  The pest carries pathogenic ophiostomatoid fungi. These cause blue staining of the wood and some of them can contribute to tree death. However, I. sexdentatus can also attack living trees when population levels are high (Rossi et al., 2009; Pineau et al., 2017). In Turkey and Georgia, I. sexdentatus is a major primary pest of Picea orientalis, attacking living trees (Schimitschek, 1939; Lozovoj, 1966; Ozcan et al., 2011). In European Russia, I. sexdentatus is often associated with pine plantations of 50-100 years old (Izhevsky et al., 2005).

The main control measures for I. sexdentatus are similar to those used for the control of other bark beetle species. The most effective measure is to remove infested trees from the forest before the new generation of adult beetles emerges. Sanitation felling of infested trees involves the harvesting of windthrown trees (to remove breeding substrates), as well as the felling of infested standing trees. In order to prevent the further development of bark beetles (pupae or young adults inside the bark) the immediate debarking of logs is recommended, followed by the destruction, processing or composting of the bark. Pheromone mass-trapping can also be implemented locally. Quarantine measures should be implemented to prevent entry into the zones, where I. sexdentatus is absent. The main pathways of entry are: wood commodities of plant hosts, bark and wood packaging material (including dunnage) from countries where the pest occurs.

I. sexdentatus is not recommended for regulation as a quarantine pest by EPPO. It is not generally a primary pest and is only capable of attacking trees already suffering stress, either environmental or from other pests. It is already very widespread in Europe. It is a protected zone quarantine pest in Ireland and Cyprus under the EU regulations (EPPO GD, online, accessed in 2021; EFSA, 2017) and it had the same status in the United Kingdom (for Northern Ireland and Isle of Man) until the end of 2020. These are the principal areas facing a certain risk from this pest. I. sexdentatus is unlikely to spread to these areas naturally, therefore phytosanitary measures could be justified. However, it should be stressed that I. sexdentatus is a much less important pest than I. typographus (EPPO/CABI, 1996), and presents a much lower risk than that species.

Wood commodities, bark and wood packaging material are considered as pathways for this pest, which is also able to disperse by flight over tens of kilometres. Ips species are regularly intercepted on wood, wood packaging material and dunnage. During the period from 1985–2000, among the 2 740 Scolytinae intercepted at the US ports of entry and identified to species, 157 I. sexdentatus were found (Haack, 2001). In the Europhyt database, there are in total 66 interceptions of Ips species in the EU countries (in 1994–2017), all on coniferous wood or wood packaging material. For I. sexdentatus, there were two records of interceptions, one from Bulgaria on coniferous wood and one from Ukraine on P. sylvestris wood (EFSA, 2017).

If it is judged necessary to take phytosanitary measures against I. sexdentatus, measures equivalent to those taken against I. typographus would be effective. The following phytosanitary measures recommended by the EPPO Standard PM 8/2 (3) ‘Coniferae’ (EPPO, 2018) are considered to be effective against bark beetles including I. sexdentatus. Plants for planting, cut branches (including cut Christmas trees), round wood or other parts of the host plants of I. sexdentatus from countries in which this pest is present should originate from a pest-free area. If not, the following phytosanitary measures are required to import round wood from the area where the pest is present: wood should be bark-free or heat-treated (EPPO, 2009a), or fumigated with an appropriate fumigant, or treated with ionizing radiation (EPPO, 2009b). Harvesting wood residues, processing wood residues, hogwood and wood chips of the host should be produced from debarked wood or heat-treated. The heat treatment is also required for import of isolated bark. Wood packaging materials should meet requirements of ISPM no. 15 (IРРС, 2018). When wood with bark is moved in international trade, it should be stored and transported through the pest-free areas, or outside of the pest flight period, or to be in closed containers to prevent infestation.

Chararas C (1962) [A biological study of the scolytids of coniferous trees].  Encyclopédie Entomologique 38 (In Spanish).

Jactel H and Gaillard J (1991) A preliminary study of the dispersal potential of Ips sexdentatus with an automatically recording flight mill. Journal of Applied Entomology 112, 138-145.

This datasheet was extensively revised in 2021 by Dr. O.A. Kulinich. His valuable contribution is gratefully acknowledged.

This datasheet was first published in 1997 in the second edition of 'Quarantine Pests for Europe' and revised in 2021. It is now maintained in an electronic format in the EPPO Global Database. The sections on 'Identity', ‘Hosts’, and 'Geographical distribution' are automatically updated from the database. For other sections, the date of last revision is indicated on the right.