In the literature also referred to as Fomes annosus or Heterobasidion annosum P ISG (intersterility Group).

In North America, the main hosts of H. irregulare include Calocedrus decurrens, Juniperus occidentalis, Pinus ponderosa and P. jeffreyi on the West Coast; and P. taeda, P. elliottii and P. resinosa on the East Coast. In Italy, the main host is Pinus pinea, although based on sporadic observations and inoculation studies P. halepensis and P. sylvestris may be regarded as hosts.

Both in North America and Italy, infection is reported on a few ericaceous hosts but should be regarded as a spill over from infected conifers, particularly from pines.

The pathogen is native to North America and was introduced into Italy during the 1940s through the movement of infected wood. Its range in both Eastern and Western Canada is undergoing a Northward expansion from areas bordering the USA where the pathogen is endemic (Bérubé et al., 2018; Laflamme, 2013). In Italy, its range is currently limited to coastal and hillside pure pine stands or pine-oak woodlands of the Latium (Lazio) region. The pathogen is also present in urban parks in and near the City of Rome (Gonthier et al., 2014). 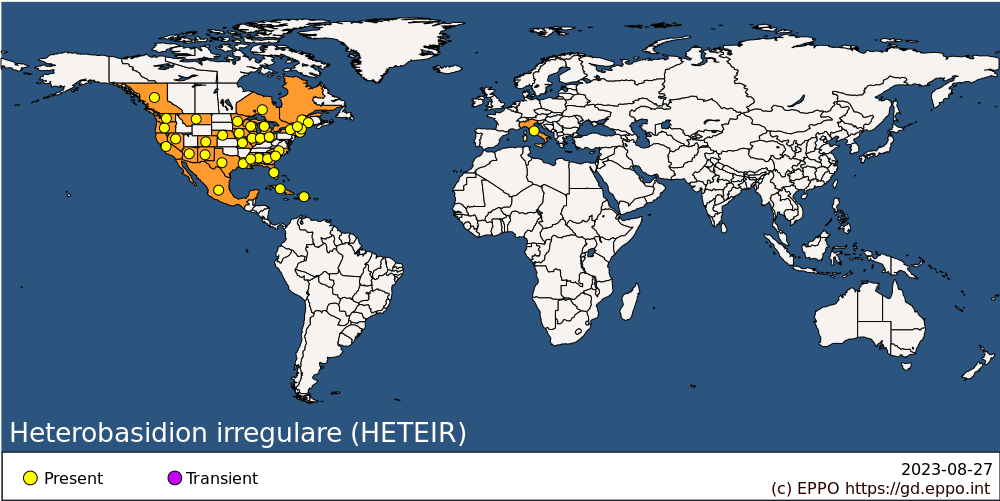 The pathogen colonizes the cambial layer and the outer xylem of trees, where it causes a typical white laminated decay. Infection is limited to the lower part of the stem, the root collar and the root system. Trees of all ages can be infected and killed because of cambial necrosis resulting in girdling of the plant. Rare branch infections associated with cuts or breakages have been reported. Root infection can be extensive and is responsible for secondary tree-to-tree or stump-to-tree disease transmission through growth of vegetative fungal hyphae in the xylem, cambium, or, depending on the soil type, ectotrophycally on top of the bark. Primary infection is carried out basidiospores (meiospores) landing on freshly cut stumps, or more rarely landing on wounds, on root collars or percolating through the soil to the roots. Basidiospores of Heterobasidion spp. are produced all year round in temperate climates, but are not produced during the winter in Boreal or Alpine forests when temperature is below 5°C. Likewise, temperatures over 30°C depress sporulation. Fruiting bodies are produced on stumps or on fallen trees or those which recently died. Conidia (mitospores) are produced by characteristic conidiophores in culture but their role in nature is yet to be determined. Biology is summarized in Garbelotto & Gonthier (2013).

Infection of trees normally results in resinosis, or profuse production of pitch in the part first colonized by the pathogen. Because the wood impregnated by resin becomes particularly resistant, it may remain solid and visible after most of the tree has been decayed. Infected trees will develop the following symptoms: thinning of the canopy by early drop of the older needles, until only 1-year old needles are retained: this results in an overall appearance of the branches called 'lion tailing’; canopy colour will shift from bright green to opaque or olive green; tree mortality will eventually ensue with progressive death of the canopy starting from the top and moving downwards. Because of tree-to-tree contagion through the root system, older infestation will result in patches of adjacent trees being killed, with trees in the middle being dead and standing for a longer period of time (e.g. trees stripped of needles, twigs, minor branches and bark), and trees in the periphery being either dead and standing for a shorter period of time (e.g. trees still retaining some needles, twigs and small branches) or alive and infected showing the symptoms described above. These infestations are normally referred to as disease centres.  If pines are being infected, often regeneration in the middle of these disease centres will be by non-pines. Mortality is often apparent around stumps that served as initial infection courts for the pathogen. Infection of stumps normally results in a smooth topped and weathered wood layer, 2-4 cm thick, under which decay may be ongoing. However, stumps displaying decay on their top surface were infected as trees and were cut down post infection. Often, dead seedlings and saplings can be seen, especially if growing near infected trees and/or stumps. Symptoms are described in Garbelotto & Gonthier (2013) and in EPPO (2020a).

Fruiting bodies are normally stipe-less shelf-shaped conks or resupinate. Fresh one-year conks are relatively soft, but never spongy, normally dark brown or with an alternation of darker and lighter concentric striations, sometimes turning to green. The top of the conk hardens with time, but is never laccate. Margin is rounded but not prominent. Fruiting bodies will persist for multiple years, with the addition of buff or cream coloured pore layers each year. Pores are visible but small, making pore surface translucent when slightly rotating fruit body. Many irregular elongated pores are normally visible. The size and location of the fruiting bodies is determined by climatic conditions. In drier areas, fruiting bodies range in size from less than a cm (referred to as ‘pop corns’) to about ten-fifteen cm and are normally produced at or under the duff layer. In more mesic climates, fruiting bodies can be up to 40 cm in length and are produced at the base of the tree or stump, or on the roots, but can be above the duff layer (Otrosina and Garbelotto, 2010). Decayed wood is often laminated, with white pits visible. Sometimes wood fibres are embedded in a fungal mat. Extensive decay results in hollow pockets. In culture, the fungus produces hyaline hyphae, with colony mostly appressed and only sometimes slightly fluffy. Clamps are present but rare. Conidia are abundant and produced in a single layer atop bulb shaped conidiophores. See Garbelotto and Gonthier (2013) and EPPO (2020a) for more details.

Detection and identification methods have been thoroughly described in EPPO (2020a). As for other Heterobasidion species, the detection of H. irregulare in the forest is based on the examination of symptoms and the ﬁnding of fruiting bodies. Detection should be complemented by the analysis of samples collected in the ﬁeld with molecular tests, which provide the only reliable way to accurately identify the pathogen. In addition to the symptoms described above, infected but not yet dead trees, whether on their own or part of a disease centre, display top portions of the canopy progressively browning. Fruiting bodies may engulf root collar of seedlings and saplings, or may develop underground on woody roots.

Positive identification at the genus level can be done only by finding fruiting bodies, by culturing the fungus from infected wood or fruiting bodies and looking for the characteristic conidiophores described above, by observing the conidiophores directly on freshly-cut healthy wood disks exposed 7-10 days before to the air for 2-24 hours to capture airborne basidiospores, or by direct DNA analysis from fruiting bodies or symptomatic wood tissues. As morphological traits are partially overlapping among Heterobasidion species, identiﬁcation of H. irregulare based on morphology of fruiting bodies is not reliable. Species-level diagnosis requires DNA-based tests (see EPPO (2020a), Lamarche et al., 2017, Sillo et al., 2018, Ioos et al., 2019, Shamoun et al., 2019, and references within).

Natural spread in the range of tens of metres via root-to-root contagion of adjacent trees. Natural spread by airborne basidiospores, in the range of hundreds of metres and occasionally a few kms (Garbelotto et al., 2013). Spread by moving infected wood possibly used for the construction of boxes, crates and general equipment was likely responsible for movement of the pathogen from North America to Europe. Use of infected wooden posts for the construction of fences is known to spread the pathogen short to medium distances. In two instances, once in California and once in British Columbia, Canada, detection of the pathogen occurred in planted trees in arboreta, suggesting live plants may be a pathway for its movement (Shamoun et al., 2019). Movement on untreated lumber, green wood and bark is a likely pathway for spread. Disposal of infected stumps and dead trees is likely to result in movement of the pathogen. Information above is based on Garbelotto & Gonthier (2013) and Gonthier et al. (2014).

The pathogen may greatly affect timber production by reducing tree growth and causing mortality, especially in intensively managed forests established on former agricultural land. In Italy, where H. irregulare is mainly associated with Pinus pinea, mortality caused by the pathogen has been reported to affect pine-nut production industry, as well as the important recreational use that the affected stands offer. It should be noted that the pathogen may also facilitate tree failures.

Prompt treatment of stump surfaces with chemicals such as borates and urea or with spore suspensions of the competitor fungus Phlebiopsis gigantea have all been shown to be effective in reducing initial establishment of the pathogen (see Garbelotto & Gonthier 2013, Dumas & Laflamme 2013 and references within). Performing silvicultural treatment or tree management practices in periods with low inoculum pressure (very hot summers at low latitudes, and winters in alpine regions or at high latitudes) are known to reduce primary infection. Prompt removal of infected trees, especially if combined with stump removal will reduce the rate of spread locally, or even eliminate establishment if performed in a timely fashion. Trenching may slow down local spread, if performed including removal of at least two rows of healthy trees and stumps near symptomatic trees. Removal of coarse woody debris and stumps may reduce saprobic survival of the pathogen in soil. Likewise, chipping of stumps may reduce the ability of the fungus to fruit, thus reducing inoculum potential (amount of airborne spores). Reducing the density of hosts, planting them intermixed with non-hosts will reduce secondary tree-to-tree contagion. Use of resistant germplasm of host species is not yet possible but may be a possibility in the future. Control approaches are summarized in Garbelotto & Gonthier (2013) and in Gonthier et al. (2014). An EPPO Standard describing procedures for official control is also available (EPPO 2020b).

H. irregulare has the potential to establish throughout the EPPO region where Pinus occurs, possibly up to the northern distribution border of the native European pine-associated H. annosum (62°N in Sweden). It is likely to be damaging on P. pinea throughout the Mediterranean and to add to the impact by H. annosum on other hosts throughout EPPO region. Impacts include pine mortality, lower success of pine regeneration, and reduction in pine timber yield.

Although similar in the biology and life cycle to the native H. annosum, H. irregulare has comparative advantages that influence impact (much higher fruiting and saprobic ability resulting in a much higher transmission potential; higher spore production, resulting in higher rates of primary infection; saprobic ability, leading to a higher inoculum potential in the secondary spread of the disease, thus possibly a higher rate of spread through root contacts) (Gonthier et al., 2014). In addition, hybridization occurs between H. irregulare and H. annosum providing an additional risk in the long-term for increased virulence (possibly of the two species) (Gonthier et al., 2014). All pine species of the EPPO region have been suggested to be at risk in the long term (EPPO, 2015). Damage in the long-term has been predicted to be substantial throughout the EPPO region, and significantly increased compared to that of European Heterobasidion species (EPPO 2015).

Risk management options have been identified for conifer wood, for conifer particle wood and waste wood, and for plants for planting (EPPO, 2015). Wood packaging material should be treated according to ISPM 15 Regulation of wood packaging material in international trade.  Detailed procedures for the eradication or containment of H. irregulare, including options for the disposal of wood are available (EPPO 2020b).

This datasheet was prepared in 2020 by Matteo Garbelotto (University of California – Berkeley, USA) and Paolo Gonthier (University of Torino, Italy). Their valuable contribution is gratefully acknowledged.