Citrus scab caused by E. fawcettii is widely distributed, but mainly occurs in humid citrus-growing regions in the world. Although both the anamorph Sphaceloma fawcettii and the teleomorph E. fawcettii have been described based on material collected in São Paulo, Brazil, there is not sufficient information available to consider that the origin of the fungus is in Brazil or in South America. In addition, the distribution history of citrus scab caused by E. fawcettii is unknown. Citrus-growing regions in the tropics are particularly affected by scab disease. In the North Temperate Zone, the disease distribution is still restricted, and Georgia is presently the only country in the EPPO region with a confirmed record. 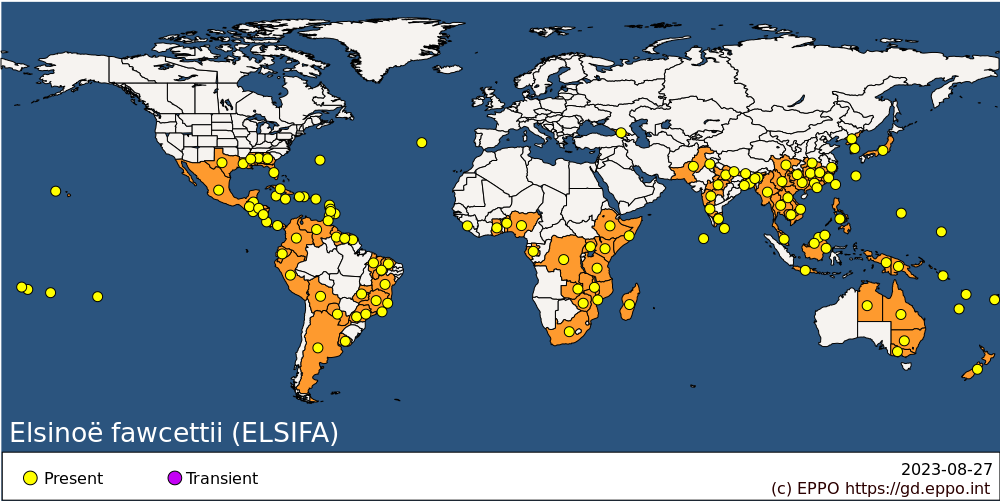 Inoculum for new infections consists mainly of conidia. These are produced in the acervuli on the surface of scab lesions on young fruits and leaves throughout the year. E. fawcettii produces two types of conidia: hyaline conidia and coloured, spindle-shaped conidia. Hyaline conidia are one-celled, elliptical, and represent the primary source of inoculum. Their survival and infectious ability are reliant on wet conditions, and they quickly die if exposed to dry conditions. Spindle-shaped, dark-pigmented conidia are formed on scab lesions and may germinate to produce hyaline conidia (Timmer et al., 1996; Whiteside, 1975). Conidia are formed abundantly on wet scabs, in a nearly saturated atmosphere at optimum temperature between 20 and 28°C. Dispersal occurs mainly by rain or water splash, but winds in excess of 2 m.s-1 can disseminate spindle-shaped conidia over short distances. Infection severity depends on the available inoculum load and the incidence of wetting periods. Germination of conidia and infection do not require liquid water, both processes being possible with dew, fog or under high moisture conditions. A minimum wetness period of 1-2 h is needed for sporulation, while a wet period of 2.5-3.5 h is needed for conidial infection (Timmer, 2000). Scab incidence is usually much higher in low areas with frequent wetting, compared to elevated areas (Chung, 2011). The temperature range required for germination of conidia is 13-32°C, but infection does not take place below 14°C or above 25°C (Whiteside, 1975). The incubation period is of at least 5 days. The optimal temperature for disease development is 24-27°C (Timmer, 2000).

The sexual form of E. fawcettii is very uncommon and has been reported only in Brazil (Bitancourt & Jenkins, 1936). Stromata contain numerous spherical asci, each harboring eight filamentous hyaline ascospores (Holliday, 1980). There is no information available on the role played by the ascospores in the disease propagation.

E. fawcettii is able to survive in scab pustules on leaves, fruits and twigs remaining on the tree (Chung, 2011), providing the inoculum for the next season. Even in resistant cultivars, the fungus can survive on diseased shoots sprouting from susceptible rootstocks (Whiteside, 1975, 1988; Yamada, 1961).

Citrus scab symptoms vary with the age of infected tissues and among cultivars (Chung, 2011). Lesions on young leaves begin as minute water-soaked spots which subsequently evolve into amphigenous, creamy-yellowish or variously bright-coloured pustules (EPPO/CABI, 1992). These lesions grow as irregular, globose or conical excrescences, which coalesce and extend mostly along the main veins to cover a large part of the blade, particularly on the lower surface. The central area of these wart-like outgrowths is depressed and becomes drab, greyish and velvety when the fungus is fruiting. Old scab lesions have a rough surface, are dusky-coloured and become cracked and fissured. Affected leaves become stunted, malformed, wrinkled or puckered, with irregular torn margins. Defoliation often follows severe infections. Similar warty lesions and corky eruptions are formed on young twigs, tender shoots and stems of nursery plants, which can grow bushy and stunted. Also blossom pedicels and buttons are susceptible to infections.

Fruits are infected in the early stages of their development, grow misshapen and are subject to premature fall. On the rind of developed fruits, raised lesions are formed with different shapes, sizes and colours according to species and cultivar affected. They appear as scattered protuberances, conical projections or crater-like outgrowths or they coalesce to give scabby patches or extensive areas of fine eruptions. Scab however does not extend to the flesh (CABI, 2020). E. fawcettii scabs are typically irregular, warty and deeply fissured.

Citrus scab may be confused with other diseases, e.g. bacterial canker (Xanthomonas citri pv. citri) and melanose (Diaporthe citri), or with injuries caused by various agents (e.g. rub scratches caused by wind), and it is difficult to differentiate it based on symptoms alone (Fawcett, 1936; Brun, 1971; Knorr, 1973; Klotz, 1978; Whiteside et al., 1988).

Acervuli intra-epidermal or sub-epidermal, scattered or confluent, pseudoparenchymatous. Conidiogenous cells originated from the upper cells of the pseudoparenchyma or from the hyaline or pale-brown phialidic conidiophores, which have 2-4 septa. Conidia hyaline, unicellular, ellipsoid, biguttulate, 3-4 x 4-8 µm (Timmer, 2000). Mycelium hyaline, scanty, septate, short-branched. Colonies in culture very slow-growing, beige to tan or vinaceous to black, well raised above the agar surface and covered by tufts of short erect hyphae. Most strains of E. fawcettii secrete red pigments after 10-15 days incubation in the light (Gopal et al., 2014).

The anamorphs of E. fawcettii and E. australis are practically identical. Thus, it is difficult to obtain reliable identification and differentiation based on morphology alone (Sivanesan & Critchett, 1974a, b, c).

Other pathogens of citrus cause lesions similar to those of citrus scab, therefore, detection cannot be based solely on the visual observations of symptoms. Isolation of the fungus is very challenging, but semi-selective media containing antibiotics and fungicides (dodine) have been developed to successfully isolate E. fawcettii from scab lesions (Whiteside, 1988). For species separation, Timmer et al. (1996) found out that it is not possible to distinguish Elsinoë species by cultural characteristics such as conidial size and shape and colony colour, and they are more reliably differentiated by pathogenicity. Pathogenicity tests have been implemented for species and pathotype identification (Timmer et al., 1996, Tan et al., 1996). In addition, the possibility of using immunochemical methods for pathogen detection has been envisaged (Peláez Abellán et al., 1986).

For molecular methods, a PCR test based on random amplified polymorphic DNA (RAPD) of ITS sequences has been used for differentiating E. fawcettii from E. australis (Tan et al., 1996) and partially resolved E. fawcettii pathotypes (Hyun et al., 2009). In addition, specific primers have been successfully used in the detection of both species individually. The PCR tests are effective  for either fungal cultures or infected plant tissues. Combined analysis of several genetic loci is more effective for distinguishing Elsinoë species causing citrus scab (Hyun et al., 2009; Fan et al., 2017). Sequence analysis of the internal transcribed spacer (ITS) region and the translation elongation factor 1 α (TEF) gene clearly distinguished isolates of E. fawcettii and E. australis, and provided fixed nucleotide differences that distinguished subgroups separated by RAPD-PCR within the two species. Fan et al. (2017) employed combined analyses of ITS, LSU, rpb2 and TEF1-α DNA to refine the phylogeny and taxonomy of Elsinoë with descriptions of new species based on isolates originally identified as causal agents of citrus scab.

Validated international protocols for detection and characterization of E. fawcettii are currently not available.

Long-distance movement of E. fawcetti can occur via international trade of plants for planting of host species (excluding seeds) and citrus fruits (with or without leaves and peduncles) originating in infected countries. Local and short-distance dissemination of the pathogen is mostly due to rain (or irrigation water), although insects and, to a certain extent, wind-carried water droplets containing spores may contribute to its spread.

In citrus orchards, E. fawcettii affects mostly sour oranges and susceptible cultivars of lemons, mandarins, tangelos and grapefruits, whereas most cultivars of oranges and limes are less or not affected. The disease is particularly serious in the nursery on susceptible rootstocks, such as sour oranges, rough lemons, Poncirus trifoliata and Citrus limonia (CABI, 2020). It may stunt seedlings or make them bushy and difficult to bud. Scabs are present, particularly on the young growth. Citrus scab causes yield and quality losses. Infected fruits present superficial damage produced by scabs, they are scarred and distorted and consequently unmarketable.

Citrus scab is important only in areas where susceptible species or cultivars of citrus fruit are grown for the fresh market and where young plants or new growth develops under favourable conditions of temperature, moisture and shade (CABI, 2020). Losses largely depend on seasonal and local weather conditions and impact may be extremely reduced in areas with a limited annual rainfall of less than 1300 mm.

In Uruguay, Bernal (2000) reported that untreated plots in untreated plots, up to 98% of fruit had to be rejected due to to scab (Elsinoë sp.). The disease incidence was reduced to 0.7–7.4% after applying fungicides. In Florida, Whiteside (1974, 1981) indicated a scab incidence caused by E. fawcettii from 15% to 78% of affected fruit in untreated control plots. It is not known and even difficult to predict if agronomic practices and climatic conditions in the citrus-growing areas of the EPPO region will lead to similar levels of impact.

Scab disease caused by E. fawcettii can be controlled by agricultural practices, sanitation and chemical treatments. Management measures may include the use of resistant citrus cultivars (Ieki, 1982; Yoshida & Shichijo, 1984; Reddy et al., 1986), as well as adequate tree spacing, row orientation and pruning in order to improve orchard ventilation. Sanitation measures represent the most effective strategy for scab management and aim to eliminate inoculum sources of E. fawcettii, through burial of fallen infected leaves, removal of symptomatic fruits, and destruction of all diseased trees. In countries where the disease occurs, chemical control is widely used and several synthetic fungicides such as benomyl, thiophanate methyl, azoxystrobin, trifloxystrobin, pyraclostrobin, ferbam, and copper compounds have been proven to be effective. When using copper in preventive treatments, several sprays are needed, as the entire fruit surface must be continuously covered by a copper layer during the susceptible stage (Gopal et al., 2014). However, sustainability of chemical control requires the use of appropriate fungicide spray programmes (González, 1980; Rao, 1983; Reddy et al., 1983). In Argentina, two chemical sprays are applied for the control of citrus scab; the first one when 25% of the flowers are open and the second one 7–10 days after the first treatment (Timmer, 2000; Schultz et al., 2013). In Florida, a control programme with two fungicide sprays, one at petal fall followed by a second one 2–3 weeks later, is used (Chung, 2011). As extensive use of these chemicals may lead to harmful effects on the human health and the environment, alternative treatments using plant extracts have been tested with positive effect in vitro (Rehman et al., 2016). Repeated applications of fungicides may also lead to the development of resistance in E. fawcettii. Benzimidazole-tolerant strains of E. fawcettii have been detected in the USA (Florida), Uruguay (Whiteside, 1980; Bernal, 2000) and New Zealand (Tyson & Fullerton 2001).

In many countries of the EPPO region, the import of plants for planting of Citrus, Poncirus, Fortunella, and their hybrids from other parts of the world, is prohibited. Restrictions on fruit trade are also usually implemented. It can be requested that fruit should originate from pest-free areas or from pest-free places of production as demonstrated by crop inspections and laboratory testing prior to export, and that fruit are exported without leaves and peduncles.

Bernal RP (2000) Occurrence of citrus scab strains resistant to benzimidazoles in the northern part of Uruguay and the evaluation of new fungicides to control this disease. Proceedings of the International Society of Citriculture IX Congress, 3–7 December 2000, Orlando, Florida, USA, pp. 984–986.

This datasheet was extensively revised in 2020 by Clovis Douanla-Meli. His valuable contribution is gratefully acknowledged.

This datasheet was first published in the CABI/EPPO 'Quarantine Pests for Europe' in 1992 and updated in the second edition in 1997, as well as in 2020. It is now maintained in an electronic format in the EPPO Global Database. The sections on 'Identity', ‘Hosts’, and 'Geographical distribution' are automatically updated from the database. For other sections, the date of last revision is indicated on the right.