B. minax has erroneously been considered synonymous with B. tsuneonis (EPPO/CABI, 1996).

B. tsuneonis is found exclusively on Rutaceae, such as Citrus, especially mandarin (C. reticulata), and Fortunella spp., the former being the main potential hosts in the EPPO region. The USDA Compendium of Fruit Fly Host Information (CoFFHI) (Liquido et al., 2019) provides an extensive host list with detailed references.

This species is restricted to parts of Japan and southern China. Older records from Taiwan and Vietnam are considered unsubstantiated and not confirmed. 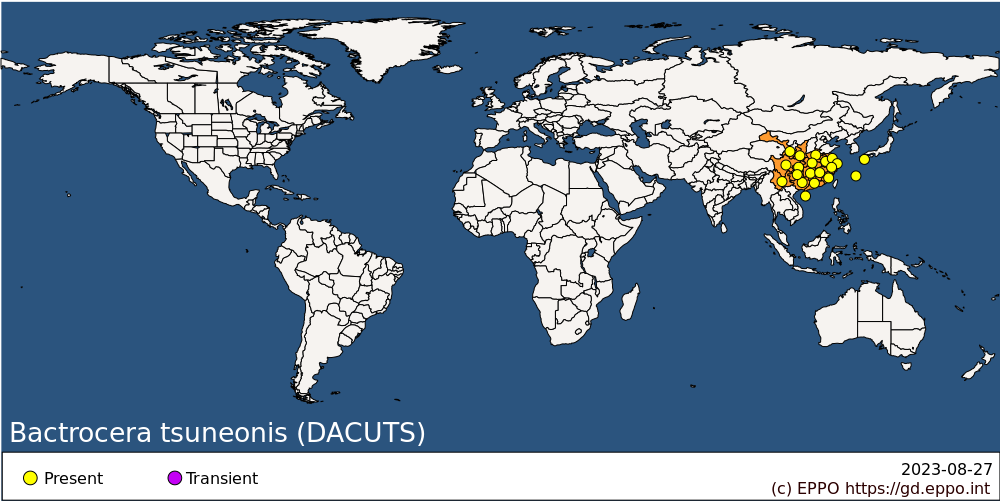 Little is known about the biology of B. tsuneonis. The general life cycle is considered similar to the one of other Bactrocera species infesting fruits: eggs are laid below the skin of the host fruit. Three larval stages develop inside the fruit, feeding on the plant tissue. Once mature the third instar larva will leave the fruit, dig down into the soil and turn into a pupa enclosed in a puparium. In China, B. tsuneonis is reported to have a single generation per year and to overwinter as a pupa in the soil (Zhang, 1989). Yasuda et al. (1994) suggest that the species has a pupal diapause. Hou et al. (2018) mention the presence of adults from April to September in Guangdong and Guangxi, China, while in Japan adults are present from early June till October. In general, B. tsuneonis has a similar biology to B. minax but adults of B. tsuneonis can be found over a longer time in the field.

Fruit fly larvae in general have a typical shape, i.e., cylindrical maggot-shape, elongate, anterior end narrowed and somewhat recurved ventrally, with anterior mouth hooks, and flattened caudal end. Their length varies from 5 to 15 mm. Identification to species level is not possible based on larvae. A key for the 3rd-instar larvae is available in White & Elson- Harris (1992) and is useful for an identification to the genus level. The larva of B. tsuneonis is described in some detail by Carroll et al. (2014).

Abdomen. Elongate oval (not as petiolate in Bactrocera minax); terga free; pecten present on tergum III. Tergum I and sterna I and II wider than long. Terga I and II vary from red-brown to fulvous; terga III-V red-brown to fulvous with a dark black ‘T’ pattern consisting of a narrow transverse dark fuscous to black band across anterior margin of tergum III and a narrow medial longitudinal band over all three terga (in some specimens the anterolateral corners of tergum IV are fuscous to dark fuscous); a pair of oval red-brown shining spots on tergum V. Posterior lobe of surstylus short, sternum V with a slight concavity on posterior margin. Abdominal sterna pale.

Female
As for male except pecten of cilia on abdominal tergum III absent; ovipositor basal segment red-brown and strongly bulbous and rounded basally and narrowing to a cylinder apically, ratio of length of oviscape to length of tergum V, 1.8:1; apex of piercer trilobed.

Bactrocera tsuneonis is morphologically similar to B. minax but anterior supra-alar setae are present. It has a complete lateral yellow band joining postpronotal lobe and the notopleuron and the female has a short ovipositor with a trilobed apex. Full details of the separation of these species were given by Drew & Romig (2013). Hancock & Drew (2019) provide an identification key for all representatives of the subgenus Tetradacus.

In BOLD, B. tsuneonis only forms monospecific Barcoding Index Number Systems (BINs) including representatives from the geographical distribution of this species. For this reason, DNA barcoding might be considered as a suitable tool for the molecular identification of this species. Sequences are available in the Barcode of Life Data Systems (BOLD).

Transport of infested fruits is the main mean of movement and dispersal to previously uninfested areas. Adult flight can also result in dispersal but previous citations of long (50-100 km) dispersal movements for Bactrocera spp. are unsubstantiated according to a recent review by Hicks et al. (2019). Dispersal up to 2 km is considered more typical.

Bactrocera tsuneonis is stenophagous, only attacking citrus fruits. It is a serious pest of citrus in parts of China (Zhang, 1989) and Japan.

Management for this species includes the general control measures for Bactrocera spp. (see Vargas et al., 2015 for an overview of management options).  These include sanitation (to gather all fallen and infested host fruits and destroy them). Insecticidal protection is possible by using a cover spray or a bait spray. Bait sprays work on the principle that both male and female tephritids are strongly attracted to a protein source from which ammonia emanates. Bait sprays have the advantage over cover sprays in that they can be applied as a spot treatment so that the flies are attracted to the insecticide and there is minimal impact on natural enemies and other beneficials.

Citrus species are important crops in the EPPO region. B. tsuneonis is a known pest of Citrus in the area where it is present. It can be moved in trade with infested fruit. Although no detailed study was made on climatic suitability of the EPPO region for this species, B. tsuneonis is known to occur in areas with similar climate. Transient populations could also have negative impacts on export of host fruit from the EPPO region. The EFSA Panel on Plant Health, in their Pest Categorization of non-EU Tephritidae (EFSA, 2020) placed B. tsuneonis on the list of fruit flies that satisfy the criteria to be regarded as a potential Union quarantine pest.

Consignments of fruits of Citrus and Fortunella from countries where B. tsuneonis occurs should be inspected for symptoms of infestation and fruit suspected to be infested should be cut open in order to look for larvae. Possible measures include that such fruits should come from an area where B. tsuneonis does not occur, or from a place of production found free from the pest by regular inspections in the 3 months before harvest. Fruits may also be treated, but specific treatment schedules have mostly not been developed for the Asiatic citrus fruit flies, since citrus has not been much exported from the countries where they occur. However, such trade has recently developed from China to the EPPO region. It is unknown whether schedules for cold treatment developed for other species such as Ceratitis capitata on citrus will be adequate.

Plants of host species transported with roots from countries where B. tsuneonis occurs should be free from soil, or the soil should be treated against puparia. The plants should not be bearing fruits. Citrus plants are in any case prohibited from importation in many countries because of other quarantine pests.

This datasheet was extensively revised in 2020 by Dr M. de Meyer. His valuable contribution is gratefully acknowledged.

This datasheet was first published in 1992 in 'Quarantine Pests for Europe' as Bactrocera spp. (non-European), then as 'Bactrocera tsuneonis' in the second edition of the book in 1997, and revised in 2020. It is now maintained in an electronic format in the EPPO Global Database. The sections on 'Identity', ‘Hosts’, and 'Geographical distribution' are automatically updated from the database. For other sections, the date of last revision is indicated on the right.