Several pathotypes exist in Synchytrium endobioticum. In the past some countries have not followed the usual system of numerical coding of pathotypes. Therefore, a standardized coding system was developed by Baayen et al. (2006).

Potato is the only cultivated host, but wild Solanum spp. are also infected in Mexico. A number of solanaceous plants, including tomatoes, can be artificially inoculated. Potatoes are the host of concern throughout the EPPO region.

S. endobioticum originates in the Andean zone of South America, from where it was introduced into Europe in the 1880s. It spread widely in Europe, but statutory measures have restricted its distribution to other parts of the world. 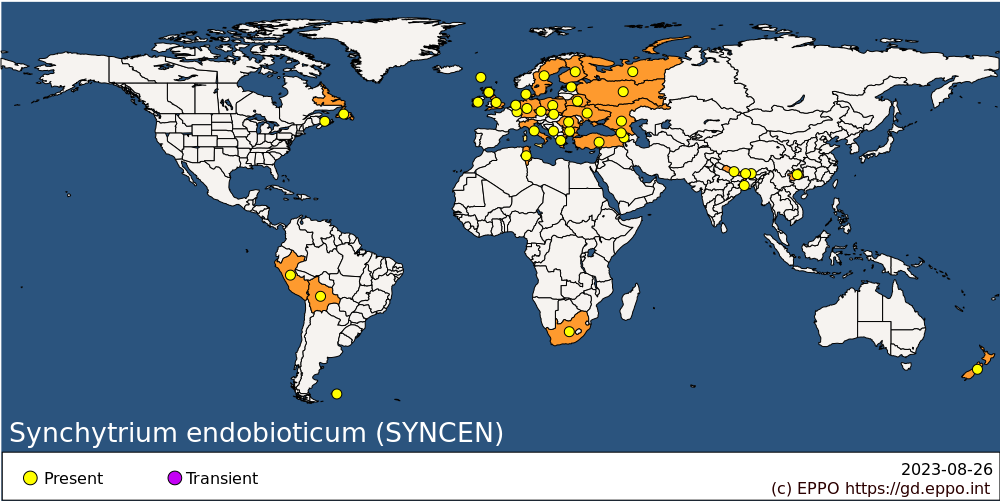 S. endobioticum is an obligate parasite which does not produce hyphae, but produces sporangia containing 200-300 motile zoospores. In the spring, at temperatures above 8°C and given sufficient moisture, the winter sporangia (also called resting spores), in decaying warts in the soil germinate and release uninucleate zoospores. The zoospores possess a single flagellum enabling them to move in soil water and reach the living host. The flagellum is then lost, and the zoospore penetrates the host cell. This becomes greatly enlarged and the enclosed fungus forms a short-lived, quickly reproducing stage, the summer sporangium, from which numerous zoospores are rapidly discharged to reinfect surrounding cells, which again produce summer sporangia (Langerfeld, 1984a).

This cycle may be repeated as long as infection conditions are suitable, so that the host tissue is extensively invaded. The cells around the penetrated cells also swell, and the tissue proliferates, producing a characteristic cauliflower-like appearance.

Under certain conditions of stress, such as water shortage, the zoospores may fuse together in pairs to form a zygote; the host cell in which it forms does not swell but divides. The host cell wall remains closely attached, forming an outer layer to the resistant, thick-walled resting spore. This matures and is released into the soil from rotting warts. Resting spores can remain viable for at least 30 years and can be found in the soil at depths of up to 50 cm (Laidlaw, 1985). The disease can be spread in infected seed tubers which may have incipient warts that pass undetected, or in infested soil attached to tubers. The resting spores resist digestion by animals and can thus be spread in faeces.

Many pathotypes of the fungus exist, defined by their virulence on differential potato cultivars (Stachewicz, 1989). An overview of the worldwide distribution of pathotypes was given by Baayen et al. (2006). Pathotype 1(D1) is the most common in the EPPO region and, in addition, the only pathotype occurring in most countries. Other pathotypes, now numbered up to 39(P1) (Przetakiewicz, 2015) occur mainly in the rainy mountainous areas of Central and Eastern Europe (Alps, Carpathians), for example in the Czech Republic and Germany (Langerfeld, 1984b), but a new pathotype, coded 38(Nevsehir), has also been found in Turkey (Çakir et al., 2009).

These are not usually apparent, although there may be a reduction in plant vigour. Small greenish warts may form in the position of the aerial buds at the stem bases (van de Vossenberg et al., 2019). Leaves may also be infected.

The fungus affects the tuber initials and tubers, but not the roots. Early infection of young developing tubers results in them becoming so distorted and spongy as to be scarcely recognizable (Langerfeld, 1984a). In older tubers, only the eyes are infected; they develop into characteristic, warty, cauliflower-like protuberances; these are initially whitish or green if exposed to light, but gradually darken and eventually rot and disintegrate. The whole tuber may be entirely replaced by the warty proliferation. Similar warts occur on stolons. Warts which develop in a potato store, i.e. in the dark, may be the same colour as the tuber's skin.

In the field, symptoms of the disease are easily observed during harvest of the potato crop, when infected eyes of the tubers show the characteristic, warty, cauliflower-like protuberances (EPPO, 2007). This is the case with susceptible cultivars; however, inconspicuous warts may be present in cultivars with a certain degree of resistance, and thus potentially be overlooked during visual inspection (EFSA, 2019).

For detection of resting spores in soil a number of methods are described (EPPO, 2017a). The method of Pratt (1976a) is based on wet-sieving of soil using a stack of sieves. A disadvantage of the method is the use of the noxious chemical chloroform to extract the spores from soil. In a similar wet-sieving method described by van Leeuwen et al. (2005), calcium chloride is used instead. A fully automated machine for extraction of resting spores from soil, called Hendricks centrifuge, is described by Wander et al. (2007). Molecular methods to detect the organism in plant tissue and soil have been developed and validated (van Gent-Pelzer et al., 2010; Smith et al., 2014; EPPO, 2017a).

S. endobioticum has a very limited capacity for natural spread (i.e. passive dispersal by water/wind; Hampson, 1996), which is principally why it has been possible to control it so effectively by statutory means. It may be carried in international trade in infected potato tubers. Indeed, infected tubers were intercepted 16 times over the periodin the EU. The organism can also be carried in soil, alone or accompanying plants (including non-host plants) or used equipment, vehicles, and machinery, from land on which potato wart has occurred in the past (EFSA, 2018). In particular, S. endobioticum can spread via discarded potatoes, soil and water from the potato processing industries (EFSA, 2018; 2019).

Wart disease is so important that, for almost 100 years, quarantine and domestic legislation has been in force world-wide to prevent its spread. Numerous EPPO publications were devoted to it in the 1950s and 1960s, and in recent decades discussions and publications showed a distinct upsurge (van Leeuwen et al., 2016; van de Vossenberg, 2019). At the start of the present century some innovating publications appeared (e.g. Baayen et al., 2005 proposing the use of field-resistant cultivars in areas affected by the disease), and several international meetings were organized/convened (e.g. EPPO, 2005). In the same period a sudden rise in the number of European countries affected by the disease was observed (Çakir et al., 2009; Dimitrova et al., 2011; Vloutoglou et al., 2012). In 2005, in Turkey, a total of 1000 ha in central Anatolia was already affected by the disease, while the disease was only first detected end 2003 in this region (Çakir, 2005).

Once a crop has been found with potato wart, the whole crop may be rendered unmarketable. Moreover, the fungus is so persistent (resting spores in soil) that potatoes cannot be grown again safely in the field for many years, nor can the land be used for any plants intended for export. Actual direct losses are minimal, except where a new pathotype is involved (Çakir et al., 2009). Since the distribution of S. endobioticum is more limited outside Europe, European countries may face indirect losses arising from restrictions on the export of plants from infested areas.

There are no effective plant protection products available for the treatment of tubers. As recommended by EPPO in a national regulatory control system (EPPO, 2017b), all tubers and haulms of potatoes that were growing on an infected plot should be ‘treated’ so as to destroy S. endobioticum (e.g. by steaming the tubers and incinerating plant debris, burying and treating with slaked lime) or processed under safe conditions. In scheduled plots it should be prohibited to grow potatoes or to grow (or place in the soil) any plant for planting. Only officially specified resistant potato cultivars are allowed to be planted in a buffer zone around infested land (e.g. as also required in the EU with Council Directive 69/464/EEC (EU, 1969)). Because of these stringent quarantine and sanitation measures mainly applied domestically, potato wart is now very well contained in the EPPO region.

Wart resistance remains an important element to be considered in potato breeding programmes. Three methods are recommended for testing of wart resistance, these are all laboratory assays: Glynne-Lemmerzahl method, SASA testing method (modified Glynne-Lemmerzahl) and Spieckermann method (EPPO, 2017a; EPPO, 2020).

S. endobioticum is of quarantine significance for all the regional plant protection organizations which have established quarantine lists. The pest is currently present in several EPPO countries. EFSA suggests that climate would be suitable for its establishment wherever potato is grown in the EU (EFSA, 2018). Though present in many countries, it has a very restricted distribution within them, which justifies its quarantine status. S. endobioticum resting spores persist so long in soil that it has not been possible to evaluate any differences in survival potential under differing soil and climatic conditions and in the presence of other plants.

Potatoes should derive from a stock found free from S. endobioticum. EPPO recommends that seed potatoes (except micropropagative material and minitubers) and ware potatoes for import should not be grown in fields where S. endobioticum has occurred and is still present (EPPO, 2017b,d). Possible similar measures could apply for any kind of host plants with roots (including bulbs and tubers) for import.

In practice, this means an extensive system of ‘scheduling’ of wart-infested fields (EPPO, 2017b) which goes back to the wart epidemic in the first decades of the 20th century. An EPPO-recommended method for ‘descheduling’ fields, i.e. determining that the pathogen has disappeared, has been published (EPPO, 2017c). However, S. endobioticum resting spores are extremely long-lived (Pratt, 1976b; Laidlaw, 1985) and there is still debate as to how soon fields can safely be descheduled. Countries in which only pathotype 1(D1) occurs are advised to require that imported potatoes come from areas where the other pathotypes do not occur.

Pratt MA (1976a) A wet-sieving and flotation technique for the detection of resting sporangia of Synchytrium endobioticum in soil. Annals of Applied Biology 82, 21-29.

Pratt MA (1976b) The longevity of resting sporangia of Synchytrium endobioticum in soil. EPPO Bulletin 6, 107-109.

This datasheet was extensively revised in 2020 by Gerard van Leeuwen. His valuable contribution is gratefully acknowledged.

This datasheet was first published in the EPPO Bulletin in 1982 and revised in the two editions of 'Quarantine Pests for Europe' in 1992 and 1997, as well as in 2020. It is now maintained in an electronic format in the EPPO Global Database. The sections on 'Identity', ‘Hosts’, and 'Geographical distribution' are automatically updated from the database. For other sections, the date of last revision is indicated on the right.