S. littoralis is a highly polyphagous species (Prasad, & Bhattacharya, 1975; Brown & Dewhurst, 1975; Holloway, 1989). Host plants belonging to more than 40 families have been reported, including at least 87 species of economic importance (Salama et al., 1970). Among the main crops attacked by S. littoralis are cotton, groundnut, jute, lucerne, maize, rice, soybean, vegetables (aubergine, Brassica spp., Capsicum spp., cucurbitaceous vegetables, Phaseolus spp., potato, sweet potato, Vigna spp. etc.). Other hosts include ornamentals, wild plants and weeds. In most of the EPPO region, outdoor crops are not likely to be attacked, so the principal potential hosts are vegetables and ornamentals under glasshouses. In the south of the EPPO region, cotton, maize, lucerne, soybean, Trifolium and vegetables are hosts for S. littoralis. 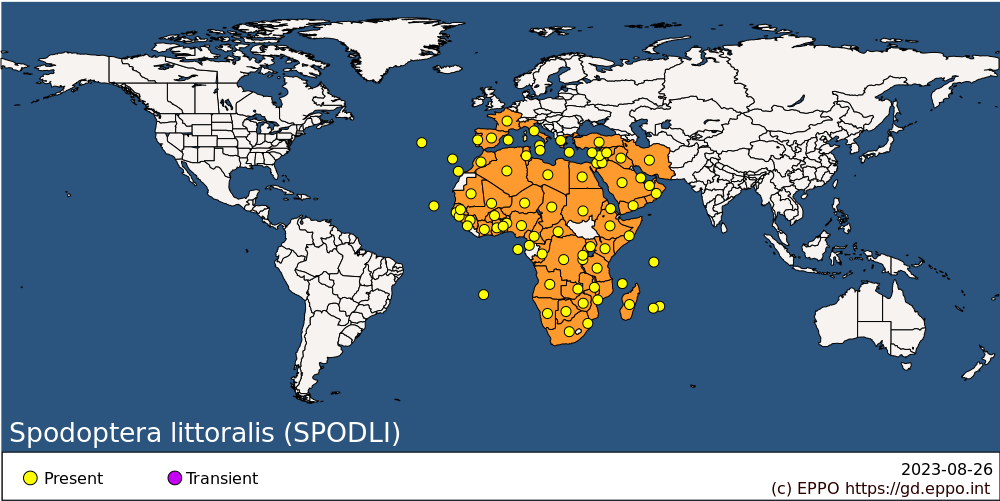 S. littoralis females are ready to mate immediately after emergence. Oviposition starts between 2 and 5 days after emergence, and female lay more than 3000 eggs in egg masses of 20-350 on the lower leaf surface of the host plant (El-Sayes, 1977; El-Malki, 2000).  The masses are covered by hair-like scales from the end of the insect's abdomen.  The oviposition period lasts from 5 to 7 days at 22.5-27.5°C. Newly laid eggs of one strain of S. littoralis were reported to survive exposure to 1°C for 8 days. Partially developed eggs survived longer exposures than newly laid ones under equivalent conditions.

The eggs hatch in about 9 days at 17.5°C and in just 2 days at 32.5°C. The larvae pass through six instars in 15-23 days at 25-26°C. At lower temperatures, for example S. littoralis on glasshouse chrysanthemums in Europe, larvae often go through an extra instar, and maturation may take up to 3 months. The young larvae (first to third instar) feed in groups, leaving the opposite epidermis of the leaf intact. Later, the (4th to 6th instar) larvae disperse and spend the day in the ground under the host plant, feeding at night and early in the morning.

The pupal period is spent in earthen cells in the soil and lasts about 11-13 days at 25°C. Longevity of adults is about 4-10 days, being reduced by high temperature and low humidity. Thus, the life cycle can be completed in about 5 weeks. Up to eight generations have been reported in warm areas and at least 2 in Southern Europe (Vasilaina-Alexopoulou et al., 1970).  No diapause has been reported. Adults live in the field 5-10 days.

The development thresholds and thermal requirements of S. littoralis have been specified by El-Malki (2000) and Yones et al. (2012) and have been used for forecasting phenology in the field and time applied control measures. Dispersal of up to 8 km per generation is possible.

On most crops, damage arises from extensive feeding by larvae, leading to complete stripping of the plants. On cotton, leaves are heavily attacked, and bolls have large holes in them from which yellowish-green to dark-green larval excrement protrudes. On maize, the stems are often mined and young grains in the ear may be injured.

Detailed descriptions and illustrations of the different stages are given in the EPPO Diagnostic protocol PM 7/124 (EPPO, 2015).

Spherical, somewhat flattened, (width x height is approximately 0.45 mm x 0.35 mm). Eggs are laid in batches of 20 to over 350 eggs per batch and are usually covered with hair scales from the tip of the abdomen of the female moth. They are usually whitish-yellow and become black close to hatching.

First instar larvae are 1-2.5 mm long and mature larva are 40-45 mm in length; head width up to 2.9 mm; Typically, older larvae have a Y-shape on head/thorax shield; variable in colour (brown to greenish)

In late instars of S. littoralis, small yellow to white dots are present at the base of the black patches on the second and third thoracic segment. Other conspicuous features are the dark patches on the dorsum, most prominently on abdominal segments 1 and 8.

Moth, with grey-brown body, 15-20 mm long; forewings in males 12-16 mm long and 13-16 mm long in females. The forewings are grey to reddish-brown with a strongly variegated pattern and paler lines along the veins; the hindwings are greyish-white with grey margins, without dark veins. There is a reniform spot light brown outlined in white which because of its triangular shape appears to be a titled letter ‘A’;

On dissection of the genitalia, ductus bursae is short (length less than twice the width) and completely sclerotized in female. Male genitalia with juxta quadrate with two ventrolateral projections; ampulla is elongate and curved.

Tests for molecular identification are described in the EPPO Diagnostic protocol PM 7/124 (EPPO, 2015).

Pheromone traps can be used for the detection of adults and are the primary method for detecting Lepidoptera species. All developmental stages can be visually detected on a host plant or commodity apart from pupae since larvae will mostly pupate in the soil. Methods are available for identification of adults or larvae detected on a plant or commodity. Further details for inspection of places of production for Vitis plants for planting are available in EPPO Standard PM 3/85 (EPPO, 2018).

The moths have a flight range of 1.5 km during a period of 4 h overnight, facilitating dispersion and oviposition on different hosts (Salama & Shoukry, 1972). They can accordingly fly quite long distances. However, spread in cooler regions would be limited by the short lifespan of adults (EFSA 2015). In international trade, eggs or larvae may be present on planting material, cut flowers or vegetables. Interceptions in EU suggest that S. littoralis is more commonly found on flowers (Rosa) and fresh herbs (mint, basil). S. littoralis has been trapped outside its normal range in Europe (Hachler, 1986), presumably as a result of entry on imported commodities or as a result of migratory flight from Southern Europe (EFSA, 2015).

S. littoralis is one of the most destructive agricultural lepidopterous pests within its subtropical and tropical range. It can attack numerous economically important crops all year-round. On cotton, the pest may cause considerable damage by feeding on the leaves, fruiting points, flower buds and also on bolls. Defoliation (of 20–70% of the leaf area) on cotton by S. littoralis larvae can result in 50% reduction in yield (Russel et al., 1993). When groundnuts are infested, larvae select primarily the young folded leaves for feeding but, in severe infestations, leaves of any age are stripped off. Sometimes, the ripening kernels in the pods in the soil may be attacked. Pods of cowpeas and the seeds they contain are also often badly damaged. In tomatoes, larvae bore into the fruit which is thus rendered unsuitable for consumption. Numerous other crops are also attacked, mainly on their leaves.

In Europe, damage due to S. littoralis was minimal until about 1937. In 1949, there was a catastrophic larval population explosion in Southern Spain. The main crops affected were lucerne, potatoes and other vegetable crops. At present, this noctuid is of great economic importance in Cyprus, Israel, Malta, Morocco and Spain (but not in the north of Spain, e.g. Cataluña). In Italy, it is especially important on protected crops of ornamentals and vegetables (Inserra & Calabretta, 1985; Nucifora, 1985; Sannino, 2003). In Greece, S. littoralis used to cause slight damage in Crete on lucerne and Trifolium only and it is currently a frequent pest in southern Greece causing damage to lucerne, potatoes and grass lawns. Recently, outdoor damage has been reported in France on several crops such as mint, Begonia, lettuce and chard (Coquempot & Ramel, 2008; Fredon Corse, 2014).

On cotton, an economic threshold of 10 000 egg masses /ha was considered reliable and practical for scheduling pesticide intervention (Hosny et al., 1986). Development of insecticide resistance against various classes of insecticides has been reported for field populations of S. littoralis and it is recommended to base management strategies on rotation of applied insecticides with different modes of action (Issa et al., 1984a; 1984b; Sawicki, 1986; Elghar et al., 2005; Temerak, 2002). An attract and kill methodology based on the sex pheromone of S. littoralis and λ-cyhalothrin was experimentally tested but without success in controlling S. littoralis infestations (Downham et al., 1995).

Spodoptera littoralis is present in the EPPO region in the Mediterranean countries. Being a polyphagous pest, it can be associated with several plant commodities and further introduced and spread in the rest of the EPPO region. However, this pest cannot successfully overwinter in northern areas, therefore, establishment is not expected, outside of greenhouses, beyond of its current distribution range. Dispersal by flight and presence of outbreaks in Northern Europe have been reported in the past and may occasionally occur (EFSA, 2015).

S. littoralis could further be introduced and spread into the EPPO region through international trade. Phytosanitary measures may include cultivation of plants for planting in pest free areas or pest free sites of production and inspection of commodities prior to export.

Examples of measures used for cut flowers include cold storage e.g. for chrysanthemum and carnation cuttings. Cold storage for at least 10 days at a temperature not exceeding 1.7°C kills all stages of S. littoralis, but may damage the plants. Storage at slightly higher temperatures or shorter durations does not eradicate S. littoralis, but differences in response to cold have been observed both between strains and within developmental stages of the pest (Powell & Gostick, 1971; Miller, 1976). Irradiation has been investigated as a treatment for cut flowers (Navon et al., 1988).

Baker CRB & Miller GW (1974) Some effects of temperature and larval food on the development of Spodoptera littoralis. Bulletin of Entomological Research 63, 495-511.

Miller GW (1976) Cold storage as a quarantine treatment to prevent the introduction of Spodoptera littoralis into glasshouses in the UK. Plant Pathology 25, 193-196.

Navon A, Yatom S, Padova R & Ross I (1988) [Gamma irradiation of Spodoptera littoralis eggs and neonate larvae to eliminate the pest on flowers for export]. Hassadeh 68, 722-724.

Nucifora A (1985) [Successive cultivation and systems of integrated control in protected crops of the Mediterranean area]. Tecnica Agricola 37, 223-241 (in Italian).

Resquín-Romero G, Garrido-Jurado I &Quesada-Moraga E (2016) Combined use of entomopathogenic fungi and their extracts for the control of Spodoptera littoralis (Boisduval) (Lepidoptera: Noctuidae). Biological Control 92, 101–110.

This datasheet was extensively revised in 2020 by Panagiotis Milonas (Benaki Phytopathological Institute). His valuable contribution is gratefully acknowledged.

This datasheet was first published in the EPPO Bulletin in 1981 and revised in the two editions of 'Quarantine Pests for Europe' in 1992 and 1997, as well as in 2020. It is now maintained in an electronic format in the EPPO Global Database. The sections on 'Identity', ‘Hosts’, and 'Geographical distribution' are automatically updated from the database. For other sections, the date of last revision is indicated on the right.