Triadica sebifera is native to China and Japan with a non-native distribution showing invasive behaviour in the USA and Australia. In the southern USA, T. sebifera is a major invasive species. Although it was first introduced in the late 18th century, it did not become invasive until the 20th century. This invasion pattern may be due to greater propagule pressure brought about by large-scale commercial planting and hurricanes. Invasions convert grasslands to woody thickets, displace native species and disrupt ecological processes. DeWalt et al. (2011) stated that ‘Present populations near the sites of the earliest introductions of Chinese tallow tree to the southeastern USA (Charleston, South Carolina and Savannah, Georgia) appear to differ in genetic composition as well as genetic diversity from populations resulting from introductions made approximately 120 years later to the rest of the southeastern USA.’

T. sebifera is becoming an invasive environmental weed of water courses and native vegetation areas in Australia (NSW Government, Australia, 2017). It was originally introduced to as an ornamental tree and has been planted in streets and garden in southeast Queensland and Northern New South Wales (NSW). Naturalised populations occur in various locations throughout south-east Queensland. The largest infestation exists near Casino, NSW. Smaller infestations are evident throughout the North Coast, Central Coast and New England regions of NSW and localized plants exist in Victoria (NSW Government, Australia, 2017). DeWalt et al. (2011) details that it is unknown when T. sebifera was introduced to Australia, however, its genetic similarity to the rest of the South-eastern USA indicates that it may have been introduced in the early 1900s at the same time it was being extensively planted in areas along the USA coast of the Gulf of Mexico or that it represents a secondary invasion from the South-eastern USA.

In the EPPO region, the species is absent from the natural environment but there has been historic planting of the species in gardens and botanical gardens. 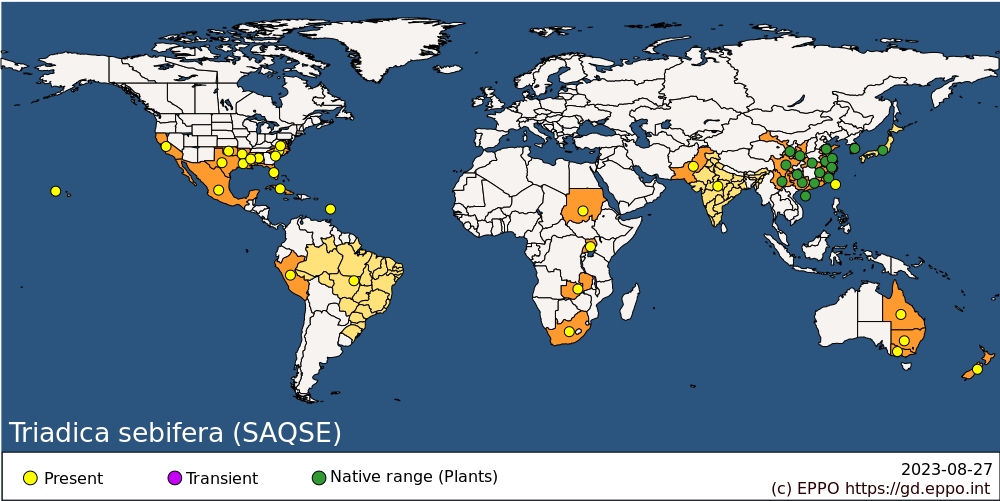 In the southern forests of the USA, approximately 80% of tallow invasions occur at elevations lower than 50 m or slopes of <2°. At higher elevations, and with steeper slopes, the likelihood of invasion drops dramatically and ‘no invasion was reported in the FIA [Forest Inventory Analysis] data for sites where elevation was >165 m or slopes were steeper than 18°’ (Gan et al., 2009). In Taiwan, T. sebifera plantations occur at elevations of 400–700 m (Lin et al., 1958). Surveys of T. sebifera in the Indian Himalayas recorded trees at an elevational limit of 1600 m (Jaryan et al., 2013).

Evidence from plantations and the native and naturalized range of T. sebifera indicates that it is compatible with a wide range of soil types: clays, loams and sands (Radford et al., 1968; Scheld & Cowles, 1981; Bruce et al., 1995).  In Taiwan, Lin et al. (1958) determined the chemical properties of soils on the ‘18 main habitats of T. sebifera tree’. Total nitrogen was 0–0.20% and pH was 2.9–8.5. Gan et al. (2009) found that in sites throughout the south-eastern USA the probability of invasion was greater closer to water bodies, probably due in part to soil moisture levels that were favourable for establishment. Bruce (1993) showed that T. sebifera exhibited significantly lower seedling survival in treatments with 23% soil moisture compared with treatments with ≥31% soil moisture (Bruce, 1993; Meyer, 2011).

Jones & McLeod (1989) found a positive relationship between light availability and biomass production where the greatest production was achieved under 100% light. In greenhouse experiments, seedling shoot and total biomass were significantly lower in ambient light than under an 87% shade cloth. In the field, seedlings perform much better in open than in shaded habitats.

There are no known natural enemies in the EPPO region.

T. sebifera is a highly valued species for both its ornamental qualities and productive capability in agricultural and industrial sectors. Tallow wood is white and close-grained, suitable for carvings, furniture, carts and match making as well as incense (Lin et al., 1958; USDA, 2000). The leaves are used to make a black dye and manure (Lin et al., 1958; USDA, 2000).

T. sebifera tree seeds are a source of vegetable tallow, a quick-drying oil and protein food. The outer covering of the seeds contains solid fat known as Chinese vegetable tallow and the kernels produce a drying oil called stillingia oil. Candles, soap, cloth dressing and fuel are made from the tallow. The oil is used in machine oils, as a crude lamp oil and in making varnishes and paints (because of its quick-drying properties). The presscake remaining after extraction of tallow and oil can be processed to make a valuable animal feed and human food, rich in protein. Different parts of the plants are used in traditional Chinese medicine (USDA 2000, Gao et al., 2016).

In the early 20th century, the Foreign Plant Introduction Division of the US Department of Agriculture promoted the planting of tallow trees in the Gulf Coast and Southern US States to establish a local soap industry (USDA, 2000; DeWalt et al., 2011). When cultivated under conventional agricultural methods, T. sebifera can be grown over extensive areas of land and can provide woody biomass for direct burning or conversion to charcoal, ethanol and methanol (Scheld & Cowles, 1981; USDA, 2000). Wen et al., (2010) demonstrated that T. sebifera seed oil can be converted to biodiesel. Due to its ability to resprout, its rapid growth rate and its tolerance to flooding, drought and salt, T. sebifera has been considered as a biomass crop for the Gulf Coast region of the USA (Scheld & Cowles, 1981; USDA, 2000).

Birds, both wild and domestic, will feed on the seeds and it is sometime recommended as a bird food (USDA, 2000, Renne et al., 2002). The flowers of T. sebifera are visited by honeybees, contributing to a commercially desirable, light-coloured honey (USDA, 2000; Renne et al., 2002). T. sebifera is recognized as an important species for commercial honey production in Louisiana (Lieux, 1975).

Within the EPPO region, apart from the species in trade, there are no current socio-economic benefits for the species. Currently, there is little information available on the value of the species in horticulture. The species is listed as available from two suppliers in the UK (https://www.rhs.org.uk/ Plants/Nurseries-Search-Result?query=239677).

In the USA, T. sebifera displaces native plant species and establishes dominant stands, and can transform areas of prairie and grassland to woody thickets within 10 years (Cameron & Spencer, 1989; Bruce et al., 1995, 1997; Siemann & Rogers, 2003). T. sebifera has been shown to invade south-east coastal prairie that is the sole habitat of the federally endangered Attwater’s prairie chicken (Tympanuchus cupido attwateri), the exclusive wintering ground of the federally endangered whooping crane (Grus americana) and important habitat for several other critically imperilled grassland birds. In addition, one federally endangered and 12 critically imperilled (category 11) plant species occur in the remaining fragments of this once vast ecosystem.

T. sebifera can decrease water quality. The species can also displace native species, reducing genetic resources. When leaf material becomes incorporated into the water body, this has been shown to be toxic to amphibians (Cotton et al., 2012). Leonard (2008) showed that the leaf litter can have negative impacts on the native habitat: (1) leaf litter has a direct effect on water quality; (2) T. sebifera can cause differential survival and performance of tadpoles; (3) differences in water quality due to leaf litter can cause changes in tadpole behaviour; and (4) T. sebifera leaf litter breaks down much faster than litter from native trees and this influences the composition of the aquatic community.

T. sebifera supports a lower diversity of arthropods than co-occurring native trees in Texas (Hartley et al., 2010) and the native prairies it displaces (Cameron & Spencer, 1989; Hartley et al., 2004). T. sebifera seedlings can establish at such high densities that fine fuels are lacking even in a stand of smaller trees. These changes in fuel characteristics result in patchier and/or less severe fires, with a negative impact on native species (Meyer, 2011).

In invasive contexts, T. sebifera can alter nutrient cycling and species composition among decomposers (Cameron & Spencer, 1989; Zou et al., 2006). Siemann & Rogers (2003) demonstrated that the competitive advantage displayed by T. sebifera in the Southern USA may be due to the species being released from specialist herbivores. After comparing populations from the invasive range in Texas with populations from the native range in China, Rogers & Siemann (2005) concluded that ‘invasive Sapium ecotypes have a greater capacity to compensate for herbivory damage than native Sapium ecotypes’.

Most sources describe T. sebifera infestations as nearly impossible to eliminate. Mechanical control of T. sebifera in Florida has either failed or exacerbated the infestation. Previous attempts at control have been through application of prescribed burns and mechanical removal of trees and seedlings, but there has been limited success due to the density of growth and the likelihood of disturbing non-target vegetation and soil. If the roots are not completely removed, the tree will regenerate. However, most sources agree that control should take place over a 3–5 year period. Proven, reliable, biological control agents are not currently available. In North America, applications of basal bark herbicide are commonly used for control.

In 2016, T. sebifera was identified as a priority for risk assessment within the requirements of Regulation 1143/2014 (Branquart et al., 2016; Tanner et al., 2017). A subsequent pest risk analysis concluded that T. sebifera posed a high phytosanitary risk to the endangered area (EPPO, 2018) and was added to the EPPO A1 List of pests recommended for regulation. In 2019, T. sebifera was included on the (EU) list of Union concern (EU Regulation 1143/2014).

This datasheet is an output of a DG Environment, LIFE funding, under the project LIFE15 PRE-FR 001: Mitigating the threat of invasive alien plants in the EU through pest risk analysis to support the EU Regulation 1143/2014.

The datasheet was produced following an Expert Working Group (EWG) that risk analysed T. sebifera for the EPPO region in October 2017. The composition of the EWG was as follows: G. Brundu (University of Sassari, Department of Agriculture, IT), D. Chapman (Centre for Ecology and Hydrology, GB), L. Flory (University of Florida, US), J. Le Roux (Stellenbosch University, ZA), O. Pescott (Centre for Ecology and Hydrology, GB), E. Siemann (Rice University, US), U. Starfinger (Institute for National and International Plant Health, DE) and R. Tanner (EPPO).

This datasheet was first published in the EPPO Bulletin in 2019 and is now maintained in an electronic format in the EPPO Global Database. The sections on 'Identity' and 'Geographical distribution' are automatically updated from the database. For other sections, the date of last revision is indicated on the right.