Rhagoletis indifferens and R. cingulata (Loew) are very closely related allopatric species, occurring respectively in the western and eastern parts of North America. Before 1966, only R. cingulata was generally recognized, and most pre-1966 literature did not make any distinction between the two species, even though distinct morphological differences between flies from the east and west were recognized in 1955 (Blanc & Kiefer, 1955). As a result, all records of R. cingulata in western North America refer to R. indifferens.

Rhagoletis indifferens is found in western North America, from California in the United States north to British Columbia, Canada (Bush, 1966; Yee et al., 2014a). According to Foote et al. (1993), R. indifferens is found in nine states in the United States: California, Colorado, Idaho, Montana, New Mexico, Oregon, Utah, Washington, and Wyoming. In the Pacific Northwest states of Washington and Oregon where the sweet cherry industry in the United States is concentrated, the fly is found almost exclusively in bitter cherry or in unmanaged sweet and tart cherry trees in yards and roadsides, and not in commercial orchards, which if properly managed are usually free of the fly (Smith 2005). Previous records of R. indifferens in the EPPO region were based on misidentifications of R. cingulata (Augustinos et al., 2019). 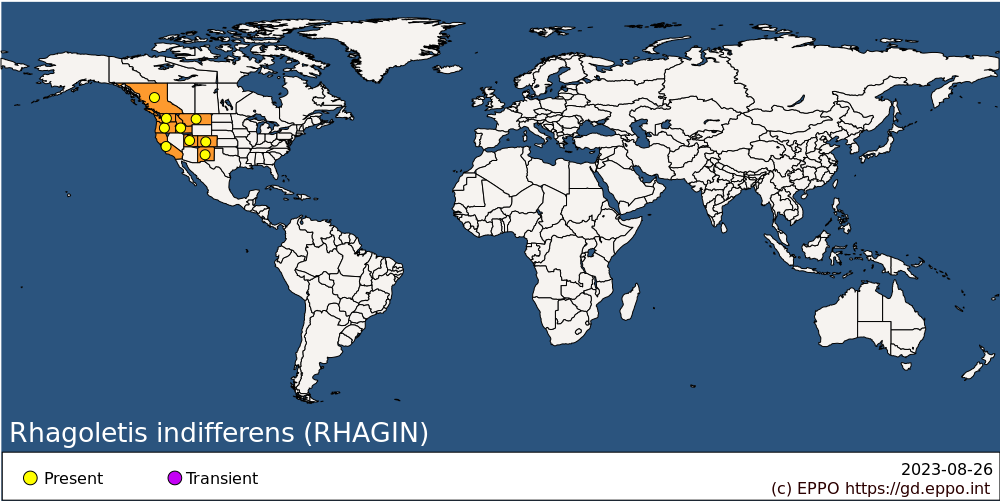 Eggs are laid below the skin of the host fruit and, in cherries, hatch after 5-8 days (Frick et al., 1954). Larvae feed exclusively inside fruit. The first instar stage lasts 2-5 days; the second instar averages 4 days; the third instar averages 8 days. Pupariation is in the soil under the host plant, where puparia overwinter. A prolonged chilling period is required to terminate diapause and for pupae to develop into adults. Adults eclose from puparia in soil in late spring or summer. Flies feed indiscriminately on leaf and fruit surfaces, ingesting leachates that may contain sugars, bacteria, yeasts, amino acids, and minerals. Males use fruit as territories for mating (there is no true courtship) and defend them against other males. Females reach reproductive maturity and begin ovipositing about 1 week post-eclosion. Adult R. indifferens may live 15-30 days under field conditions in central Washington (Frick et al., 1954).

Attacked cherries have punctures caused by stinging by the females’ ovipositor. In advanced stages of larval infestation, cherries become discolored and soft. Larval respiration holes and exit holes are commonly seen when larvae are at the third instar stage or have left fruit, respectively.

Separation of R. indifferens and R. cingulata larvae and adults (Blanc and Kiefer 1955, Bush, 1966) is difficult morphologically and should be referred to a specialist.

The egg is white and elongated.

Thorax: Scutum predominantly black, with four longitudinal bars of tomentum that form grey stripes; scutum with dorsocentral setae based close to a line between the anterior supra-alar setae; scutum with dorsocentral setae and presutural supra-alar setae; anatergite without long pale hairs, at most with a fine pubescence; scutellum flat and with four marginal setae (one basal and an apical pair), black at base and sides, with basal and lateral black areas broadly joined; basal scutellar setae based well within black area.

Black shading on the posterior surface of coxa I separates R. indifferens from R. cingulata adults and all other members of the cingulata species group (Bush, 1966).

Wing: Vein Sc abruptly bent forward at nearly 90°, weakened beyond this bend and ending at subcostal break; vein R1 with dorsal setulae; vein R4+5 usually without dorsal setulae, except sometimes at the base of the vein (except in some aberrant individuals); apex of vein M meeting C with a distinct angle; cup extension short, never more than one-fifth as long as vein A1+Cu2, and vein CuA2 straight along anterior edge of cup extension; cell cup always considerably broader than half depth of cell bm, and usually about as deep as cell bm; cells r1 and r2+3 without any markings between the discal and preapical crossbands; apical crossband usually only divided at apex, leaving an oblique hyaline stripe across the apex of cell r4+5; apical cross band adjoining vein C. Length 3-4 mm.

Abdomen: Predominantly black; female with an ovipositor (aculeus) about 0.83 mm long (Bush, 1966) that is shorter than the wing length, and straight.

Traps already in use within the EPPO region for the European cherry fruit fly R. cerasi should be suitable for monitoring any invasion of R. indifferens. These traps capture both sexes and are based on visual, or visual plus odour, attraction. They are coated with sticky material. Traps are usually either flat-surfaced and coloured various shades of yellow (panels) to elicit a supernormal foliage response, or spherical and dark-coloured to represent a fruit. The odour comes from protein hydrolysate or other substances emitting ammonia, such as ammonium acetate or carbonate. Burditt (1988) evaluated different traps for R. indifferens in British Columbia, Canada, and Yee (2013, 2014b, 2016, 2017b, 2018b, 2019) has evaluated traps against R. indifferens in Washington State in the USA.

Adult flight and the transport of infested fruits are probably the major means of movement and dispersal of R. indifferens to previously non-infested areas. However, in general, R. indifferens is not known to fly long distances. In mark-release-recapture studies in Washington State, R. indifferens dispersed 67 m to 171 m (Frick et al., 1954; Jones & Wallace, 1955). In British Columbia, 96% of released R. indifferens were captured within 100 m of their release point (Senger, 2007). In international trade, the major means of dispersal to previously non-infested areas is presumably the transport of fruits containing live larvae. There may also be a risk from the transport of puparia in soil or packaging with plants that have borne fruit. R. cingulata, another cherry fruit fly originating in the Eastern USA, has been introduced and spread into Europe in the 2000s (EFSA PLH Panel, 2014).

Rhagoletis indifferens is an important quarantine pest of cherries in western North America. Quarantine agreements between the Pacific Northwest states and other US states or countries result in a zero tolerance for cherry fruit fly larvae in packed fruit, leading to rejection of an entire load when a larva is found. The fly is mostly found in unmanaged sweet and sour cherry trees and not in commercial orchards where pest management is applied (Smith, 2005; Yee et al., 2014a).

Control procedures already established in the EPPO region for R. cerasi and R. cingulata are similar to those used against R. indifferens and could therefore be implemented against any introduction of this species within the EPPO region. If possible, wild and abandoned host plants near commercial cherry orchards should also be removed. Organophosphates, such as malathion and dimethoate, have long been known to be highly effective, killing eggs, larvae and/or adults of R. indifferens (Zwick et al., 1970; 1975). Spinosad in baits and other insecticides have been identified that are highly toxic to R. indifferens (e.g., Yee, 2009; 2010; 2015b; 2020a; Yee & Alston, 2006; 2012) and have been successful in managing the fly (Yee & Alston, 2006). Biological control agents against R. indifferens have also been studied in the laboratory, focusing on nematodes and fungi (Yee, 2003; 2005b; 2020b; Cossentine et al., 2011). These agents have shown promise although their efficacies have yet to be demonstrated in the field.

To reduce the probability of pest presence in traded fruits, in the Pacific Northwest of the USA, cherries are checked for larvae at the packinghouses before fruit are shipped using the brown sugar flotation method, which has been shown to be highly efficacious in detecting larvae (Yee, 2012; 2014c).

R. indifferens is a damaging fruit fly in North America and Prunus species are important crops in the EPPO region. Considering the pest current range in North America, it is likely that this species could establish in part of the EPPO region. Although control measures already applied against other fruit flies in cherry production may limit its impact, it may be needed to adapt IPM procedures to cover a longer period of infestation.

Consignments of cherries (Prunus avium, P. cerasus) from regions where R. indifferens occurs should be inspected for symptoms of infestation and those suspected should be cut open in order to look for larvae. Fruits should come from areas where R. indifferens does not occur, or from a place of production found free from the pest by regular trapping before harvest in addition to use of the brown sugar flotation method post-harvest at the packinghouse. Cherries may also be treated effectively using methyl bromide to kill eggs and larvae (Jones & Schuh, 1953; USDA, 2021), but this may reduce cherry shelf life. Irradiation (Burditt & Hungate, 1988) and combined heat and controlled atmosphere treatments (Neven & Rehfield-Ray, 2006) are also effective at controlling R. indifferens in cherries. Similar measures may be considered for fruit of other host plants, but those species either produce fruits that are not widely traded (e.g. P. cerasifera, P. salicina) or are rarely attacked.

Plants of host plant species transported with roots from regions where R. indifferens occurs should be free from soil. Such plants (see host list) may be prohibited from importation.

Bush GL (1966) The taxonomy, cytology and evolution of the genus Rhagoletis in North America (Diptera: Tephritidae). Bulletin of the Museum of Comparative Zoology 134, 431–526.

Phillips VT (1946) The biology and identification of trypetid larvae. Memoirs of the American Entomological Society 12, 1–161.

Yee WL, Goughnour RB (2005a) New hosts of western cherry fruit fly, Rhagoletis indifferens (Diptera: Tephritidae), and their relationship to life history characteristics of this fly. Annals of the Entomological Society of America 98, 703–710.

Yee WL (2015b) Temperature-mediated kill and oviposition of western cherry fruit fly (Diptera: Tephritidae) in the presence of spinosad. Journal of Economic Entomology 109, 132–142.

Yee WL, Goughnour RB (2017a) Development in mango (Mangifera indica) and other tropical and temperate fruit by Rhagoletis pomonella and R. indifferens (Diptera: Tephritidae) in the laboratory. Florida Entomologist 100, 157–161.

Yee WL (2017b) Attraction of Rhagoletis indifferens (Diptera: Tephritidae) to white light in the presence and absence of ammonia. Florida Entomologist 100, 21–28.

This datasheet was first published in the EPPO Bulletin in 1983 and revised in the two editions of 'Quarantine Pests for Europe' in 1992 and 1997, as well as in 2021. It is now maintained in an electronic format in the EPPO Global Database. The sections on 'Identity', ‘Hosts’, and 'Geographical distribution' are automatically updated from the database. For other sections, the date of last revision is indicated on the right.