Puccinia pittieriana was formerly considered the exclusive causal agent of the rust disease in cultivated and wild potatoes; however, a recent study revealed that Puccinia telimutans is the species causing the disease in wild potatoes in Mexico (Otálora & Berndt, 2019).

The primary hosts of Puccinia pittieriana are potatoes and, to a lesser extent, tomatoes, as well as other Solanaceae. The wild potatoes Solanum demissum and S. verrucosum from Mexico were excluded from the host list of P. pittieriana because the causal agent of the disease in these plants is Puccinia telimutans (Otálora & Berndt, 2019). Around 30 rust species infect Solanaceae plants; however, Puccinia pittieriana is the only telial rust known on cultivated tomatoes and potatoes (Laundon & Rainbow, 1971; Otálora & Berndt, 2020).

P. pittieriana is indigenous to Central and South America, where it occurs in mountain valleys, mostly between 2700-3800 m. It was erroneously reported from Bolivia, Brazil, Panama, and Paraguay. Reports from Bolivia and Brazil were based on misidentifications, while records from Panama and Paraguay were based on erroneous citations, which were later invalidated (Otálora & Berndt, 2020; CABI 2021). It has not spread to other continents. 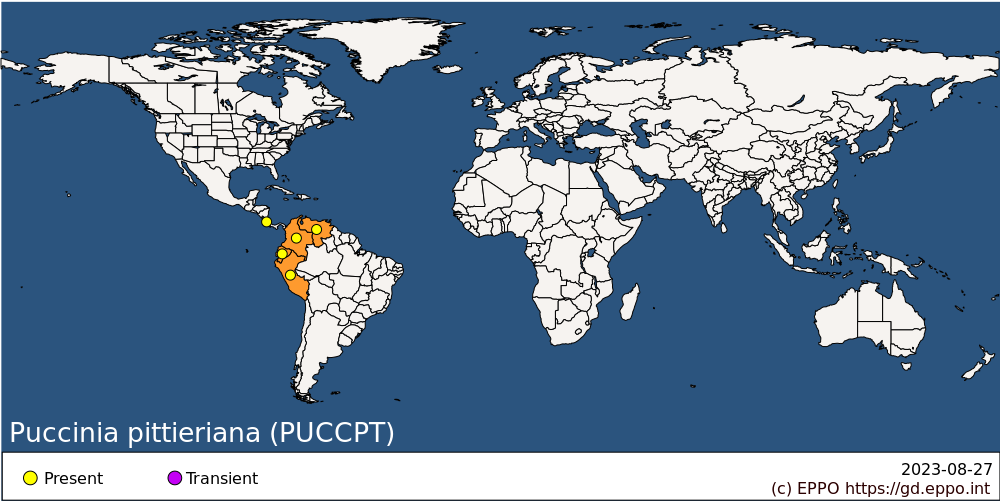 P. pittieriana is a microcyclic rust, producing only teliospores. In vitro, below 15°C, the teliospores germinate to produce basidia and basidiospores in 3-24 h (French, 2001). The basidiospores are carried away by wind to new host leaves, and begin infection immediately. The incubation period is 14-16 days on potatoes at temperatures of 16°C or below, and lesions develop fully in 20-25 days. Teliospores mature 30-40 days after inoculation.

At higher temperatures, basidiospores are not formed, so spread is favoured by cool conditions - average temperature of 10°C with 10-12 h of free moisture. The pathogen persists on overlapping potato crops or on solanaceous weeds. The longevity of teliospores has apparently not been determined, but they might persist in debris in soil, accompanying exported potato tubers.

Initial symptoms are discoloration spots on the leaf upper side. On the leaf underside rusty pustules (aggregation of several telia) protrude 1-5 mm, with a corresponding depression on the upper side. Eventually, pustules develop a whitish powdery surface due to the germination of the teliospores into basidiospores. Although the symptoms appear primarily on the leaves, lesions can also be observed in stems, petioles, and flowers of the potato plants. In highly affected crops there is a complete yellowing of the leaves followed by defoliation (Molina Valero, 1997; French, 2001).

The spore-producing fruiting bodies (telia) develop into aggregates of 2–5 mm in diameter (individual telium 0.2 mm diameter). Teliospores are yellowish-amber to dull brown, mainly two-celled but occasionally one-celled, broadly ellipsoidal with rounded or deformed ends, not or slightly constricted at the septum, 22–38 × 14–29 μm, germinating upon maturity and producing basidiospores. The spore wall is apically thickened up to 7 μm. Pedicels are up to 60 μm long and the hyaline basidiospores are 8–18 × 11–25 μm (French, 2001; Otálora & Berndt, 2020). For further details see Otálora & Berndt (2020).

The pathogen detection is based on symptomatology, the morphological characterization of the fruiting bodies (telia) and the microscopic examination of the teliospores (French, 2001; EFSA, 2017; CABI, 2021). So far only a small number of DNA sequences are available in GenBank (NCBI, 2021) and EPPO-Q-bank (EPPO, 2021).

The Mexican potato rust P. telimutans differs from P. pittieriana in symptoms, host range (not found on cultivated potato) and teliospore morphology. P. telimutans produces two distinct rusty pustules, first subepidermal pruinose-tomentose sori with catenulate hyaline teliospores, and second blackish-brown sori with chestnut-brown pedicellate teliospores (Otálora & Berndt, 2019). Aecidium cantensis is another rust on cultivated potato, but unlike P. pittieriana it is an anamorphic species that develops only aecia instead of telia. It forms larger rust pustules, 5-10 mm across, each composed of many whitish to ebony, cylindrical to bell-shaped aecia of about 0.5 mm in diameter (cluster cups).

The potential for wind-borne distribution is high, as with all rust fungi, but there is a limitation for long-distance dispersal of basidiospores because they are generally shorter-lived than urediniospores (absent from P. pittieriana). Thus, wind-borne spread from South or Central America to other continents seems unlikely. The fungus could be introduced on leaves of living material (e.g. material imported for breeding purposes), or on dead plant material (e.g. scientific specimens), or on crop residues or soil accompanying tubers.

P. pittieriana was only of significant economic importance in Colombia and Ecuador until the 1970s. Later it has only been reported as a limiting factor for potato production in Northern Ecuador (Ambato region). In Colombia and Peru, it is a disease of minor importance with no reports of losses (EFSA, 2017; Chalkley, 2021; CABI, 2021). There is no recent information suggesting that P. pittieriana causes significant damage to tomatoes.

Chemical control is possible through the use of fungicides (e.g. carbamate) which can be applied at 14-day intervals (Diaz & Echeverria, 1963). To reduce inoculum, phytosanitary methods including destruction or removal of crop debris and control of associated weeds are recommended. There are no records on the biological control of the fungus.

In the EPPO region, P. pittieriana could certainly find conditions suitable for epidemic development, especially in northern countries. It is less certain how or whether it could overwinter (as teliospores on debris, on solanaceous weeds). In view of the great importance of the potato crop to the EPPO region, the risk from P. pittieriana was considered great enough to justify inclusion in the EPPO A1 List of pests recommended for regulation as a quarantine pest.

P. pittieriana belongs to the group of South American pests of potato which justify strict post-entry quarantine procedures in the EPPO region, together with equivalent checks before export. Only material for scientific purposes should normally be imported from countries where the pathogen is present. For all other potato material from countries where P. pittieriana occurs, importation should be prohibited.

This datasheet was extensively revised in 2022 by Mónica A.G. Otálora, Institute of Integrative Biology, ETH Zurich, Switzerland. Her valuable contribution is gratefully acknowledged.

This datasheet was first published in the EPPO Bulletin in 1988, revised in the two editions of 'Quarantine Pests for Europe' in 1992 and 1997, as well as in 202X. It is now maintained in an electronic format in the EPPO Global Database. The sections on 'Identity', ‘Hosts’, and 'Geographical distribution' are automatically updated from the database. For other sections, the date of last revision is indicated on the right.