The X-disease agent ‘Candidatus Phytoplasma pruni’ is widespread in North America and has not been reported elsewhere in the world (Uyemoto & Kirkpatrick, 2011). X-disease was first described in 1931 on sweet cherry in California as cherry buckskin. Shortly thereafter, epidemiological and graft-transmission studies showed that the causal agent of cherry buckskin also caused a lethal decline disease of peach, called leaf casting yellows. In 1933, a disorder of peach characterized by symptoms similar to those reported in California, was observed in Connecticut and called X-disease because of its unknown cause. In ensuing years, peach X-disease was reported throughout the United States and in Canada (Kirkpatrick et al., 1995; Uyemoto & Kirkpatrick, 2011; Marcone et al., 2014). Peach rosette, peach red suture, and peach yellows, which are all caused by the X-disease phytoplasma, occur in the Eastern United States and Canada (Uyemoto & Scott, 1992; Kirkpatrick, 1995a, b; Larsen & Waterworth, 1995; Scott & Zimmerman, 2001; Kirkpatrick et al., 2011; Ragozzino, 2011). 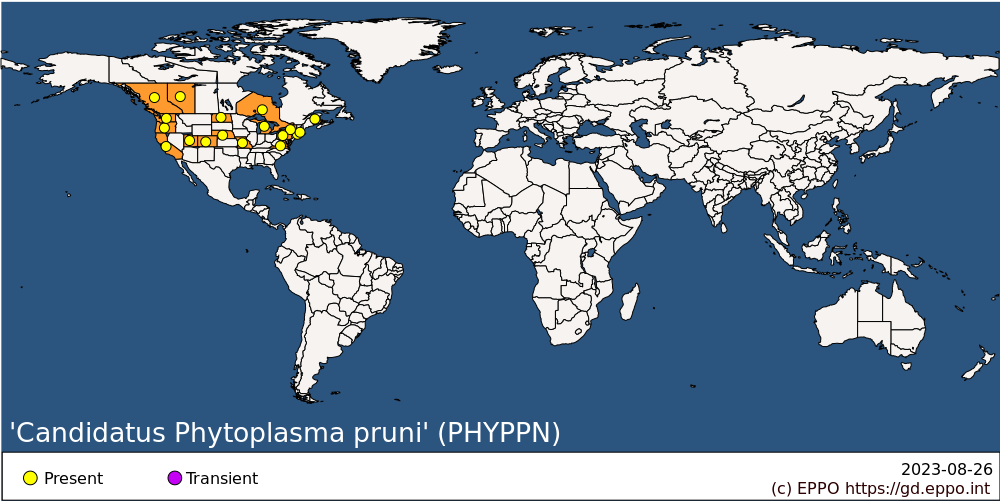 The X-disease phytoplasma is spread in nature by at least 13 species of polyphagous leafhoppers (Rosenberger & Jones, 1977; Rahardja et al., 1992; Purcell, 1996; Uyemoto & Kirkpatrick, 2011). In the Western United States, Colladonus montanus, C. geminatus, Fieberiella florii, Scaphytopius acutus and some Osbornellus species are the most important vectors, while Paraphlepsius irroratus appears to be the most important vector in Michigan and other eastern states. Although peach is highly susceptible to X-disease phytoplasma and readily infectible by graft-inoculation, it is a very poor host for acquisitions by leafhopper vectors. Thus, peach is regarded as a dead-end host (Purcell, 1996). In the Eastern United States, X-disease-infected chokecherry and bitter cherry trees, residing in close proximity to peach orchards, serve as the primary pathogen reservoirs from which leafhopper vectors readily acquire the X-disease phytoplasma. However, in the central valley of California, where wild Prunus hosts are absent, diseased sweet cherry trees are the most important pathogen source (Kirkpatrick et al., 1995; Uyemoto & Kirkpatrick, 2011). In the foothills of California and in the cherry-growing areas of Washington state, chokecherries growing in the vicinity of orchards serve as a pathogen reservoir. Other ornamental trees of the genus Prunus may be potential pathogen reservoirs. Also, species from other genera may also function as reservoirs, but their role in the epidemiology of the pathogen is not known (Guerra, 1997; Marcone et al., 2014).

Since X-disease phytoplasma differentially colonizes plant tissue throughout the season, variations in transmission rates following graft-inoculations have been observed in many instances for this pathogen. Work by Uyemoto & Luhn (2006) has shown that in sweet cherry the transmission rate was 10% in spring (June) whereas it reached 64% in summer (August), irrespective of the age of the shoots used as inoculum. Besides cherry sources, graft-transmissions using scion buds from X-disease-affected peach trees, collected in June yielded a high transmission rate (55%). Similar results were obtained by Suslow & Purcell (1982) and Kirkpatrick et al. (1990), who demonstrated that the ability of the leafhopper vector C. montanus to acquire the X-disease phytoplasma from diseased sweet cherry trees correlated with the seasonal variation of the phytoplasma titre occurring in the leaves. X-disease phytoplasma in spring initially colonized and multiplied in the fruit peduncles rather than in the leaves reaching the highest concentration in peduncles when fruits were mature. Later, after ripening and senescence of the fruits, the pathogen persisted and continued to increase in the leaves. Therefore, the highest rates of infective C. montanus individuals were recorded in August-September. Rosenberg & Jones (1977) reported on the seasonal variations in transmission of X-disease phytoplasma in peach and chokecherry trees following graft-inoculations. The highest transmission rates were obtained in June-August (82-100%) and May-June (100%) for peach and chokecherry, respectively. The pathogen was also transmitted during winter, although at a low percentage in peach. Using DAPI fluorescence tests, Douglas (1986) monitored the distribution of X-disease phytoplasma in diseased peach and chokecherry trees during two growing seasons, finding a good correlation between symptom severity and extent of phytoplasma invasion. However, in chokecherry, pathogen invasion occurred earlier and was more extensively distributed than that observed in peach trees. The incubation period in peach or P. virginiana depends very much on the stage of development of the tree at the moment of infection. Symptoms are seen 6 weeks after the beginning of growth if buds were inoculated in the previous year. The latency period in the insect vector is 22-35 days for C. geminatus and 45 days for S. acutus.

X-disease-infected chokecherry trees which are common in the Northern USA and Eastern Canada are characterized by a pronounced reddening of the foliage. By contrast, in Western Canada, infected trees develop only mild reddening. Other symptoms include shortened internodes, sterility of flowers and decline (Guo et al., 1996; Hiruki & Wang, 1999). In diseased pin cherry trees, witches’-brooms develop after breaking of dormancy of the axillary buds and formation of erect and spindly axillary shoots. The witches’-broom formations often die during winter (Hiruki & Wang, 1999).

X-disease-affected trees of several cultivars of Japanese plum show foliar symptoms such as general chlorosis and reddening, small fruits which are of low quality, and tree death, that usually occurs within one or two years from the appearance of foliar symptoms. Trees of almond, apricot and European plum naturally infected with the X-disease phytoplasma show no obvious foliar symptoms and no detrimental effects on fruit quality or quantity (Kirkpatrick et al., 1995).

Electron microscope studies (Nasu et al., 1970; Granett & Gilmer, 1971; MacBeath et al., 1972) have shown the presence of typical phytoplasma bodies in sieve tube elements of X-disease-infected plants and in the the leafhopper vector Colladonus montanus (Nasu et al., 1970; Granett & Gilmer, 1971; MacBeath et al., 1972; Guo et al., 1996). The phytoplasma bodies were bounded by a unit membrane, lacked a rigid cell wall and were found to possess, in their cytoplasm, dispersed strands resembling DNA and ribosome-like particles. They were typically pleomorphic, in general spherical or filamentous. The size of spherical forms ranged from 200 to 400 nm in diameter whereas filamentous bodies were up to 5400 nm in length. However, the phytoplasma bodies observed in C. montanus and celery plants were larger and less elongated than those occurring in various Prunus species (Granett & Gilmer, 1971).

X-disease phytoplasma can be tested by inoculation on peach seedlings (cv. Elberta or GF305) in the field, but 4 years are needed for results to be certain. It can also be tested for on the same indicators in the glasshouse, symptoms appearing up to 3 months after inoculation.

DAPI fluorescence tests and transmission electron microscope (TEM) observations were employed for detection of phytoplasmal infections in X-diseased stone fruit trees (Granett & Gilmer, 1971; MacBeath et al., 1972; Jones et al., 1974; Douglas, 1986; Guo et al., 1996). However, microscopic methods are not appropriate in epidemiological studies to identify plant reservoirs or insect vectors for a given phytoplasma because they do not allow pathogen identification. Also, these methods are limited when the phytoplasma population is very low and unevenly distributed among the plant host organs, as it is often true for woody plants.

Polyclonal antisera and monoclonal antibodies have been produced against the X-disease phytoplasma and were successfully used in ELISA, ISEM and immunofluorescence staining tests to detect the pathogen in several plant hosts as well as in the leafhopper vectors C. montanus and P. irroratus (Sinha & and Chiykowski, 1984, 1986, 1990; Kirkpatrick & Garrot, 1984; Jiang et al., 1989; Guo et al., 1996, 1998a,b). However, due to lack of specificity and sensitivity, serological methods are not widely employed for diagnostic purposes.

PCR is the most widely used method to detect and identify the phytoplasma. Universal phytoplasma primers as well as X-disease group-specific primers have been designed, directed to ribosomal or non-ribosomal DNA sequences. Primers amplifying rDNA sequences are the most extensively used (Smart et al., 1996; Guo et al., 2000; Hadidi et al., 2011). The sensitivity of detection can be increased by nested PCR.

The X-disease phytoplasma is not seed-transmissible. The pathogen is spread locally by insect vectors whereas it is spread internationally by infected planting material or insect vectors carried on this material.

X-disease is economically important in peach and sweet and sour cherry in many eastern and western fruit-growing regions of the United States and Canada (Kirkpatrick et al.,1995, 2011; Uyemoto & Kirkpatrick, 2011). Entire cherry orchards are likely to be lost in the foothills of California and in the cherry-growing areas of Washington state, where chokecherries growing in the vicinity of orchards serve as a pathogen reservoir and several additional species of leafhopper vectors are present (Kirkpatrick et al., 2011). X-disease currently causes losses in peach and cherry in Michigan but usually only a few trees per acre are affected (Kirkpatrick et al., 2011).

Use of healthy plant material, removal of infected plants and effective control of the insect vectors are important measures for managing the X-disease phytoplasma (Lacy, 1981; Douglas & McClure, 1988; Kirkpatrick et al., 1995; Uyemoto & Kirkpatrick, 2011). Healthy plants should be used for establishing new orchards. Therefore, rootstocks and scion wood should be tested with an appropriate method to ensure that they are free from infections. Primary pathogen reservoirs should be properly identified and removed. Injections of tetracyclines into diseased trees result in the temporary remission of X-disease symptoms and in reduced transmission of the diseases by leafhopper vectors that obtain the inoculum from treated trees (Cooley et al., 1992). However, this control method is not use in practice because of the cost involved, the injury caused to trees, and the possibility of antibiotic residue in the fruits (Kirkpatrick et al., 1995; Uyemoto & Kirkpatrick, 2011).

In the EPPO region, peach, the main host, has the greatest economic importance of all Prunus spp. There are probably susceptible European cultivars, and, in any case, American cultivars are frequently introduced. Of the North American vectors, at least Fieberiella florii occurs in Europe and there may also be local insects which might act as vectors. The production of healthy planting material of Prunus requires the exclusion of the X-disease phytoplasma, reported to be seriously damaging if control measures are not properly applied. The fact that new American peach cultivars are regularly imported into Europe points strongly to the real risk which exists. The experience with peach latent mosaic viroid (EPPO/CABI, 1996), introduced into Europe in very similar circumstances, should not be forgotten.

Countries may prohibit import of Prunus planting material from countries where the phytoplasma is present. Alternatively, it can be recommended that Prunus planting material should come from a field inspected during the growing season and, particularly for material from countries where the pest is found, the material should be subject to an official certification scheme, with particular emphasis on preventing reinfection of healthy material by airborne vectors. The EPPO certification scheme for Prunus fruit trees (EPPO,2001a,b), though intended to be used primarily within the EPPO region, provides a suitable model.

Douglas SM (1986) Detection of mycoplasma-like organisms in peach and chokecherry with X-disease by fluorescence microscopy. Phytopathology 76, 784-787.

This datasheet was extensively revised in 2022 by Professor Carmine Marcone, University of Salerno (IT). His valuable contribution is gratefully acknowledged.

This datasheet was first published in the EPPO Bulletin in 1986 and revised in the two editions of 'Quarantine Pests for Europe' in 1992 and 1997, as well as in 2022. It is now maintained in an electronic format in the EPPO Global Database. The sections on 'Identity', ‘Hosts’, and 'Geographical distribution' are automatically updated from the database. For other sections, the date of last revision is indicated on the right.