Monochamus impluviatus is a trans-Siberian species, recorded from the Ural Mountains to the Russian Far East, as well as in Mongolia, Northern China and the Northern part of the Korean peninsula (Pavlovskii & Shtakelberg, 1955; Lindeman, 1979; Izhevskiy et al., 2005; Danilevsky, 2014; Karpiński et al., 2018). 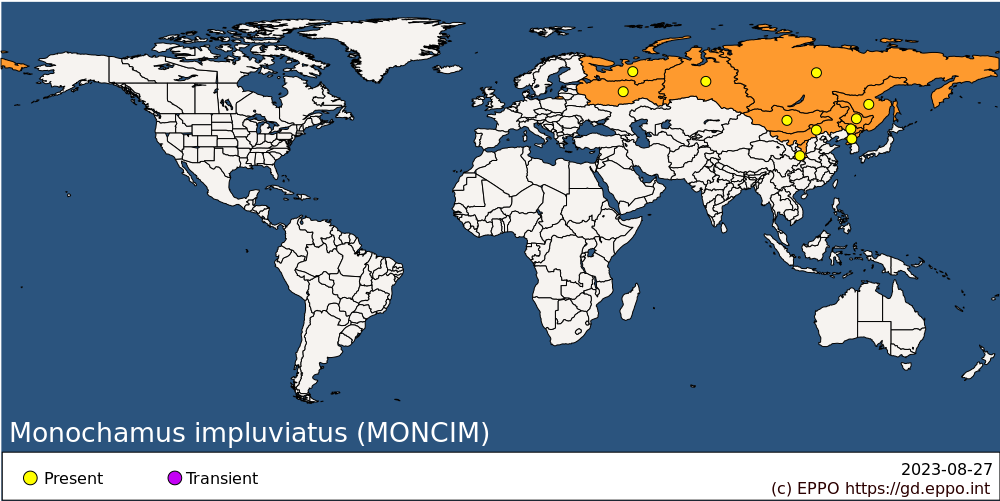 In Russia, the mass flight period of M. impluviatus is usually in May and June, although it can last until August in some regions (Izhevskiy et al., 2005); it is the species with the earliest flight period in the genus Monochamus. Even in Yakutia (Russia) and other areas in the extreme North the flight begins in June. The pest normally flies during sunny days in wide open spaces such as large felled areas of conifers. As soon as flight begins, maturation feeding occurs on needles, then on the bark on branches of young larch and pine trees and later on the bark on branches of mature trees. Maturation-feeding usually lasts for 12–15 days. After the beginning of maturation-feeding, the females begin to lay eggs. Beetles continue to fly and lay eggs in July. The female makes incisions 3–4 mm wide in the bark of the middle and top parts of trunks (and sometimes in the bark of thick branches) and lays one to three eggs into those incisions. . Within the genus Monochamus, M. impluviatus is considered to be the most damaging as it can attack healthy and slightly stressed trees. It may also attack dying and cut trees (cut not more than 1 year ago) (Florov, 1951; Plavilshchikov, 1958; Rozhkov et al., 1966; Cherepanov, 1983).

Embryonic development usually takes 10–27 days. The neonate larva feeds first in the bark, phloem and sapwood, leaving long irregular patches filled with frass. 20 to 25 days after hatching from the egg the larva enters the wood and makes a gallery 3–15 cm long and 0.5–2.0 cm wide, firstly at right angles to the long axis of the trunk, then turning upwards and returning to the surface of the trunk. Thus, the gallery always begins and finishes at the same side of the trunk and the emergence hole is situated above the entrance hole, usually at the distance of 1.5–2.0 cm. Sometimes, the larva returns to clean the frass from the gallery from and to feed in the phloem and sapwood. The entrance hole is oval, elongated along the trunk and measures from 5 x 2 to 9 x 4 mm. The emergence hole is round, 5–6 mm in diameter. The larva overwinters in the gallery. In spring it slightly extends the gallery and prepares a cell for pupation at a depth of 2–3 mm below the bark. The pupation cell is 21–28 mm long and 6–8 mm wide with the head of the pupa oriented in the direction of the bark. The pupal development takes 25–32 days in May and 7–13 days in June. The developmental cycle of M. impluviatus normally takes 1 year, but in mountains above 1000 m it may sometimes take 2 years (Florov, 1951; Pavlovskii & Shtakelberg, 1955; Plavilshchikov, 1958). When the developmental cycle of the pest takes two years the first overwintering of the young larvae is in the phloem and sapwood under the bark, and it is only during the second season that the larva makes a gallery deep in the wood (Rozhkov et al., 1966; Cherepanov, 1983).

Characteristic symptoms are: large entrance and emergence holes in trunks, bark becoming detached, frass at the base of infested trees, beetles sitting on the trunks and horizontal galleries made by mature larvae. The needles of attacked trees often show yellowing and wilting.

The egg is white, elongated, slightly curved, rounded at both ends, 3.1 mm long, and 1.0 mm wide. The chorion is matt silver-coloured, covered by small cells (Cherepanov, 1983).

The larva of M. impluviatus is generally yellowish-white, without legs, 17–23 mm long. It may be distinguished from other Monochamus larvae by a number of characteristics including the distribution of hairs on the front border of the pronotum, the presence of a depression on the epistoma and the shape of the front corners of the pronotum. The head is brown, up to 3.2 mm wide, slightly narrowed in the front part, half retracted into the prothorax. The epistoma is orange in the front half and white in the back half. The antennae are short and are orange brown. The mandibles are black. The width of the pronotum is twice as long as its length. The pronotum is yellow and narrowed in the front part. The basisternum is sclerotised on the front border and has reddish hairs on the lateral sides. The meso- and metasternum have multiple granules in the middle forming two transverse rows separated by a fissure. The abdomen is yellowish-white, with reddish hairs on the lateral sides. Dorsal ambulatory warts (ampullae) are prominent with white granules forming four transverse rows and one curved row from each lateral side. A spot of five granules is situated between the lateral curved row and the transverse rows. Ventral ampullae are separated by a transverse fissure. One or two transverse rows of granules are situated on the front side of the fissure, and one transverse row of granules is situated on the back side of the fissure. The weight of the larva before pupation is 140–301 mg (Florov, 1951; Rozhkov et al., 1966; Cherepanov, 1983).

The pupa is white, 15–20 mm long and 4.5–6.0 mm wide (in the abdomen part). It is easily recognised by the distribution of small spines on the frons and short antennae curved in rings. The head is large with a longitudinal fissure with curved rows of small acute spines on each side in the front part of the antennae. A transverse row of six bristles is situated on the front border of the frons. The pronotum is transverse and prominent. The femurs have a transverse row of small acute spines at the top. The abdomen is large at III and IV segments, then narrows to the back, with a longitudinal fissure on the dorsal side. Tergites have 2–3 transverse rows of small acute spines on the back part and on each side of the fissure. These spines form narrow transverse stripes. The top of the abdomen has a conic urogomphal outgrowth, which finishes with a sclerotised spines. The weight of the pupa is 126–274 mg (Florov, 1951; Rozhkov et al., 1966; Cherepanov, 1983).

The adult of M. impluviatus is blackish, 11–20 mm long. It may be easily distinguished from other Monochamus beetles by a number of characteristics including the well-developed sharp punctuation at the base of elytra, the presence of speckles formed by small grey hairs on the elytra, rather thick antennae, and short (for Monochamus) elytra. The head is rounded and widely punctuated at the back border. The vertex has a depression and a round yellow spot. The frons is prominent, covered by grey hairs and has a small punctuation and a central longitudinal fissure. The eyes are sharply facetted. The pronotum is transverse, with a conic lateral prominence on each side, with wide irregular punctuation and irregular ochre and grey hairs forming four round spots on the back part. The scutellum is triangular and short, covered by yellowish and grey hairs, with a longitudinal stripe. The length of the elytra is 2–3 times longer than their width. The elytra have parallel borders, narrowed at the back part, with well-developed sharp punctuation at the base, covered by ochre and grey hairs forming a pattern of small speckles. The front legs are almost equal in length to the other legs. The mid tibia has a brush of golden-brown bristles on the external distal part. The underside of the body is covered by grey hairs lying flat. The female antennae are striped (the base of the segments have rings of grey hairs), slightly longer than the body or almost of equal length. Male antennae are black, 1.5 times longer than the body. The weight of the young beetle is 125–246 mg (Florov, 1951; Plavilshchikov, 1958; Rozhkov et al., 1966; Cherepanov, 1983).

As no data is available on natural spread of M. impluviatus, it is assumed (based on the literature on other Monochamus species, e.g. M. galloprovincialis or M. sutor) that adults can fly several kilometres. Because larvae of M. impluviatus are hidden in the wood and therefore difficult to detect, they may be easily transported with untreated coniferous wood products moving in trade. Adults might also be carried as hitchhikers on planting material.

Opinions about the importance of M. impluviatus are divided. According to many scientists, M. impluviatus is one of the most important, widely spread, and frequent pests of larch, Siberian and other pines, and other conifers in its present geographical range. It can attack slightly stressed and healthy trees of different ages and continues to damage the same trees for several consecutive years causing their death. This species prefers to attack mature trees and, even in cases when it does not kill them, the infestation results in significant loss of vigour and of wood marketability (because of the bore holes). It is one of the most frequent pests of Siberian forests that have been stressed by Dendrolimus sibiricus and other defoliators or damaged by forest fires. The pest occurs in all types of forests and landscapes, including mountains (Florov, 1951; Zemkova, 1965; Ivliev & Kononov, 1966; Averenski, 1971; Krivosheina & Kompantsev, 1987). Other scientists, however, believe that the importance of M. impluviatus is not very high and that the pest is not frequent and not widely distributed (Plavilshchikov, 1958; Isaev, 1966; Rozhkov et al., 1966; Kondakov et al., 1979). This difference of opinion is possibly due to differences between the importance of the pests in the different regions and different tree species studied by different authors. M. impluviatus has not yet been demonstrated to be a vector of wood nematodes of the genus Bursaphelenchus, but it is considered as a possible vector (Kulinich & Orlinskii, 1998).

Because it causes the death of trees, M. impluviatus is able to alter ecological relationships where conifers are an important component of ecosystems.

Control efforts are undertaken in the area of the present distribution of M. impluviatus. Control measures include forestry and sanitary measures (improving the resistance of forests, cutting and eliminating infested trees), treatments with chemical and biological products (Rozhkov, 1966; Vorontsov, 1995).

Monochamus impluviatus is on the A1 list of Kazakhstan (added in 2017), the A2 list of Russia (added in 2014), and the A2 list of the Eurasian Economic Union (EAEU; added in 2016). It is considered by many authors as a very serious forest pest in some of the areas where it occurs. It is likely to establish in all coniferous areas within the EPPO region. It is unlikely to be transported in planting material since the species does not attack branches, small trunks or roots which constitute planting material (except during the phase of additional feeding). Adults may, however, be resting on the surface of such material. Conifers are important forest trees in many parts of the EPPO region.

The major risk of spreading of M. impluviatus is with coniferous wood in which eggs, larvae, pupae, and young adults might be under the bark and/or in the wood. Adults might also be transported on the surface of trunks, cut branches, or planting material. Wood should be debarked and inspected for bore holes prior to any transportation. Cut branches and plants for planting should be carefully inspected.

A first datasheet on Monochamus impluviatus was prepared in 2002 in the framework of the EPPO Project on quarantine pests for forestry. It was revised in 2021 and is now maintained in an electronic format in the EPPO Global Database. The sections on 'Identity', ‘Hosts’, and 'Geographical distribution' are automatically updated from the database. For other sections, the date of last revision is indicated on the right.