Meloidogyne enterolobii was described by Yang & Eisenback (1983) from roots of pacara earpod trees (Enterolobium contortisiliquum), on Hainan Island in China. In 1988 Rammah and Hirschmann described M. mayaguensis from roots of eggplant (Solanum melongena) from Puerto Rico and indicated that this new species ‘superficially resembles M. enterolobii’ but shows ‘several distinct morphological features and a unique malate dehydrogenase pattern (N3c)’. Karssen et al. (2012) re-studied the holo- and paratypes of both species and confirmed M. mayaguensis as a junior synonym for M. enterolobii.

The root-knot nematode Meloidogyne enterolobii is polyphagous and has many host plants including cultivated crops and weeds. It infests herbaceous as well as woody plants. The main hosts of commercial importance include Coffea arabica (coffee) [it is noted that while coffee can be susceptible to some populations of M. enterolobii, it has been reported as resistant to other ones (see details in the control paragraph)], Gossypium hirsutum (cotton), Cucumis sativus (cucumber), Solanum melongena (eggplant), Psidium guajava (guava), Carica papaya (papaya), Capsicum annuum (pepper), Solanum tuberosum (potato), Glycine max (soybean), Ipomoea batatas (sweet potato), Nicotiana tabacum (tobacco), Solanum lycopersicum (tomato), and Citrullus lanatus (watermelon). For G. hirsutum, Brito et al. (2004) reported that four Florida isolates of M. enterolobii reproduced on this host, which confirmed the original description by Yang & Eisenback (1983). Recently this nematode was found infesting cotton under field conditions in North Carolina, USA (Ye et al., 2013) and Brazil (Galbieri et al., 2020). While C. papaya has been found infested by M. enterolobii in the field (Lima et al., 2003; Souza et al., 2006; Brito et al., 2008), the cultivars Formosa and Papaya when inoculated with a nematode population collected from P. guajava were reported as non-hosts (Freitas et al., 2017). The host status is determined by calculating the reproductive factor RF (RF = final population (Pf) / initial population (Pi); RF ≥ 1, good host; 0.1< RF <1.0, poor host; RF ≤ 0.1, non-host) (Sasser et al., 1984). It is expected that many more plant species will be hosts of M. enterolobii than currently known, since this is the case with other polyphagous Meloidogyne spp.

M. enterolobii has been reported from several countries in North, Central and South America, Africa and Asia. Its present distribution in warmer climates suggests that this species will not survive outside greenhouses in northern countries of Europe, but it might be able to establish in the Mediterranean region. For Europe M. enterolobii was first recorded in a greenhouse in France (Blok et al., 2002), but the pest is no longer present. It has also been reported from two greenhouses in Switzerland associated with severe damage on tomato and cucumber (Kiewnick et al., 2008) and Portugal from some private gardens on Cereus hildmannianus, Lampranthus sp., Physalis peruviana and Callistemon sp. detected during a survey (Santos et al., 2019). 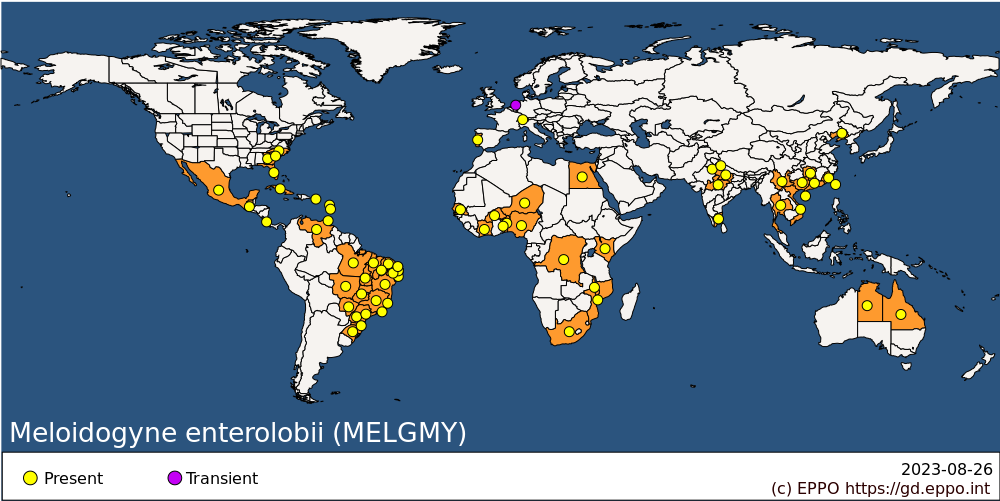 M. enterolobii like other species of root-knot nematodes, is a sedentary endoparasite. Second-stage juveniles (J2) hatch from eggs in the soil or root debris and migrate towards the root tip of candidate host plants. Using their stylet or wounds, juveniles enter the unsuberized epidermal cells near the root tip and migrate within the cortical tissue until they initiate a permanent feeding site in close proximity to the vascular tissue. Juveniles soon lose their mobility and become sedentary. At the same time, feeding of the J2 on root cells induce those cells to differentiate into multinucleate nursing cells, so-called giant cells. The surrounding tissue starts to divide giving rise to a typical root gall or root-knot. During their further development juveniles swell to become sausage- shaped and undergo three moults before they reach adult stages. Adult females are pear-shaped and found almost completely embedded in the host tissue. Eggs are laid by the female in a gelatinous sac near the root surface (Moens et al., 2009). Adult males are vermiform and found free in the rhizosphere or near the protruding body of the female. As for other Meloidogyne species, reproduction is nearly almost always parthenogenetic. The life cycle of M. enterolobii takes 4–5 weeks under favorable conditions and it has been reported that on I. batatas females produce around 460–500 eggs per egg mass (Brito et al., 2020).

Second-stage juveniles are vermiform, annulated, tapering at both ends, 250–700 µm long, 12–18 µm wide, tail length 15–100 µm and hyaline tail part 5–30 µm in length (Yang & Eisenback, 1983; Rammah & Hirschmann, 1988). Females are characteristically globular to pear-shaped, pearly-white and sedentary. Their body is annulated, 400– 1300 µm long, 300–700 µm wide and shows lateral fields each with 4 incisures. The stylet is dorsally curved, 10– 25 µm long, with rounded to ovoid stylet knobs, set off to sloping posteriorly. The perineal pattern is round to ovoid; the arch is moderately high to high and usually rounded. The vermiform males are annulated, slightly tapering anteriorly, bluntly rounded posteriorly, 700–2000 µm long and 25–45 µm wide. The stylet is 13–30 µm long, with stylet knobs, variable in shape.

M. enterolobii closely resembles other tropical root-knot nematodes such as M. incognita, M. arenaria and M. javanica. In general, it can be separated from other species within the genus by perineal pattern shape, male and female stylet morphology; morphology of the male; body length and morphology of the lip region, as well as tail and hyaline tail part in second-stage juveniles according to EPPO Standard PM 7/103 (EPPO, 2016). The other two Meloidogyne species which are on the EPPO lists of pests recommended for regulation, namely M. chitwoodi and M. fallax, are usually not associated with M. enterolobii and can also be clearly distinguished by their demarcated hyaline tail end.

The presence of M. enterolobii in infested soil and planting material can be determined by sampling of suspected material and subsequent extraction of second-stage juveniles using standard methods described in the EPPO Standard PM 7/119 on Nematode Extraction (EPPO, 2013a). Root samples should also be collected, it is particularly necessary to extract females to aid species identification. Microscopic examination at 800–1000 times magnification is necessary for correct identification of the nematode species. Presence of males can assist in identification. However, as morphological characters of M. enterolobii are often similar to other Meloidogyne species, identification to species level is usually based on a combination of morphological/morphometrical characters and biochemical or molecular methods (isozyme electrophoresis, PCR or real-time PCR). For details see the EPPO Diagnostic Protocol (EPPO, 2016). The real-time-PCR protocol recommended for M. enterolobii identification has also been used successfully outside of the EPPO region by another Regulatory Agency to identify this nematode species on both regulatory and diagnostic samples (Moore et al., 2020a; 2020b).

Nematode populations in the soil tend to decline in the absence of a host (McSorley, 1998) and they reproduce better on good host. Therefore, detection of the nematodes through field inspection and soil sampling is more sensitive if done as close as possible to the time of harvest of a host crop, targeting particularly susceptible plants. It is imperative that samples collected are representative of the entire sampled field. When nematode densities are believed to be extremely low, a larger number of cores that comprise a sample may be needed, this is particularly important for samples taken for regulatory purposes.

As is the case for other plant-parasitic nematodes M. enterolobii’s own movement is limited at most to a few tens of centimetres in the soil. The main pathways for nematode dissemination are via infested planting material and soil, such as traded host plants for planting (including cuttings) with roots, non-host plants for planting with soil attached, other traded soil bearing products such as potatoes, soil attached to equipment and machinery, travelers, soil as such and irrigation water (EPPO, 2010).

General management strategies for root-knot nematodes have been reviewed by Coyne et al. (2009) and Nyczepir & Thomas (2009). Taking into account the banning of most chemical nematicides, resistance, crop rotation and the use of non-host crops or black fallow, and good weed control are the most efficient methods for reducing M. enterolobii populations. Unfortunately, the list of non-host plants is limited, including cabbage, garlic, grapefruit, maize, peanut, sour orange and Welsh onion. Brito et al. (2007a) reported that two carrot cultivars and Brassica oleracea (collard) allowed very little or no nematode reproduction. Of various selections of Phaseolus vulgaris, P. lunatus, Vigna radiata, V. unguiculata and Canavalia ensiformis being tested for their susceptibility to M. enterolobii only P. vulgaris cv. Alabama was resistant (Crozzoli et al., 2011). Attempts to identify sources of resistance to this nematode species in tomato and pepper germplasms have failed. For instance, all 101 cultivated and wild tomato genotypes tested were susceptible (Silva et al., 2019), and none of the 24 pepper accessions were resistant (Soares et al., 2018). However, significant progress has been made and some resistance to M. enterolobii has been identified on sweet potato (Schwarz et al., 2020). Squash and lettuce showed some resistance towards M. enterolobii (Bitencourt & Silva, 2010) and eight genotypes of soybean turned out to be tolerant to M. enterolobii while 60 genotypes were susceptible (Dias et al., 2010b). Compared to annual crops, more sources of resistance towards M. enterolobii have been reported for perennial crops such as the R Mia resistance gene in Prunus persica (peach) rootstocks (Claverie et al., 2004; Nyczepir et al., 2008), the Ma gene in Prunus cerasifera (Myrobalan plum) (Rubio-Cabetas et al., 1999) and a newly detected resistance in the wild Psidium guineense was successfully used to develop a hybrid guava rootstock, ‘BRS Guaraçá’, which was released in 2018 (Castro, 2019; Costa et al., 2012; Souza et al., 2018 ). Although coffee has been reported as a host for M. enterolobii (Decker & Rodriguez Fuentes, 1989), all seven coffee cultivars tested with a nematode population initially isolated from guava were resistant (Alves et al., 2009). However, three out of seven coffee cultivars tested with another population originally collected from coffee in Costa Rica (Muniz et al., 2009) proved to be susceptible. Further studies are needed to clarify the genetic variability, if any, among populations of this nematode species collected from different host plants around the world.

With increased global trade, special attention should be given to the importation of plants for planting (e.g. seedlings and slips), plant products and soil from areas where M. enterolobii occurs. Reports of M. enterolobii in glasshouses in the EPPO region clearly demonstrate that it has the potential to enter Europe (Blok et al., 2002; Kiewnick et al., 2008). It also has been detected on several occasions in the USA during routine regulatory sampling at ornamental nurseries in Central and South Florida which has a comparable climate to Southern Europe (Brito et al., 2002; Brito et al., 2010, Han et al., 2012; Moore et al., 2020a; 2020b). It is very likely that this species can survive in the warmer parts of the EPPO region and in glasshouses throughout the EPPO region. In addition, this species was detected on roses (plants for planting) originating from China (see EPPO RS 2008/107), thus suggesting that it can also survive slightly cooler temperatures. As mentioned above M. enterolobii is highly virulent and produces more root galls than other root-knot nematodes, as the correlation between root galling and yield loss is well known (Ploeg & Phillips, 2001; Kim & Ferris, 2002), it is expected that M. enterolobii will cause yield losses similar to M. incognita and M. javanica, which are well established in large parts of the EPPO region. Once root-knot nematodes have been introduced, it is in general difficult to control or eradicate them.

Measures similar to those recommended by EPPO to contain or eradicate Meloidogyne chitwoodi and M. fallax (EPPO, 2013b) would be relevant.

Anonymous (2018b) Declaration of emergency. Office of Agriculture and environmental sciences horticulture and quarantine. Department of Agriculture and forestry. State of Louisiana. Baton Rouge, LA. Available at: https://www.doa.la.gov/osr/EMR/2019/1906EMR020.pdf. Accessed July 13, 2020.

Kiewnick S, Dessimoz M & Franck L (2009) Effects of the Mi-1 and the N root-knot nematode-resistance gene on infection and reproduction of Meloidogyne enterolobii on tomato and pepper cultivars. Journal of Nematology 41, 134–139.

This datasheet was extensively revised in 2020 by Janete A. Brito. Her valuable contribution is gratefully acknowledged.

This datasheet was first published in the EPPO Bulletin in 2014 and revised in 2020, it is now maintained in an electronic format in the EPPO Global Database. The sections on 'Identity', ‘Hosts’, and 'Geographical distribution' are automatically updated from the database. For other sections, the date of last revision is indicated on the right.