Margarodes greeni appears to be fairly polyphagous. It has been recorded on the roots of Kikuyu grass (Cenchrus clandestinus) (de Klerk, 1978); apple (Malus domestica), possibly damaging trees (de Klerk, 1978); blueberry (Vaccinium section Cyanococcus cv. 'Suziblue', apparently not causing damage (recent unpublished record, Allsopp, pers. comm, 2022); and grapevine (Vitis vinifera) (Brain, 1915), damaging and killing vines (de Klerk, 1978). Grapevines and blueberries would be the hosts at risk in the EPPO region. The indigenous host plants of this ground pearl have not been identified yet. 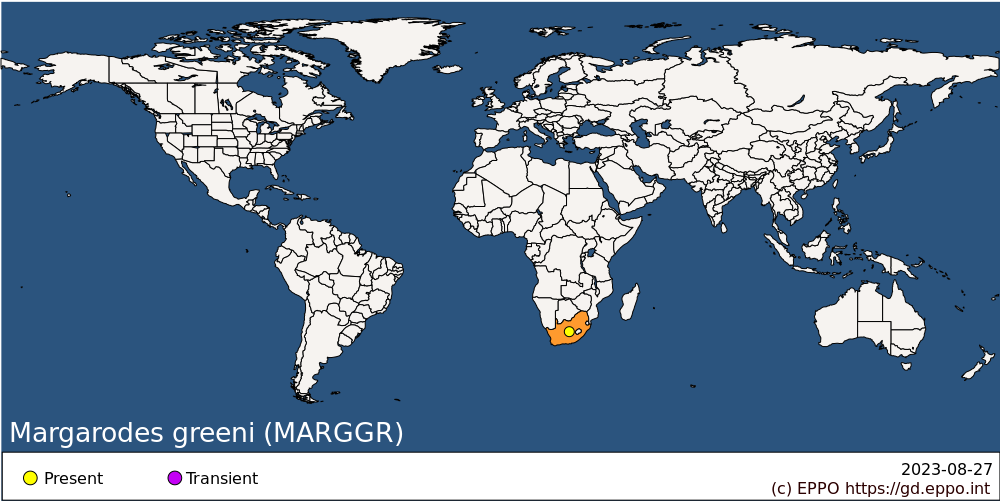 Apparently, M. greeni is parthenogenetic, as males have never been recorded and the adult females have not been observed visiting the soil surface to seek mates (de Klerk, 1978; de Klerk et al., 1982); there is probably one generation per year, but the biology has never been studied. Its biology may be similar to that of M. capensis (De Klerk, 1978) and M. vredendalensis (De Klerk, 1980), which were studied under laboratory and field conditions and showed great similarity. The biology of the other South African Margarodes species has not been studied.

Based on the data for M. capensis and M. vredendalensis, it is assumed for M. greeni that: the cysts would occur mostly at a depth of 46-60 cm, in the zone of greatest root abundance, but could occur as deep as 120 cm; <20% of cysts would develop into adult females annually, emerging between the end of November and the beginning of March; eggs would be laid in clusters in the soil close to grapevine roots, in pockets lined with secreted wax filaments, and they would hatch after 34-43 days; newly hatched nymphs would disperse through the soil and attach by their mouthparts to rootlets 0.5-1.2 m below the soil surface to feed; nymphs would become sessile and moult to the legless second-instar nymphal cyst stage, which grows before secreting a protective waxy covering and going through multiple moults to form a pearl-like, dormant non-feeding cyst which is resistant to unfavourable conditions. Cysts would remain attached to the roots by the long mouthparts (de Klerk, 2017) and could remain viable in the soil for several years; their maximum longevity is not known.

Infestations of vineyards by species of Margarodes, including M. greeni, are usually patchy. Over several years the patches increase in size, presumably because of the gradual subterranean dispersal of the first-instar nymphs and adult females. Infested vines exhibit gradual loss of vigour, shoots become thinner and shorter, and the leaves become smaller (Annecke & Moran, 1982) and tend to point downwards (de Klerk, 2017). One or more of the branches may die, followed in severe infestations by the eventual death of the whole plant within five or six years; the duration of this process varies but happens much faster if the vines are stressed by either too much or too little water (de Klerk, 2017). Ground pearl infestation symptoms resemble those caused by grapevine phylloxera (Daktulosphaira vitifoliae (Fitch), Hemiptera: Aphidomorpha: Pylloxeridae), but in the case of M. greeni no root or leaf galls are formed.

The appearance of the first-instar nymphs has not been documented (de Klerk, 1978). They are likely to be similar to those of M. capensis, in which first-instar nymphs are creamy white, elongate, 0.84-0.91 mm long, with antennae and legs clearly visible under the dissection microscope (Jakubski, 1965; de Klerk, 1978, de Klerk et al., 1982). The second-instar cysts (ground pearls) are small and approximately spherical, up to 2.5 mm in diameter, amber yellow to deep bronze-coloured (Jakubski, 1965) or white to amber yellow, thin-walled and hard, almost smooth but with transverse lines on ventral surface (de Klerk, 1978). When the hard outer layers are removed, the insect within is bright white. The slide-mounted cyst has 6 pairs of abdominal spiracles, all about the same size; cicatrices number only 2 or 3 on each side, between the anus and the last pair of abdominal spiracles (de Klerk 1978). For detailed morphological description and illustration of the cyst stage of M. capensis, see de Klerk et al. (1982).

According to Jakubski (1965) and de Klerk (1978), the ovoid, white to amber yellow adult females of M. greeni are each about 2.5-3.0 mm long and about 2.5 mm wide, with abdominal segmentation clearly visible on both surfaces; body with setae relatively sparse on dorsum, more numerous on venter; they have characteristic enlarged fossorial (digging) forelegs with heavily sclerotised dark-brown claws, and 6 pairs of abdominal spiracles. Multilocular pores irregularly dispersed over marginal and median areas of both surfaces of head, thorax and abdomen; spines sharply pointed, dorsally absent from medial areas but sparsely present on marginal areas of metathorax and abdomen present on margins and mid-venter of the thorax and abdomen; spines on marginal areas of venter sparse on the metathorax and becoming fewer posteriorly, whereas in medial areas they are few on the metathorax but become more numerous posteriorly (de Klerk, 1978). For detailed morphological description and illustration of the adult female stage, see de Klerk et al. (1982). Being parthenogenetic, this species does not produce any males.

Authoritative identification requires detailed microscopic study of the cysts and/or adult females by a scale insect specialist. Prior to identification, specimens may be preserved in 70% ethanol. De Klerk et al. (1983) and Watson (2022) provide morphological keys to live cysts, slide-mounted cysts and adult females, of ten South African Margarodes spp. including the five species that infest grapevine roots (M. capensis, M. greeni, M. prieskaensis, M. trimeni and M. vredendalensis). The adult female of the South American species, M. vitis, is described by Jakubski (1965) but there is no key provided to identify the species so it is very difficult to use for identification purposes. Foldi & Soria (1989) provide descriptions and illustrations of the adult female and cyst stage of M. vitis but no identification key.

In vineyards, patches of possible infestation can be detected visually by looking for groups of vines exhibiting poor growth, small leaves curling downwards and dieback. Adult female M. greeni do not appear at the soil surface because they do not need to mate (de Klerk, 1978, 2017). To confirm the presence of M. greeni, it is necessary to dig down to the main concentration of vine roots (between 0.5-1.2 m depth), where the roots and the soil closely surrounding them should be examined. If root galls are found, then vine phylloxera (Daktulosphaira vitifoliae) or root-knot nematodes (Meloidogyne spp.) may be responsible for the damage. If root galls are not found, the inspection should look for white to amber yellow or deep bronze-coloured, subspherical cysts each up to 2.5 mm in diameter, almost smooth but with transverse lines on ventral surface (de Klerk et al., 1982; Watson, 2022). Cysts attached to roots or free in the soil are present throughout the year and easily detected.

Natural dispersal of M. greeni is extremely limited due to the subterranean habit of the insect; the first-instar crawlers and adult females within the soil are the only natural dispersal stages. However, infestation can be spread within and between vineyards or blocks of vines within a vineyard on soil cultivation implements (de Klerk, 2017). All the developmental stages may be transported over long distances from infested areas via human-assisted spread on grapevine plants for planting (when moved with roots and soil attached) and / or in soil.

There is no data available on the actual economic impact of M. greeni. Ground pearls devitalize the host directly by sap and nutrient depletion, and vines sometimes die within five or six years (de Klerk, 2017). Infestation of vines stressed by drought or nematode infestation can result in them dying in patches. The pest is difficult to control due to its subterranean habit and even after an interval of several years, vineyards replanted in infested soils are readily reinfested. Once infested, land may become unsuitable for commercial vineyard cultivation indefinitely (de Klerk, 1978, 2017).

Although many European and American varieties of Vitis vinifera have been tested, no resistant cultivars have been found; nor have any natural enemies of M. greeni been documented. Consequently, the only possible control has been with insecticides, which presents technical problems because the target insects live 0.5-1.2 m underground. Soil drenches of systemic insecticides applied to control Planococcus ficus mealybugs shortly after harvest (in autumn), when the annual population of new cysts starts feeding and translocation in vines is still active, can reduce ground pearl infestations. As cysts can survive in the soil for years without feeding and only a certain percentage of cysts annually develop into adult females (de Klerk, 1978), follow-up treatments in successive years are essential. Fumigation for nematodes before planting could reduce numbers of females if done at the time when the females are active (but this method is not officially registered). After first treatments, annual revaluation of pest presence is necessary to decide on the need for any follow-up treatments (de Klerk, 2017).

Where an infestation of M. greeni has resulted in removal of the vines, the pest might be eliminated eventually by growing a series of annual crops over four or more years, because the cyst stage probably lasts longer than one year (de Klerk, 2017). However, since the native hosts of M. greeni are not known, there is uncertainty as to what type of annual crops would not serve as hosts for the ground pearls.

As M. greeni is a parthenogenetic species, there is no sex pheromone to exploit to monitor population levels by trapping males.

Margarodes greeni occurs widely in the Western Cape province of South Africa, including Vredendal and Lutzville along the West Coast, Piketberg, Malmesbury, Paarl and Stellenbosch in the southwestern Cape, Ceres, Worcester, Robertson and Montagu, where the climate varies with altitude between hot, arid desert (Köppen-Geiger climate type BWh), warm, dry temperate (Csa and Csb) and cold, arid steppe (BSk; based on De Klerk, 1978). Across the EPPO region a variety of soil types and climates occur, and grapevines are widely cultivated, so it is assumed that M. greeni would be able to establish in the EPPO region (EFSA, 2019), particularly in drier Mediterranean areas. M. greeni can remain dormant as cysts in the soil for many years, making it extremely difficult to eradicate, so it is important to exclude it from the EPPO region.

A number of EPPO countries already ban the import of Vitis plants for planting (other than seeds) (e.g. EU countries: Annex VI, point 10 of Regulation /2072 (EU, 2019)) and prohibit the import of soil. Other appropriate phytosanitary measures to regulate import of Vitis (other than seeds) with roots into the EPPO region could require that these plants are produced in a pest-free area (including for the whole country) or in a pest-free place/site of production for M. greeni, established according to EPPO Standard PM 5/8 Guidelines on the phytosanitary measure ‘Plants grown under physical isolation’ (EPPO, 2016). Rooted grapevine plant material destined for export from South Africa has to be treated with both hot water and insecticide before shipment, to reduce the risk of infestation, and additional treatments are sometimes required on arrival in the country of destination. Host plants for planting could also be imported using post-entry quarantine (in the framework of a bilateral agreement).

This datasheet was first published online in 2022. It is maintained in an electronic format in the EPPO Global Database. The sections on 'Identity', ‘Hosts’, and 'Geographical distribution' are automatically updated from the database. For other sections, the date of last revision is indicated on the right.