L. diadecturus is present in Essex County in Ontario, Canada, from where it was originally described by Eveleigh & Allen (1982). US populations of this species from Arkansas (Robbins et al., 1995; Neilson et al., 2004; Ye et al., 2004) and Oklahoma (Robbins et al., 1995) have been reported. Robbins & Brown (1991) indicated that L. diadecturus is widely distributed in Central USA, and that nematode specimens from Iowa previously recorded as L. macromucronatus (Norton et al., 1984) had been mis-identified and are considered to be specimens belonging to L. diadecturus. However, there is no detail as to how these conclusions were made, or to which nematode populations [and their respective origin(s)] this refers to (EFSA, 2017). A population assigned to this species has also been reported from Wuhan of Hubei Province, China (Barsalote et al., 2018). 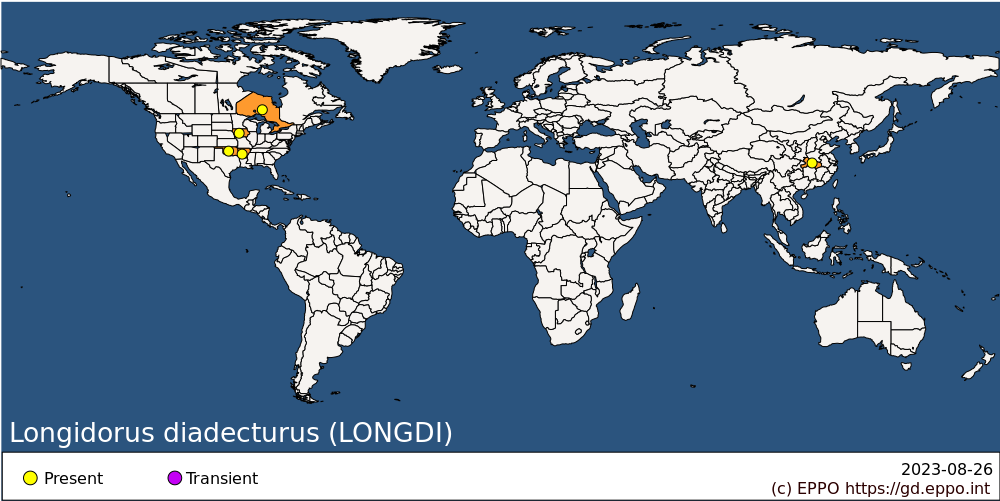 L. diadecturus Eveleigh and Allen, 1982 is a needle nematode within the family Longidoridae. It was described from nematode populations recovered from soil around peach trees in South-Western Ontario (Essex County), Canada (Eveleigh and Allen, 1982). L. diadecturus nematodes are migratory ectoparasites that feed on root tips causing small galling and stunting of roots (Taylor and Brown, 1997). No details regarding the life cycle of L. diadecturus have been reported. As this nematode has been assigned to the genus Longidorus, it is assumed that the life cycle is similar to that of other species within the genus, having six stages: the egg, four juvenile stages and the female adult. Males have not been recorded and it is also assumed that L. diadecturus reproduces parthenogenetically (Robbins et al., 1995). L. diadecturus is recognised as a vector of PRMV (Eveleigh and Allen, 1982); PRMV is also transmitted by certain species of Xiphinema and is the only nepovirus that is transmitted by vectors belonging two different nematode genera (Brown et al., 1988). Nematode-borne viruses are transmitted by juveniles and adults through feeding activity. Differences in virus transmission between different developmental stages of the vector have not been reported (EFSA, 2017). The virus may not persist inside Longidorus species for extended periods; PRMV does not multiply within the nematode and may be lost during moulting (Taylor and Brown, 1997). Uncertainties exist regarding the persistence of PRMV within the nematode, in addition to the transmission period and frequency of transmission of the virus (EFSA, 2017).

An EPPO Diagnostic Protocol is available for Longidorus diadecturus PM 7/145 (EPPO, 2020) in addition to a supplementary description (Prior et al., 2020).

In the absence of virus infection, the aerial parts of plants grown in soil infested with Longidorus spp. display few symptoms, unless population levels are high. In such cases, swellings close to the root tips (terminal galling) and typical symptoms of root damage (such as reduction in vigour or signs similar to those that occur when a plant is under limited water conditions) may be observed (EPPO, 2020).

L. diadecturus nematodes are minute (females being from 3.32–4.02 mm in length) (Prior et al., 2020), soft-bodied, vermiform, nearly transparent animals. They have a hard, needle-like 'stylet' (odontostyle and odontophore) at the mouth-end of the body which is capable of being extruded to puncture plant cells. L. diadecturus can be grouped with 17 other species assigned to the genus, in having a guiding ring around mid-odontostyle when in retracted position (L. jonesi-group) with cheilostome ≥51 µm (group C5 according to Chen et al. 1997; Loof & Chen, 1999; Prior et al., 2020).

Identification of Longidorus species is based on morphological and morphometric characteristics (Chen et al., 1997).  L. diadecturus can be differentiated from morphologically similar species by the posterior position of the stylet guiding ring, shape of the lip region, stylet length of 168–187 µm; odontostyle and odontophore length of 109–121 µm and 55–66 µm, respectively and body length (Eveleigh & Allen, 1982; Robbins & Brown, 1991; Ye & Robbins, 2004; Prior et al., 2020). For details see PM 7/145 Longidorus diadecturus (EPPO, 2020).

Identification of this species is extremely difficult and time-consuming and should only be carried out by trained personnel.

Longidorus species, as with most ectoparasitic plant‐parasitic nematodes, can be isolated from the soil or growing media by different extraction techniques, e.g. the Flegg-modified Cobb technique, Oostenbrink elutriator or other elutriation methods (EPPO, 2013). Sampling of the soil or growing media should not be performed using small diameter augers as these may damage longidorid nematodes (EPPO, 2020). Further sampling guidelines can be found in EPPO PM 4/35 (1) Soil test for virus–vector nematodes (EPPO, 2009).

L. diadecturus is entirely soil living, feeding on roots of plants. Bare rooted plants free from soil do not, therefore, present a pathway for movement. The pest is transported solely in soil associated with plants for planting, plant products (such as ware potatoes contaminated with soil), bulk soil and any other goods contaminated with soil. Dispersal over longer distances is possible in moist soil transported with or without plants. Soil and growing media attached to (agricultural) machinery, tools and packaging materials may also constitute a pathway for movement, but such soil may dry out and consequently lead to reduced viability of the pest.

Surveillance and soil testing should be carried out for known hosts of L. diadecturus and the associated PRMV nepovirus, such as peaches and grapes, prior to planting (EFSA, 2017). Disinfection of soil can be carried out by physical (heat, steam) or chemical (nematicides) measures – the efficacy of these measures is limited and the nematodes that remain in the soil can still transmit viruses to the roots of the host plants (EFSA, 2017). Soil treatments do not eliminate nematodes under field conditions due to the vertical distribution of the nematode and soil migration (EFSA, 2017). The use of nematicides has been limited in many countries and at present, no methods are available to control nematode populations in an established plantation of fruit trees (NVWA, 2010). Use of certified plants for planting, with pest-free places/sites of production is suitable to obtain pest-free planting material (EFSA, 2017).

The pest categorization prepared by EFSA (2017) concludes that suitable host plants are present in the EU and that if introduced, L. diadecturus may be able to establish. Host plants are also present elsewhere in the EPPO region, consequently this assessment is valid for the region.

The main phytosanitary risk lies in the known potential of L. diadecturus to transmit the American nepovirus PRMV, which is also a quarantine organism.

Machinery and vehicles moved out of an infested area should be cleaned (ISPM 41).

This datasheet was prepared in 2022 by T. Prior, GB. His valuable contribution is gratefully acknowledged.

This datasheet was first published online in 2022. It is maintained in an electronic format in the EPPO Global Database. The sections on 'Identity', ‘Hosts’, and 'Geographical distribution' are automatically updated from the database. For other sections, the date of last revision is indicated on the right.