Ips hauseri attacks certain species of Picea, Pinus and Larix. In Kyrgyzstan, this species was considered as a monophagous pest of Picea schrenkiana but, after the introduction in 1930/1932 of Pinus sylvestris, Pinus pallasiana and Larix sibirica into this area, it became a serious pest of these trees, especially of P. sylvestris (Prutenskii & Romanenko, 1954; Pavlovskii & Shtakelberg, 1955; Makhnovskii, 1966; EPPO, 2020, online; CABI, 2020, online).

It was considered that I. hauseri is an endemic species of the Tien Shan mountains of China and Kyrgyzstan and its distribution limited to the Picea schrenkiana forests of the Central and West Tien Shan by the mountain ranges of Dzhungarsky, Zailiisky, Kungei and Terskei Ala Tau, as well as of the Chatkalski and Ferganski (Stark, 1952). Later, this species was found in areas of neighbouring countries (Kazakhstan and Tajikistan) and Turkey, where it infested Picea schrenkiana as well as pine and larch trees (Prutenskii & Romanenko, 1954; Kostin, 1964; Maslov, 1988; EPPO, 2005; Kadyrov, 2007; Alonso-Zarazaga et al., 2017; Douglas et al., 2019). 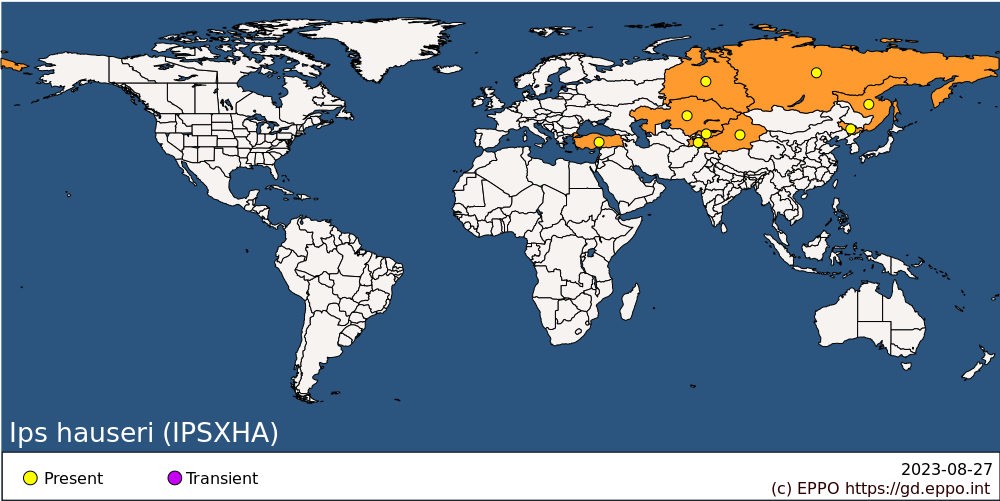 The area of origin of I. hauseri is the mountains of Central Asia where the Schrenk's spruce P. schrenkiana grow. Its rate of development depends on altitude, and also on the position and exposure of the host tree. The developmental cycle takes one year at altitudes of 2200–3200 m, whereas at 1200–1400 m, the pest develops two complete generations per year. The flight period of I. hauseri lasts from the beginning of May to the end of June. In accordance with the research carried out in the Medeo mountains (Kazakhstan), at an altitude of 2244 m with a temperature of 12-14 °C the beetle flights begin in the first decade of May (Mandelshtam et al., 2019; Petrov et al., 2019). Adults make emergence holes, leave pupation cells and begin additional feeding. They usually ﬂy during sunny days. The number of emergence holes is usually less than the number of emerging beetles because some use holes made by other individuals. Where there are two generations per year, the development of the first generation (from eggs to adults) takes an average of 40 days. The additional feeding of young beetles takes place in the bark of trees where larval development occurred and lasts longer than the larval feeding, approximately 40–50 days. Additional feeding galleries have irregular shapes and are oriented lengthwise along the trunk. When the bark is thin, the insects are sometimes obliged to move to another feeding site but, where the bark is thick, they usually finish the feeding phase in the same area. At altitudes of 1200–1400 m, young beetles of the first generation start to lay eggs at the beginning of August. Young adults of the second generation appear in September/October. The species usually overwinters in the adult stage, less often in the larval stage. Young adults overwinter under the bark, close to the site of larval development.

I. hauseri may attack trees without symptoms of stress, but also stressed, dying and recently cut trees. It prefers to attack trunks and large branches of mature trees situated in well-lit locations but, at a high population level, it may also attack young trees of 5–6 cm in diameter. It usually begins to attack the top parts of trunks, and branches larger than 5–6 cm in diameter in the top of the crowns. Then, its attacks by new arriving beetles move down along the trunk. Finally, the pest occupies the entire trunk from the root collar to the top of the crown. In comparison with other spruce bark beetles, I. hauseri increases its population numbers very rapidly (Parfentiev, 1951; Prutenskii & Romanenko, 1954; Makhnovskii, 1966; Toktoraliev, 1979a; Toktoraliev et al., 1984; Maslov, 1988).

I. hauseri is polygamous. Each pest family group usually includes one male and 2–8 females (usually 3–5 females). Female galleries start from a common copulation chamber and go either downwards (most frequently) or upwards in the tree. The female gallery may reach 8–14 cm in length and 1.5–3.0 mm in width. Galleries are free from frass. One female lays 20–45 eggs, and one family produces 40–160 eggs (80 on average). Eggs are laid in special holes made by the female on both sides of the female gallery. The intervals between these holes are shorter at the beginning of the female gallery and longer at the end. Some holes do not contain eggs. Larval galleries are short, they reach 3–4 cm in length, are much widened at the end and finish with pupation cells. Galleries are made mainly in the phloem and bark on lower trunk parts of P. schrenkiana but in the sapwood and phloem of upper parts. On young P. sylvestris, galleries are only in the sapwood and phloem. At low altitudes, egg development takes 9–15 days, larval development takes 20–25 days, and pupae development takes 8–13 days. At high altitudes, the development of the different stages takes much longer (Parfentiev, 1951; Prutenskii & Romanenko, 1954; Makhnovskii, 1966; Toktoraliev, 1979b).

The characteristic symptoms of I. hauseri are: the frass on the bark surface, the flow of resin coming from the places where attempts have been made to enter the bark, species-specific gallery systems with a central chamber and radial female and larval galleries, and sparse crowns of coniferous trees with partly dead tops and branches. The needles of attacked trees often show yellowing or reddening and wilting beginning from the tops of trees.

The larvae and adults are similar in size. They are white, cylindrical and legless, with small, brown, chitinous heads and brown mandibles (see Kalina, 1969).

Adults of I. hauseri are reddish-black, bright, with an elongated body, 3.5–5.3 mm long, 2.6-2.8 times longer than wide. The whole body is covered by sparse yellowish-brown hairs. Intervals between longitudinal fissures on the elytra are not punctuated. At the tail end, each elytrum has four teeth situated around the elytral declivity. For males, the third, finger-shaped tooth is the widest and longest. Female teeth are smaller than male teeth and are almost uniform in size. The surface of the elytral declivity is mat (Prutenskii & Romanenko, 1954; Douglas et al., 2019).

Symptoms of I. hauseri attacks (frass, resin flow, etc.) are easy to detect by visual examination. In addition, the nuptial chambers, maternal galleries, larvae and pupae are easy to find under the bark. In the later phase of infestation, the entrance holes and galleries under the bark can be found on standing trees. Similar symptoms can also be observed on fallen trees or logs.

Natural spread by adult flight is limited. All life stages of I. hauseri may be easily transported with untreated spruce, pine and larch wood commodities having bark, and with infested cut branches (including Christmas trees). Beetles may be present on the surface of trunks, young beetles may stay under the bark. Eggs, larvae and pupae may remain under the bark too. It is difficult to detect the pest at an early stage of tree or branch infestation.

It is considered that I. hauseri is the most important xylophagous pest of Picea schrenkiana in the region of its present distribution (Lynch et al., 2019). Its importance is considered comparable to that of Ips typographus on other species of spruce. After introduction of P. sylvestris, P. pallasiana and L. sibirica into Central Asia in the 1930s, it became an important pest of these trees, particularly of P. sylvestris. The pest may attack slightly stressed and apparently healthy trees of different ages but it prefers to attack mature trees and, even when it does not kill them, the infestation results in significant loss of vigour and decrease of wood and seed production as well as reduction in wood marketability. The pest mainly occurs in mountain forests, which are very important for soil protection against erosion and, in many cases, causes the death of forests. Its capacity for very fast development, with rapid population build-up, increases the injuriousness of I. hauseri. The pest is usually the first to attack almost healthy or slightly stressed trees, and then is often followed by outbreaks of other wood borers. I. hauseri often kills plantations of spruce and pine trees in Kazakhstan and Kyrgyzstan (Prutenskii & Romanenko, 1954; Kostin, 1964; Lynch et al., 2019). A survey of spruce trees in Kazakhstan (Medeo) shows that I. hauseri usually infests the spruce Picea schrenkiana together with other pests such as Dryocoetes autographus, Hylastes substriatus, Hylurgops palliatus, Orthotomicus suturalis, Pityophthorus kirgisicus, Trypodendron lineatum (Mandelshtam et al., 2019; Petrov et al., 2019). I. hauseri is particularly dangerous in years of drought (Parfentiev, 1951; Pavlovskii & Shtakelberg, 1955; Marikovskii, 1956; Makhnovskii, 1966; Toktoraliev, 1979a,b; Toktoraliev et al., 1984; Lynch et al., 2019).

Official control efforts are undertaken in the area of the present distribution of I. hauseri. Control measures include silvicultural and sanitary measures (improving the resistance of forests, cutting and elimination of all infested trees, cutting of ‘trap trees’ followed by their treatment), treatments with chemical products. Natural enemies do not apparently play a significant role in regulation of I. hauseri populations (Toktoraliev et al., 1984).

19 entomophagous species have been found in I. hauseri galleries. The most predominant is Corticeus fraxini which is a typical predator of I. typographus (Nikityuk, 1957). It actively feed on the larvae, pupae and young beetles of I. hauseri. Nudobius lentus is an active predator of I. hauseri eggs. Several Staphylinidae spp., such as Placusa complanata, Phloeonomus lapponicus were found in galleries of I. hauseri (CABI, 2020, online).

In recent years, much attention has been paid to apply against bark beetles, in particular against Ips typographus, the European ant beetle Thanasimus formicarius. It is assumed that this predator can also be applied against I. hauseri (Gninenko et al., 2016). The most widespread parasites of I. hauseri are Dinotiscus eupterus and Rhopalicus tutela (CABI, 2020, online) but natural enemies do not apparently play a significant role in regulation of I. hauseri populations (Toktoraliev et al., 1984).

The natural range of I. hauseri includes mountainous regions in Central Asia, with a climate similar to that in many parts of North and Central Europe. This pest is therefore likely to find suitable conditions and susceptible host plants (notably, P. sylvestris) in many areas within the EPPO region. If introduced into these areas, it is likely to be a serious forest pest, as it is in the areas where it now occurs.

In 2004, I. hauseri was added to the EPPO A2 list of pests recommended for regulation as quarantine pests. Measures used for other Ips spp. would also be suitable for I. hauseri. The following phytosanitary measures recommended by the EPPO Standard PM 8/2 (3) ‘Coniferae’ (EPPO, 2018) are considered to be effective against bark beetles including I. hauseri. Plants for planting, cut branches (including cut Christmas trees), round wood or other parts of the host plants of I. hauseri from countries in which I. hauseri is present should originate from a pest-free area. If not, the following phytosanitary measures are required to import round wood from the area where the pest is present: wood should be bark-free or heat-treated (EPPO, 2009a), or fumigated with appropriate fumigant, or treated with ionizing radiation (EPPO, 2009b). Harvesting wood residues, processing wood residues, hogwood and wood chips of the host should be produced from debarked wood or heat-treated. The heat treatment is also required for import of isolated bark. Wood packaging materials should meet requirements of ISPM no. 15 (IРРС, 2018). When wood with bark is moved in international trade, it should be transported through the pest-free areas, or outside of the pest flight period, or to be in closed containers to prevent infestation.

Prutenskii DI, Romanenko KE (1954) [Ips hauseri. Its role and importance for the death of forests of Picea schrenkiana and Pinus sylvestris in Kirgizia]. In: Proceedings of the Institute of Botany & Plant Industry, Izdatel’stvo Kirgizskogo Otdeleniya Akademii Nauk SSSR, Frunze (KG) 1, 177–191 (in Russian).

This datasheet was extensively revised in 2020 by Dr. O.A. Kulinich. His valuable contribution is gratefully acknowledged.

This datasheet was first published in the EPPO Bulletin in 2005 and revised in 2020. It is now maintained in an electronic format in the EPPO Global Database. The sections on 'Identity', ‘Hosts’, and 'Geographical distribution' are automatically updated from the database. For other sections, the date of last revision is indicated on the right.