Considering that a clear morphological distinction between I. subelongatus and I. cembrae is difficult, it is generally accepted that I. subelongatus is widespread in Asia and present in the north of the European part of Russia, and that I. cembrae is present in Europe (EPPO, 2005; 2021; EFSA, 2017; Gao et al., 2000; CABI, 2021; Douglas et al., 2019). In the future, identifying these species will require DNA analysis, especially for beetles from areas where the ranges of these species overlap. 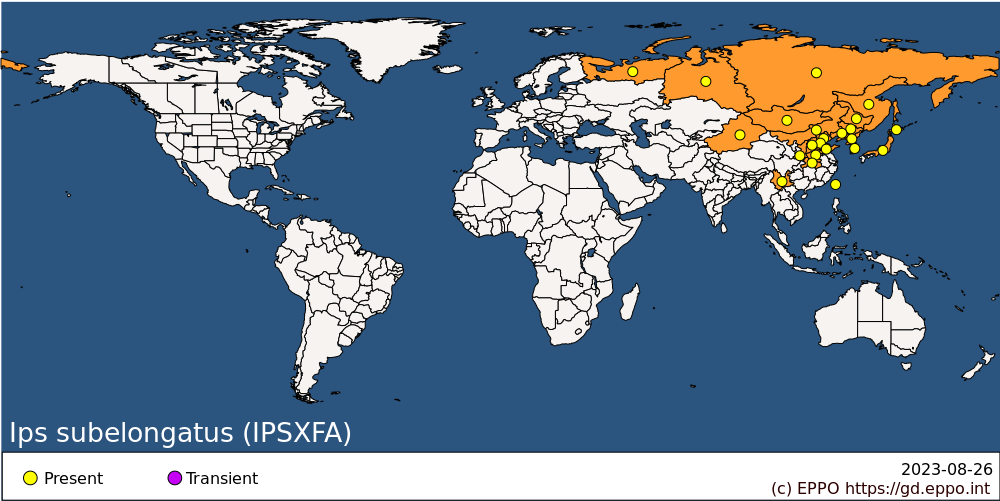 The first (spring) mass flight of I. subelongatus usually occurs from mid-May to the end of June in the southern part of the area of its distribution, when midday temperature reaches 16–20°C, and lasts for 15–17 days. The lower threshold temperature for I. subelongatus flight was estimated as 5.97°C, with 42.95 degree-days required for initiation of spring flight (Lee et al., 2019). Adults aggregate in response to pheromones (Qiu et al., 1988; Zhang et al., 2000). After making galleries and laying eggs, some adults begin a second (‘sister’) flight, forming a ‘sister’ generation (Issaev, 1966; Maslov, 1988). This usually occurs from the end of June to the end of July in the same region and lasts 22–23 days. The adults from the first generation meanwhile continue additional feeding and enter diapause to prepare for overwintering. Sister generations follow in succession. Most adults overwinter in forest litter, whereas pupae, larvae and some adults overwinter under host bark (Schneider, 1977).

I. subelongatus may lay eggs in stressed trees, but more usually in dying trees and cut trunks. The form and the depth of galleries varies greatly depending on the health of the tree. Female galleries, 3.0–3.5 mm wide, are usually 16–18 cm long but may sometimes reach 27 cm. Adults need additional feeding, which usually occurs on the trunk at the region of larval development, but, in the case of shortage of food, may also be on roots and at the zone of thin bark at the top of the trunk and on the branches. These galleries are characterized by high quantities of frass.

For I. subelongatus, characteristic symptoms are: flow of resin coming from the places where attempts have been made to lay eggs, typical gallery system with central chamber and radial larval galleries, sparse crowns of larch trees with partly dead tops and branches. Pest-infested trees often wilt and die.

Body. 4.2-6.5 mm long, 2.6 times longer than wide; pronotum 1.1-1.2 times longer than wide. There are four spines on the elytral declivity. I. subelongatus is distinguished from I. typographus by the shiny elytral declivity and interstrial punctures of the elytral disk, and from I. cembrae by more densely setose elytral declivity and larger body size (I. cembrae are usually only 3 to 5 mm long). It differs from North American Picea-feeding species and I. woodi by the space between the first and second spines, which is less than the length of the first spine (Сognato, 2015; Douglas et al., 2019).

I. subelongatus can be detected by visual inspection of trees showing signs of damage. During a pest attack, sawdust is ejected from the entrance holes, and when young adults begin to feed on phloem around the passages, the bark can flake off. Pest detection can also be done with pheromone traps. The species can be identified based on morphological parameters, but DNA analysis is necessary to accurately distinguish it from I. cembrae. In trees attacked by these Ips species, the death of the crown of trees is observed. The sapwood of attacked trees turns blue due to blue stain fungi that beetles carry.

Laboratory experiments have shown that adult Ips sp. can fly continuously for several hours. In the field, however, flight has only been observed to take place over limited distances and then usually downwind. It was found that some individuals of Ips sp. can fly up to 45 km, but the distance for most of the beetles was 5 km (Jactel & Gaillard, 1991).

Dispersal over longer distances occurs via transportation of the pest under the bark of logs. It is assumed that the distribution area of I. subelongatus was Asia, but later this species was introduced into the European part of Russia, probably with non-debarked wood (Douglas et al., 2019). There is little risk of movement with plants for planting, but Ips spp. could be carried as contaminating pests on other wood commodities.

I. subelongatus is a secondary pest in native Larix plantations, breeding in logs, wind-blown stems and dying trees. Drought conditions may promote pest attack on drought stressed trees. The situation for I. subelongatus has a much greater economic impact in Russia because larch (Larix sibirica) constitutes a much more important element of Siberian forests.

I. subelongatus is regarded as one of the most serious pests of larch in the Asian part of the EPPO region. The most severe damage is usually observed in larch forests previously attacked by Dendrolimus sibiricus, Dasychira albodentata, Semiothisa continuaria, Xylotrechus altaicus and other pests, or damaged by forest fires, and is very often followed by outbreaks of other wood borers (scolytids, cerambycids and others), particularly, Scolytus morawitzi, Monochamus sutor, M. impluviatus, Melanophila guttulata (Issaev, 1966; Yu et al., 1984; Maslov, 1988; Vorontsov, 1995). I. subelongatus may continue to attack the same tree over several years. In particular, larvae sometimes encircle trunks feeding in the phloem, which may lead to the death of the infested tree.

As in the case of other conifer bark beetles, I. subelongatus is a vector of blue-stain and other phytopathogenic fungi (Ceratocystis laricicola, Ceratocystiopsis minuta, Ophiostoma brunneociliatum, Ophiostoma piceae), which also damage the tree (Redfern et al., 1987; Yamaoka et al., 1998; Stauffer et al., 2001). Several fungal species belonging to four genera (Ceratocystiopsis, Endoconidiophora, Leptographium and Ophiostoma) associated with I. subelongatus have been identified in China on various species of larch (Larix spp.) and pine (Pinus sylvestris var. mongolica) (Liu et al., 2017; Wang et al., 2020). Researchers believe that it is these phytopathogenic fungi that can cause the death of trees.

The main control measures for I. subelongatus are similar to those used for the control of other bark beetle species. The most effective measure is the sanitation felling of infested standing trees, as well as the harvesting of diseased and windthrown trees (to remove pest breeding substrates). These measures prevent the emergence of a new generation of beetles. In order to prevent the further development of bark beetles (pupae or young adults inside the bark) the immediate debarking of logs is recommended, followed by the destruction, processing or composting of the bark. Pheromone mass-trapping can also be implemented locally (Stoakely et al., 1977; Rebenstorff et al., 1982; Niemeyer, 1989). Quarantine measures should be implemented to prevent entry into areas where I. subelongatus is absent. The main pathways of bark beetle entry are: wood commodities of plant hosts (plants for planting, non-squared wood, bark and wood packaging material, including dunnage) from countries where the pest occurs.

Nematodes, micro-organisms, parasitoids and predators may play a role in regulation of I. subelongatus populations (Gusteleva, 1982; Vorontsov, 1995) but studies to confirm this assumption have not been carried out.

It is believed that I. subelongatus was previously present only in Asia but was introduced into Europe (north-eastern European Russia) (Douglas et al., 2019). I. subelongatus is not explicitly regulated by the European Union but, since it is virtually absent from Europe, it can be considered as a member of the category ‘non-European Scolytidae’, which is regulated by the EU (EFSA, 2017). In accordance with the phytosanitary requirements of the EU, wood commodities are exported from Asian Russia (where I. subelongatus is present) to the EU without bark.

In general, I. subelongatus is reported to be more damaging to the local Larix species, and more in need of control in Asia than I. cembrae in Europe (Stauffer et al., 2001). I. subelongatus also presents a risk to other continents where Larix plantations are present, particularly North America. This pest has been not found in any EU countries, and may pose a threat to larch plantations in the EU territory.

The main risk of spreading I. subelongatus is associated with the transportation of plant-host logs, mainly larch, which may contain eggs, larvae, pupae and adults under the bark.

Phytosanitary measures against I. subelongatus can be the same as for other bark beetle species (I. typographus, I. sexdentatus, I. hauseri, etc). The following phytosanitary measures recommended by the EPPO Standard PM 8/2 (3) ‘Coniferae’ (EPPO, 2018) are considered to be effective against bark beetles including I. subelongatus. Plants for planting, cut branches (including cut Christmas trees), round wood or other parts of the host plants of I. subelongatus from countries in which this pest is present should originate from a pest-free area. If not, the following phytosanitary measures are required to import round wood from the area where the pest is present: wood should be bark-free or heat-treated (EPPO, 2009a), or fumigated with an appropriate fumigant, or treated with ionizing radiation (EPPO, 2009b). Harvesting wood residues, processing wood residues, hogwood and wood chips of the host should be produced from debarked wood or heat-treated. The heat treatment is also required for import of isolated bark. Wood packaging materials should meet requirements of ISPM no. 15 (IРРС, 2018). When wood with bark is moved in international trade, it should be stored and transported through the pest-free areas, or outside of the pest flight period, or in closed containers to prevent infestation.

Cognato A I, Sun JH (2007) DNA based cladograms augment the discovery of a new Ips species from China (Coleoptera: Curculionidae: Scolytinae). Cladistics 23(6), 539-551.

Jactel H and Gaillard J (1991) A preliminary study of the dispersal potential of Ips sexdentatus with an automatically recording flight mill. Journal of Applied Entomology 112, 138-145.

Qiu HG, Fu WJ, Qi YT, He LF and Ling XD (1988) [Studies on the aggregation pheromone of Ips subelongatus. II. The relationship between aggregation behaviour and the host plant tree.] Contributions from Shanghai Institute of Entomology 8, 67–72 (in Chinese).

Schneider HJ (1977) [Experience in the control of the large larch bark beetle in stands of low vitality.] Allgemeine Forst Zeitschrift 32, 1115–1116 (in German).

This datasheet was extensively revised in 2021 by Dr Oleg Kulinich (All-Russian Center for Plant Quarantine). His valuable contribution is gratefully acknowledged.

This datasheet was first published in the EPPO Bulletin in 2005 and is now maintained in an electronic format in the EPPO Global Database. The sections on 'Identity', ‘Hosts’, and 'Geographical distribution' are automatically updated from the database. For other sections, the date of last revision is indicated on the right.