The northern bark beetle I. duplicatus is a Eurasian species. The pest is widespread in Russia and neighboring Asian countries (Douglas et al., 2019; CABI, 2021). In Europe it was originally restricted to northern countries, however, it has expanded its distribution range to Eastern Europe. In the middle of the last century, I. duplicatus spread to the southeast and has recently been moving west (Wermelinger et al., 2020). 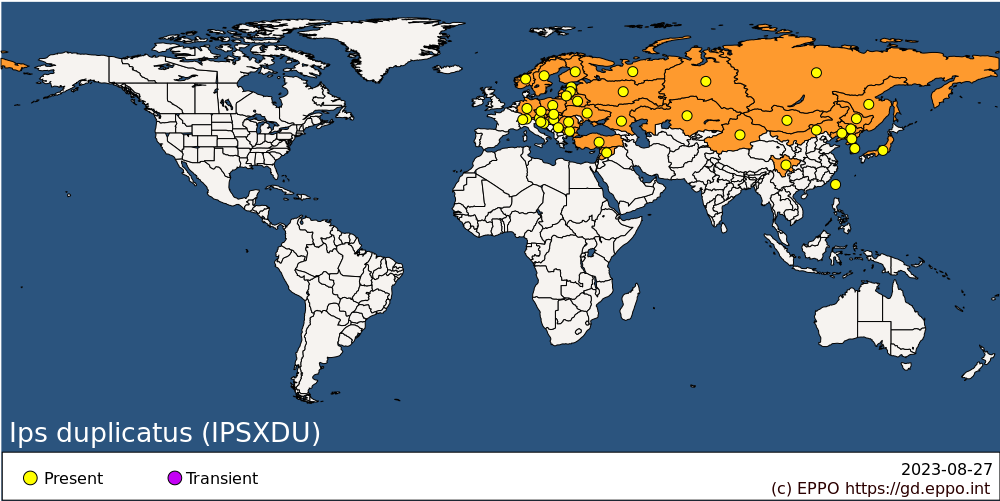 The northern bark beetle Ips duplicatus is native to Northern Europe, Siberia, and East Asia. It is adapted to low temperatures, short growing seasons, and usually has one generation per year in these areas (Wermelinger еt al., 2020). In the southern regions, where it is spreading as a result of the expansion of its range, it can have two to three generations per year, depending on climatic conditions. I. duplicatus has a very similar biology to the widespread European spruce bark beetle I. typographus.

I. duplicatus usually overwinters as an adult stage in forest litter, but beetles can also overwinter in the phloem of trees when the last generation has not had time to complete full development. It most often attacks standing trees, 40-70 years old, which have been weakened by drought stress, or by pathogens, but rarely attacks fallen trees or cut logs (Izhevskiy et al., 2005; Holuša & Grodzki, 2008; Holuša et al., 2010; Wermelinger et al., 2020). Usually, I. duplicatus colonizes the upper part of the trunk and large branches unlike Ips typographus which usually infests lower parts. However, under epidemic conditions, the part of the tree infested by I. duplicatus can be much larger and reach the middle and basal parts of the trunks.

After having excavated a nuptial chamber in the phloem, each male is joined by 1–5 females. The beetle produces a gallery system nearly identical to that of I. typographus but smaller (7-10 cm) and with maternal galleries. One female produces up to 60 offspring. The speed of brood development is similar to that of I. typographus (Schlyter et al., 1987). Development of one generation under Central European climatic conditions usually takes about 6-8 weeks I. duplicatus can co-occur with some other species of bark beetles, mainly I. typographus, I. amitinus and Pityogenes chalcographus, which can be competitors (Holuša et al., 2010).

Galleries are usually found in standing trees, less often on logs, and in the upper part of trees where the bark is relatively thin. Larger branches can also be used for reproduction. Each gallery has up to five longitudinal female egg galleries. Trees that are infested by I. duplicatus have discoloured crowns. The needles are lighter in colour and often fall to the ground. The frass can be found on the bark, on the basal part of the tree trunk. Woodpeckers, in search of larvae, often break off the bark of infested trees.

Beetles are 2.6-4.3 mm long, 2.3-2.5 times longer than wide; dark-brown, shiny and hairy, with four spines at each side of the elytral declivity. The second and third spines arise from a tumescence which forms an arcuate ridge between them. This is most distinct in the male where the third spine is the largest and is capitate (Balachowsky, 1949; Grüne, 1979; Douglas et al., 2019; CABI, 2021).

The eggs are whitish-grey, ovate and small (0.7 mm long).

The larvae and adults are similar in size, white, cylindrical and legless.

The pupae have many free segments (pupa libera). They are white and similar in size to the adults.

The symptoms of early infestations are not very evident. The standing infested trees die during the I. duplicatus colonisation, with an obvious discolouration of their crown, which becomes brown, and then grey after the needles have shed (EFSA, 2017). The frass on the bark surface and around the tree base is easy to find during periods of good weather. However, it disappears after rainfall. Another obvious symptom of infestation is bark that has been broken off by woodpeckers (CABI, 2021; EFSA, 2017).

I. duplicatus mostly attacks individual weakened standing trees in the stands. Attacked trees are often dispersed inside the stands and sometimes on the stand edges.

The nuptial chambers, maternal galleries on the infected dying trees are easy to find under the bark. The galleries of I. duplicatus are however very similar to those of Ips typographus (Balachowsky, 1949). The sapwood shows blue staining due to the fungi that are carried by the beetles.

Pheromone traps can also be used for detection.

Ips species identification is possible by using the illustrated dichotomous key and interactive LUCID keys developed by Douglas et al. (2019). Both include multiple routes to identification of one or both sexes of Ips species including I. duplicatus. Research is also being carried out on the use of molecular tests for I. duplicatus (Becker et al., 2021).

Studies carried out in laboratory conditions have shown that Ips spp. can fly continuously for several hours, but in nature, the flight distances are usually much shorter. It was found that the flight distance of a related species, Ips sexdentatus, is usually about 5 km, but some individuals can fly up to 45 km (Jactel & Gaillard, 1991). Nilssen (1978) reports that beetles have been found in the stomach of trout in lakes 35 km from the nearest spruce forest, probably carried by the wind. Spread over long distances can occur by transporting the pest under the bark of logs, as well as with plants for planting, isolated bark or wood chips.

Since the end of the last century, this beetle has become an invasive species in European spruce forests (Wermelinger et al., 2020; CABI, 2021). With the expansion of the range of I. duplicatus to the south, under certain conditions when it reaches 3 generations, it can become an economically important pest (Holuša et al., 2010).

In recent years, more frequent and hotter periods of drought have favoured the infestation of spruce trees by bark beetles (Mezei et al., 2017; Knížek & Liška, 2018). A significant increase in the distribution area and population density of I. duplicatus in recent years has been observed in the Czech Republic, Romania, Slovakia and Poland (Holuša et al., 2010; Olenici et al., 2009; Duduman et al., 2011; Knížek & Liška, 2018). In the northeastern part of the Czech Republic, I. duplicatus was involved in up to 80 % of spruce infestations (Holuša et al., 2010). It should be noted that in these countries I. duplicatus often colonizes younger trees with thinner bark, in contrast to I. typographus which usually prefers older trees (Duduman et al., 2011; Wermelinger et al., 2020).

The damage from I. duplicatus is difficult to assess because it is often found together with I. typographus (Grodzki, 2012; Duduman et al., 2011; Wermelinger et al., 2020).

According to Wermelinger et al. (2020), the challenge with northern bark beetle infestations is that its management is more complex than for I. typographus. Firstly, sanitation felling during winter is generally only effective against I. typographus, not against I. duplicatus, because the second generation of I. duplicatus leaves its brood trees in autumn to overwinter in the litter layer. Additionally, I. duplicatus infestations occurring in tree crowns are more difficult to detect. Because of this beetle’s faster larval development, the crowns often turn brown only after the beetles have already left the trees (Holuša et al., 2010; EFSA, 2017).

Control measures for I. duplicatus are similar to those for other bark beetles and include the use of pheromone traps for monitoring and mass trapping of the pest with trap trees.

I. duplicatus is absent in the islands of Great Britain, Ireland and Greece that are EU Protected Zones, and in these areas, the introduction of conifers (round wood; plants for planting, isolated bark) from countries where this pest is present is banned (EFSA, 2017).

Due to the expansion of the range to the western and southern territories, and also considering that the northern bark beetle can be a primary pest, some countries (Morocco, South Africa, Jordan, Turkey) included I. duplicatus in their quarantine lists (EFSA, 2017; EPPO, 2021a).

If I. duplicatus were always accompanied by I. typographus, it would be irrelevant for trees whether they are infested by I. typographus alone or by both bark beetle species; as they are bound to die in any case (Wermelinger et al., 2020). If, however, the northern bark beetle was able to colonize and eventually kill a substantial number of trees in its own right, this could lead to additional mortality in Norway spruce (Picea abies) or other conifers. Moreover, the northern bark beetle can also carry ophiostomatoid fungi: Ceratocystis polonica; Ophiostoma bicolor; O. penicillatum; O. piceae; O. piceaperdum; Ophiostoma sp.; Pesotum sp. It is considered that C. polonica is a particularly virulent pathogen (Kirisits, 2004).

If it is judged necessary to take phytosanitary measures against I. duplicatus, those taken against I. typographus and other Ips species would be effective (EPPO, 2021b). The following phytosanitary measures recommended by the EPPO Standard PM 8/2 (3) ‘Coniferae’ are considered to be effective against bark beetles. Plants for planting, cut branches (including cut Christmas trees), round wood or other parts of the host plants of I. duplicatus originating from the countries in which I. duplicatus is present should originate from a pest-free area. If not, the following phytosanitary measures are required to import round wood from the area where the pest is present: wood should be bark-free or heat-treated (EPPO, 2009a), or fumigated with appropriate fumigant, or treated with ionizing radiation (EPPO, 2009b). Harvesting wood residues, processing wood residues, hogwood and wood chips of the host should be produced from debarked or heat-treated wood. The heat treatment is also required for import of isolated bark. Wood packaging material should meet requirements of ISPM no. 15 (ISPM, 2018).

Becker M, König S & Hoppe B (2021) A simple PCR-based approach for rapid detection of Ips typographus and Ips duplicatus in the presence of (associated) symbionts and parasites. Journal of Plant Diseases and Protection 128(2), 527-534.

This datasheet was extensively revised in 2021 by Dr Oleg Kulinich (All-Russian Center for Plant Quarantine). His valuable contribution is gratefully acknowledged.

This datasheet was first published in 1997 in the second edition of 'Quarantine Pests for Europe', and revised in 2021. It is now maintained in an electronic format in the EPPO Global Database. The sections on 'Identity', ‘Hosts’, and 'Geographical distribution' are automatically updated from the database. For other sections, the date of last revision is indicated on the right.