Picea abies and Pinus sylvestris are the main hosts in the northern parts of Europe (P. abies is strongly preferred; Witrylak, 2008). Other species of Pinus, such as P. cembra and P. mugo may also serve as important hosts. Galleries have also been recorded on Abies alba and Larix decidua. 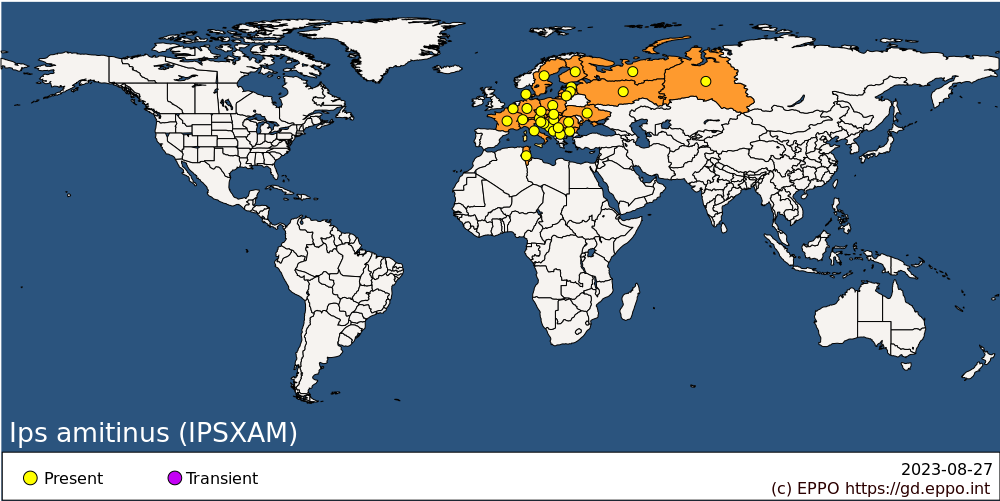 In western Europe, the flight starts in May-June. Males initiate galleries in weak or dying trees or in wind-felled trees and produce a pheromone consisting of ipsenol, ipsdienol and trans-2-methyl-6-methylene-3,7-octadien-2-ol (amitinol) (Francke et al., 1980). In most areas populations are univoltine. The new generation emerges and lay eggs in June-August depending on latitude and altitude. Sister broods may occur (that is, when parent beetles leave the tree after having successfully reproduced and form galleries, and lay new portion of eggs under the bark of another tree). A second generation can develop in lowland areas. Beetles hibernate in the decaying vegetation on the forest floor (the 'duff' layer). I. amitinus prefers trees with minimal shading or in direct sunlight with the following characteristics: over 40 years old, 21-30 cm diameter at breast height-, ≥15 m in height (Witrylak, 2008). The species readily infests trees which have been damaged or overturned by wind and/or snow as well as trees felled some time ago or standing dying trees which have been attacked by Armillaria root rot (Witrylak, 2008). I. amitinus is a polygamous species, and therefore the male attracts more than one female. It is noted that a complex of pathogenic ophiostomoid fungi (including Endoconidiophora polonica, Graphium ﬁmbriisporum, Ophiostoma bicolor, Ophiostoma brunneo-ciliatum and Ophiostoma penicillatum among others) is associated with I. amitinus (Kirisits, 2004; Repe et al., 2013, 2018; Kerchev et al., 2019).

This species prefers to breed in smaller-sized material, often in the upper part of weakened trees or trees infested and killed by I. typographus, Pityogenes chalcographus (L.), Pityophthorus pityographus (Ratz.), or Polygraphus polygraphus (L.) (EPPO/CABI, 1996; Witrylak, 2008). Galleries are formed by the beetles beneath the bark of the attacked tree. There are three to five (seldom up to seven) females in a family gallery. Females construct their own female-galleries or egg-galleries (as branches starting from the nuptial chamber) as a star shape spreading out from the central nuptial chamber (whereas I. typographus makes only two or three galleries). The arms tend to bend and become longitudinal, running in opposite directions (Chararas, 1962). Brood (=larval) galleries of I. amitinus were found in stem sections 2-27 cm in diameter, but sections 8-15 cm in diameter were most frequently colonized by this species. Sections with the 2-3 mm thick bark were preferred (Witrylak, 2008).

Laboratory experiments have shown that adult Ips spp. can fly continuously for several hours. In the field, however, flight has only been observed to take place over limited distances and then usually downwind. Beetles have been found in the stomach of trout in lakes 35 km from the nearest spruce forest, which were probably carried by the wind (Nilssen, 1978). Dispersal over longer distances depends on transportation under the bark of different wood commodities and wood packaging material.

I. amitinus is of limited significance as a pest in its own right. Compared with I. typographus, which shares several of the same hosts (EPPO/CABI, 1996), it is hardly mentioned in the scientific literature. However, because I. amitinus is often present together with I. typographus, it may contribute to the killing of trees during outbreaks of I. typographus or coincided outbreaks of both species. In 2019, an outbreak of I. amitinus (which started in 2017or 2018) was reported in Western Siberia (far from its natural range) where this species caused serious damage and finally killed stands of Pinus sibirica within two years (Kerchev et al., 2019).

Trap trees are suggested as a control tool against I. amitinus (Witrylak, 2008). Other control measures have not been reported as being used against this species. It should be kept in mind that accumulation of trees that were felled, damaged, or overthrown during winter and early spring, and failing to remove them from the forest before spring flight of I. amitinus can stimulate its intensive infestation because as well as the weakened standing trees I. amitinus readily infests trees/material lying on the ground (Witrylak, 2008).

I. amitinus was the only European Ips sp. considered as an A2 pest recommended for regulation as a quarantine pest by EPPO (OEPP/EPPO, 1981), but it was decided in 1996 to delete it from the A2 List, because of its relative unimportance and the fact that too few countries attach any importance to it. It is not a primary pest and is only capable of attacking trees already suffering stress, either environmental or from other pests (usually I. typographus). It should be mentioned, however, that several non-European Ips species are included in the EPPO A1 List of pests recommended for regulation as quarantine pests. I. amitinus is widespread through central Europe where Picea abies and Pinus sylvestris are present, and northward range expansion to Nordic countries was recently recorded (Økland et al., 2019). Heliovaara et al. (1991) attempted to analyse the environmental constraints limiting scolytines in Scandinavia, and concluded that I. amitinus was slowly spreading in Finland in relation to environmental change. No particular concern has been expressed about any risk arising from this spread. The recent outbreak in Western Siberia damaged valuable Pinus sibirica stands. The outbreak was considered to be caused by unintended introduction of the pest with transport or wood materials/commodities (Kerchev et al., 2019).

The islands of Great Britain and Ireland remain as areas which may face a certain risk from this pest, with respect to recently planted Picea stands. I. amitinus is unlikely to spread there by natural spread, so phytosanitary measures could be justified. However, it should be stressed that I. amitinus is a very much less important pest than I. typographus (EPPO/CABI, 1996), and so presents a much lesser risk than that species.

Countries in which I. amitinus is absent may require phytosanitary measures to be applied to the coniferous commodities imported from the areas where this pest is present. The following phytosanitary measures recommended by the EPPO Standard PM 8/2 (3) Coniferae are considered to be effective against bark beetles including I. amitinus. Plants for planting, cut branches (including cut Christmas trees), round wood or other parts of the host plants of I. amitinus originating from the countries in which I. amitinus is present should originate from a pest-free area. If not, the following phytosanitary measures are required to import round wood from the area where the pest is present: wood should be bark-free or heat-treated (EPPO, 2008a), or fumigated with appropriate fumigant, or treated with ionizing radiation (EPPO 2008b). Harvesting wood residues, processing wood residues, hogwood and wood chips of the host should be produced from debarked wood or heat-treated. The heat treatment is also required for import of isolated bark. Wood packaging materials should meet requirements of ISPM no. 15 (IPPC, 2019).

EPPO (2008b) Standard PM 10/8 Disinfestation of wood with ionizing radiation.

This datasheet was extensively revised in 2020 by Dr. D.L. Musolin. His valuable contribution is gratefully acknowledged.

This datasheet was first published in the EPPO Bulletin in 1981 and revised in the two editions of 'Quarantine Pests for Europe' in 1992 and 1997. It is now maintained in an electronic format in the EPPO Global Database. The sections on 'Identity', ‘Hosts’, and 'Geographical distribution' are automatically updated from the database. For other sections, the date of last revision is indicated on the right.