A. confertiflora is established and invasive in Israel (Dufour-Dror, 2012; see also Dufour-Dror & Yaacoby, 2013; Dufour-Dror, 2016; Dufour-Dror & Fragman-Sapir, 2018). A. confertiflora was first recorded in Israel near to the town of Zichron Yakov in 1990. A. confertiflora began to spread in the Shechem (Nablus) area in central Samaria during the mid-1990s. It is now widespread in Samaria (the northern part of the West Bank), especially along roads and in cultivated areas, but also in nature reserves such as Wadi Qana. The plant spread westwards and is now present in the Heffer Valley area (Sharon region), where 480 ha of riverbanks along the Alexander River are already heavily infested. The plant also spread eastward along Wadi Tirza and has reached the Northern Jordan Valley. Additional foci were recently discovered along the Yarkon River, on the Carmel Mount, in the Haifa region, in the southern part of the Yizre’el Valley in Lower Galilee, in the south near Gadera and in the Ashdod area (Israel Ministry of Environmental Protection, 2013).

Between the late 1990s and the early 2000s, a massive invasion began along the bank of the Alexander River, apparently originating from the area of Sechem (Nablus) in Central Samaria (West Bank). During the 2000s, a heavy infestation was recorded along the Wadi Tirza, flowing from the Sechem area to the east in the Jordan Valley. Since then new occurrences have been recorded along the Jordan Valley, in Lower Galilee (few sites) and in 2017 in the Negev Desert, south of Beer-Sheva.

In Australia, the species was introduced into Queensland in 1950 and is restricted to small colonies in the Western Darling Downs and the Burnett Pastoral District. In New South Wales, populations occur on the Far Western and North-Western Plains and on the Central Western Slopes, while in South Australia the species is only recorded in the surroundings of Adelaide (Parsons & Cuthbertson, 2001). There are very few records, and since Parsons & Cuthbertson (2001) the plant has been mentioned by Richardson et al. (2011), but apparently it does not spread vigorously in this region. 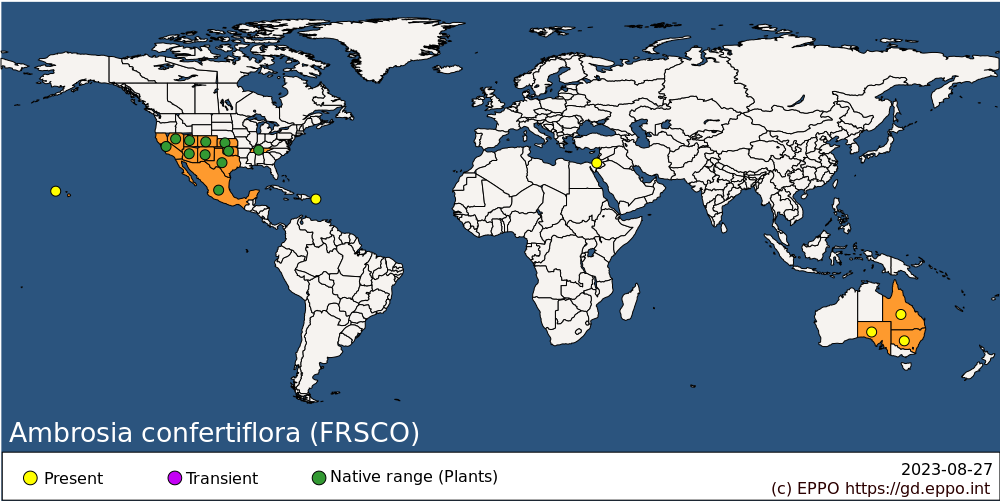 The leaves have short petioles and are bipinnate, divided into long lobes; their margins have sparse short hairs. The leaves are opposite at the base of the stem and alternate on the upper part of the plant. The leaves release a characteristic strong smell that may help to identify the plant. A. confertiflora is monoecious and has male and female yellow or greenish flowers. The male flowers are numerous and small (diameter about 1 cm) and are borne on erect clusters (Fig. 1). The female flowers lack petals and are concentrated in the leaf axils in a cup-shaped involucre. The fruit is a burr with 10–20 hooked spines and includes a single seed. The seeds are brown with a diameter of 3–4 mm. In Israel, the species blooms from September through to December.

Germination is best when seeds are on the soil surface (no germination was detected when seeds were planted at depths below 4 cm) and at moderate temperatures (Yair, 2017), suggesting autumn or spring germination. This is supported by Australian observations that this species germinates mostly in autumn (Parsons & Cuthbertson, 2001). It is recorded that in California (USA) A. confertiflora can tolerate a wide pH from 5.4 to 7.4 (Calflora, 2017).

In the native range (Arizona), Ambrosia confertiflora grows in dry or moist, rocky, sterile or fertile soils. It is abundant along city streets, highways, waste places and edges of cultivated fields, also on barren mesas and slopes in southern and central Arizona; it is less troublesome northward, except in local areas where colonies have become established (e.g. around Flagstaff); 300–2000 m elevation.

In Australia, the species is a weed in degraded pasture land and agricultural land, also occurring in open disturbed areas (Parsons & Cuthbertson, 2001).

The establishment of populations in the Jordan Valley, along roadsides, near Jericho and more recently in the Negev suggests that the plant can cope easily with arid conditions, i.e. high summer temperatures and an extended dry season. This is supported by the distribution of this species in its native range where it is most common in arid to semi-arid climates (Calflora, 2017; Flora of North America, 2017). However, it appears to have a wide environmental tolerance in its native range, occurring in temperatures from –1 to 35°C, precipitation levels from 230 to 1040 mm, elevations from 10 to 2000 m in regions where the growing season ranges from 5 to 12 months (Calflora, 2017; Flora of North America, 2017). In Israel, it is commonly associated with open habitats along rivers or in seasonally moist habitats (Yair, 2017). Growth trials have shown that the plant grows better in warm conditions (22/28°C and 28/34°C, night/day cycle) and shoot elongation is slower in cold conditions (10/16°C and 16/22°C, night/day cycle), and in these conditions the plant remains in a rosette form (Yair, 2017).

To date, within the EPPO region, there are no known socio-economic benefits derived from the plant species A. confertiflora. The species is not known to be available via the horticulture industry.

There is no clear information on how the species was introduced into Israel. It is also unknown how the species entered Australia. To date the species has not been intercepted along any pathway into the EPPO region. When compiling the pest risk analysis (PRA), the Expert Working Group considered the pathways listed below as the most feasible pathways for the entry of the species into the region based on experience with similar non-native plant occurrences (EPPO, 2018):

In Australia, there are no known studies that have assessed the impact of the species on biological diversity, but the species is regarded as suppressing pasture plants such as Chloris gayana (Rhodes grass) (Australian Government, 2017).

In Israel, A. confertiflora has been shown to have a significant impact on ecosystem services although a lot of the data for this is observational rather than from scientific studies. A. confertiflora is also a serious pest in cultivated fields, citrus groves and orchards in general and in vineyards (Israel Ministry of Environmental Protection, 2013). The plant competes for nutrients and can spread among cultivated fields and mixes with crops which cannot be harvested properly (Parsons & Cuthbertson, 2001). In particular, A. confertiflora has a major impact on organic farming as it cannot be effectively controlled by cultural and mechanical practices. It has caused notable damage to Moringa spp. fields in the Sharon region (J. M. Dufour-Dror, pers. comm. 2017). The burrs of the plant contaminate wool and can lower its value (Parsons & Cuthbertson, 2001).

Infestations in recreational sites may be problematic because of the unpleasant smell of the plant and mainly because of possible dermatitis and allergies it causes. In addition, monocultures can prevent access to sites and rivers. The plant also invades gardens and parks and is reported to disrupt their maintenance (J. M. Dufour-Dror, pers. comm. 2017).

As with the other Ambrosia species, A. confertiflora produces a large amount of pollen which is considered to be severely allergenic (Yair, 2017), causing hay fever and contact dermatitis in susceptible people (Parsons & Cuthbertson, 2001).

A. confertiflora is not effectively controlled by cultural practices. In fact, cultural practices can make the infestation worse by spreading pieces of the perennial root and stimulating development of root buds. Mechanical control can even exacerbate the intensity of the invasion, as the plant regenerates very quickly after mowing (J. M. Dufour-Dror, pers. comm. 2017). Uprooting may only be effective against very young plants, as otherwise the root remains in the soil and the plant regenerates.

In Israel, herbicides such as glyphosate, triclopyr and fluroxypyr are not very effective as the plant recovers quickly after the spraying (J. M. Dufour-Dror, pers. comm. 2017). In addition, these herbicides are not registered for use in wetlands and riparian habitats. A recent unpublished experiment in Israel suggests that imazapyr is effective in killing mature specimens of the burr ragweed (J. M. Dufour-Dror, pers. comm. 2017). However, herbicides have been recorded as providing satisfying results in controlling A. confertiflora in pastures in Australia.

At present, within the EPPO region there are regulations specific to A. confertiflora. A. confertiflora was included on the EPPO List of Invasive Alien Plants in 2014. In 2016, the species was prioritized (along with 36 additional species from the EPPO List of Invasive Alien Plants and a recent horizon scanning study) for PRA within the LIFE-funded project ‘Mitigating the threat of invasive alien plants to the EU through PRA to support the Regulation 1143/2014’. A. confertiflora was one of 16 species identified as having a high priority for PRA (Branquart et al., 2016; Tanner et al., 2017). A subsequent PRA concluded that A. confertiflora had a high phytosanitary risk to the endangered area (EPPO, 2018) and was added to the EPPO A2 List of pests recommended for regulation. At the time of publishing, A. confertiflora is being considered for inclusion on the list of (European) Union concern.

A. confertiflora is declared ‘Noxious’ in South Australia (proclaimed plant as Ambrosia spp.) (Natural Resources Management Act). In addition, in Australia, the species is a non-saleable weed.

Dufour-Dror JM (2016) Improving the prevention of alien plant invasion in the EPPO region: the need to focus on highly invasive plants with (still) limited distribution—examples from Israel. EPPO Bulletin 46(2), 341–347.

This datasheet was first published in the EPPO Bulletin in 2019 and is now maintained in an electronic format in the EPPO Global Database. The sections on 'Identity' and 'Geographical distribution' are automatically updated from the database. For other sections, the date of last revision is indicated on the right.