The flea beetle genus Epitrix is made up of 162 described species worldwide, the majority of which originate from the Neotropics. The Palearctic species of Epitrix were revised by Döberl (2000) and a key to Holarctic species is provided in Bienkowski & Orlova-Bienkowskaja (2017). Due to their small size, high diversity, and difficult to distinguish morphological characters, identification of Epitrix species including E. subcrinita can be difficult for non-experts and misidentifications may be present in published research.

As with most Epitrix, Epitrix subcrinita are primarily specialists on Solanaceae. Adults feed above ground on leaves while larvae feed on roots. Due to the subterranean habitat of the larvae most host records are based on adults feeding on foliage. Many of these records may be incidental as adult flea beetles are known to opportunistically feed on plants that they are not able to complete their lifecycle on (Clark et al., 2004). Under laboratory conditions Landis (1948) reported rearing E. subcrinita to adulthood on Capsicum frutescens, Solanum dulcamara, Solanum villosum, Solanum tuberosum, and a single larva was successfully reared on the non-solanaceous plant Cucurbita pepo.

E. subcrinita occurs throughout western North America including Canada, the United States, and Mexico. It is also reported from Guatemala and Peru, but due to the high diversity of species in the neotropics and the lack of any formal revisions these records should be treated with some caution until more taxonomic research is conducted. There are currently no known introduced populations of E. subcrinita. 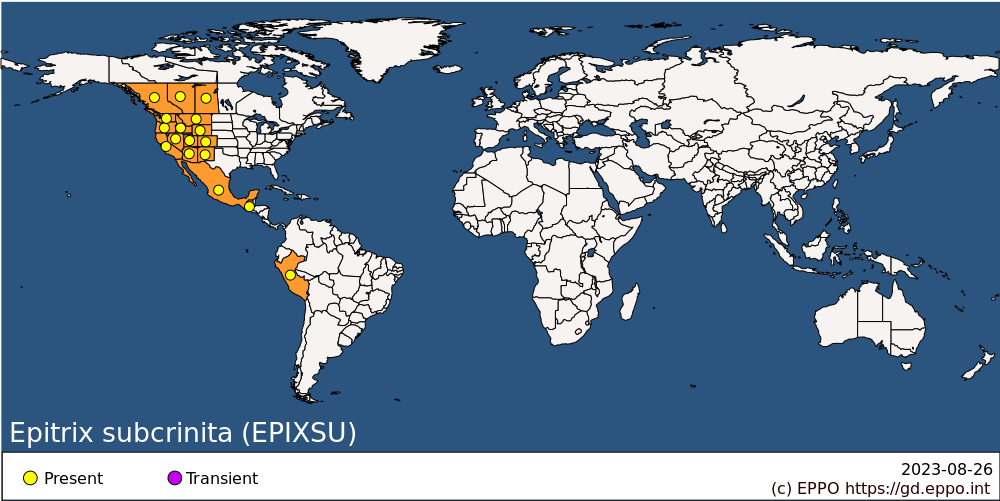 Adult E. subcrinita feed on leaves and produce ‘shot-hole’ symptoms while the larvae feed on roots and tubers. The Jones (1944) study is the most complete study of the biology of E. subcrinita. Under laboratory conditions the full life cycle of E. subcrinita was found to take an average of 49.2 days at approximately 21° C. In western Washington state they have two broods in July and September with the highest population in September. The beetles disperse by flying low to the ground on calm days mostly after noon.

Both larvae and adults have chewing mouthparts. The adults riddle the leaves with small circular holes (1.0-1.5 mm diameter) that produce the characteristic ‘shot-hole’ symptom in the potato foliage, which is common to all Epitrix species. The adult insects can be detected on the foliage and jump promptly when approached. On windy days, they are less active.

Tuber damage by E. subcrinita is generally regarded as lesser than that of E. tuberis based on some studies (e.g. Jones, 1944), but other research has found that they are capable of creating damage comparable to that of E. tuberis as described by Hoerner & Gillette (1928) (MacCarthy, 1950). Different types of tuber injury can be produced by the larval feeding. The larva may tunnel underneath the skin, producing winding superficial trails (‘worm-tracks’) or may feed outside, penetrating only partially into the potato, almost at a right angle to the surface (Hoerner & Gillette, 1928), originating a pit which mostly penetrates up to 3 mm but may reach 6 mm, and later becomes filled with dark corky material, described as ‘slivers’ (Gentner, 1944; Wallis, 1953; Morrison et al., 1967). ‘Slivers’ may show on the tuber’s surface as a black point, or a raised rugose elevation in the skin (‘pimples’). The ‘worm-track’ type of injury is the most easily recognizable. Rough skin, deep cracks and scab-like lesions are sometimes associated with the larval attack.

The genus Epitrix is a group of small flea beetles with uniform appearance which can be recognized by the presence of characteristic rows of setae on the elytra (Deczynski, 2016). The morphological identification to species is made by specialists, on the basis of the habitus and genitalia of the adult insects. The identification keys and illustrations presented in EPPO Standard PM 7/109 (2) (EPPO, 2017) allow E. subcrinita to be distinguished from the related potato species E. cucumeris, E. papa and E. tuberis. Out of these species E. subcrinita is distinctive due to its brown, brassy color.

The immature stages of E. subcrinita have not been formally described, but are similar in appearance to other Epitrix larvae such as E. cucumeris and E. tuberis.

The eggs are whitish, spherical and minute.

The larvae are whitish with a brown head, slender, cylindrical, and about 5 mm long.

The pupa is white and approximately 2.5 mm long.

The adults are small brassy dark brown beetles with rows of short white hairs across the elytra, 1.76-2.27 mm long, with testaceous antennae. The hind femurs are enlarged, adapted to jumping.

Detection is made by visual inspection of the foliage of potato or other host plants, looking for shot-hole symptoms and adult flea beetles. On potato, the tubers are inspected visually for symptoms of larval injury (EFSA, 2019). The ‘worm-track’ type of injury is the most easily recognizable. The ‘slivers’ are best detected if the potato tubers are peeled with a knife.

The identification of the species requires the collection of insect specimens for analysis. Adult specimens may be collected with a sweep-net or with a mouth aspirator. The larvae are very difficult to detect and collect because of their small size and translucent color, and also because of their feeding behavior. When present at potato harvest, the larvae may be hidden inside the ‘worm tracks’, or may expose the terminal part of the abdomen protruding outside the tuber, while feeding.

The identification of all E. subcrinita stages can be made reliably by non-specialists, using molecular methods (DNA barcoding on cytochrome c oxidase subunit I (COI) gene) (EPPO, 2016a; Germain et al., 2013; Mouttet et al., 2016). The reference sequences of these species are available in EPPO-Q-bank and BOLD databases.

Adult E. subcrinita can fly, and this is one of the main means for local dispersal of the species (Jones, 1944). Additionally, some hosts of E. subcrinita can be common weeds in disturbed areas such as Solanum nigrum and S. dulcamara. Populations on these hosts can serve as reservoirs to infest agricultural areas, and due to the close proximity of these weeds to human dwellings their spread may be aided by human transport and corridors of host plants such as roadside weeds.

The main pathway for long distance spread is through the commercial transport of potato tubers (seed or ware potatoes), when associated with soil and plant debris (EPPO, 2016b; 2017).

When potatoes are harvested in an infested field, adults, pupae and larvae of E. subcrinita may be present in the stubble, soil, and tubers. Adult beetles may be carried passively on the surface of potatoes, or with the soil adhering to potato tubers. This possibility would be higher in exports of seed potatoes, because potatoes are not washed.

The soil of host plants for planting could also contain and spread immature stages of the pest (EPPO, 2011).

The amount of damage caused by E. subcrinita to potato tubers has been debated due to conflicting results. The tuber flea beetle E. tuberis which often co-occurs with E. subcrinita is known to make tunnels in the tubers which can reduce the value of the crops. Some research has indicated that this damage is associated with E. tuberis and weak or absent when only E. subcrinita is present (Webster 1932, Jones 1944, Fulton & Branham 1960). However, under laboratory conditions MacCarthy (1960) found that E. subcrinita produced tuber damage comparable to that of E. tuberis.

The reduction of the leaf area by adult feeding should have a minor impact on yield losses, because it is compensated by the fast growth of the potato plants, as demonstrated experimentally by Senanayake et al. (1993) for E. cucumeris. However, young plants grown after the emergence of the beetles can be killed by high populations with significant feeding (Webster & Baker, 1929).

Contemporary methods of control for E. subcrinita have not been studied due to its minor status as a pest in North America compared to the more destructive E. tuberis. Methods of control used for E. tuberis and other Epitrix species, such as IPM strategies combining cultural measures for reducing the population of overwintered adults with insecticide treatments, may work for E. subcrinita as well. E. subcrinita tend to overwinter in vegetative litter while E. tuberis mainly overwinters in the soil, so destruction of litter may also help to reduce winter survival (Davis and Landis, 1947).

The present distribution of E. subcrinita in North America indicates that the species would find suitable climatic conditions in the EPPO region.

It is difficult to predict the potential economic impact of E. subcrinita due to the uncertainty of how much tuber damage they will cause in the field. If their damage is minimal then their impact would be comparable to that of Epitrix cucumeris, but if they exhibit tuber tunnelling behaviours then their impacts would be closer to E. tuberis. Since there are no known introduced populations of E. subcrinita it is uncertain how they would behave in a novel environment.

One could expect E. subcrinita to develop one or two generations per year in many of the potato-growing areas of Central and Northern Europe (EPPO, 2011), and possibly also in southern regions. While E. subcrinita could be controlled chemically, its presence could lead to a generalized use of insecticides on potato, rather than the occasionally targeted use against Leptinotarsa decemlineata, as at present in most EPPO countries. The problem would arise even more acutely in countries where L. decemlineata has not been introduced (EPPO, 2011). Furthermore, the control of E. subcrinita would be critical in several EPPO countries, namely in a majority of the EU countries where insecticides used in North America are no longer authorized.

The import of seed potatoes from third countries is prohibited in several EPPO member countries, namely in the EU (EU, 2016), but sometimes authorized under derogation procedures, e.g. from Canada into the EU (EU, 2003).

Following the accidental introduction of the species E. papa and E. cucumeris in Portugal and Spain, E. subcrinita is subject, together with E. cucumeris, E. papa, and E. tuberis, to measures by several EPPO member countries to prevent their introduction and spread within the EPPO region.

Additional requirements are recommended for soil or growing medium attached to rooted host plants from countries where E. subcrinita occurs (removal of soil and growing media, or production in a pest free area, or in a pest-free place under protected conditions, or production under screened greenhouse conditions with appropriate monitoring in the framework of a bilateral agreement) (EPPO, 2011).

EUof the European Parliament and the Council of 26 October 2016 on protective measures against pests of plants. Official Journal of the European Union L317/4.

Gentner LG (1944) The black flea beetles of the genus Epitrix identified as cucumeris. Proceedings of the Entomological Society of Washington 46, 137-149.

This datasheet was prepared in 2020 by Anthony Deczynski. His valuable contribution is gratefully acknowledged.

This datasheet was first published online in 2020. It is maintained in an electronic format in the EPPO Global Database. The sections on 'Identity', ‘Hosts’, and 'Geographical distribution' are automatically updated from the database. For other sections, the date of last revision is indicated on the right.