Bactrocera zonata is a polyphagous species reported from a large range of commercial and wild hosts (Allwood et al., 1999). The range of B. zonata in Africa, where it was introduced, is much more restricted than in its native area but includes a number of commercially important fruits. The USDA Compendium of Fruit Fly Host Information (CoFFHI) (Culliney et al., 2017) provides an extensive host list with detailed references.

Bactrocera zonata is an Asian species widespread on the Indian subcontinent and into Southeast Asia. It is also widely distributed in the Middle East (Iran, Iraq) and on the Arabian Peninsula. It was introduced to Africa where it is currently limited to Egypt, Libya and Sudan in the northeast of mainland Africa, as well as on the islands of Mauritius and Reunion in the Western Indian Ocean. The occurrence in Israel is in isolated areas. 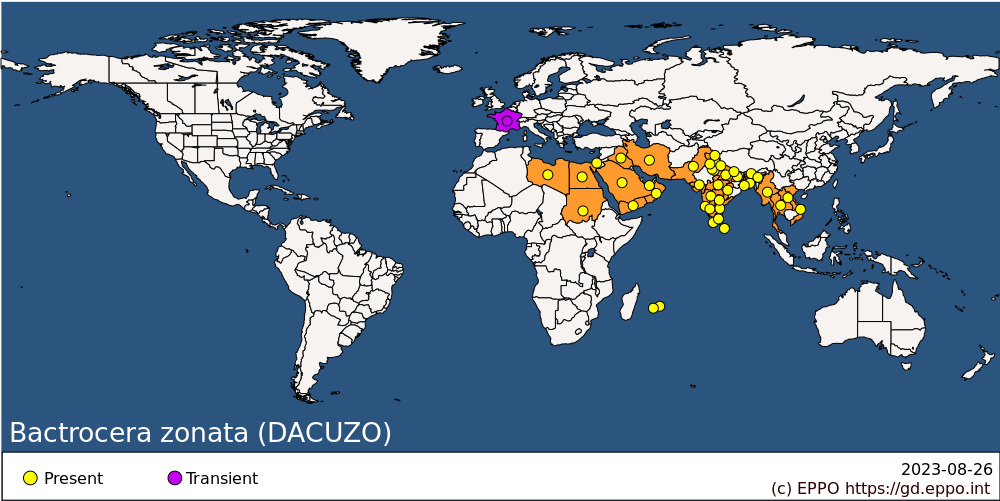 The general life cycle is similar to those of other Bactrocera species infesting fruits: eggs are laid below the skin of the host fruit. Three larval stages develop inside the fruit, feeding on the plant tissue. Once mature the third instar larva will leave the fruit, dig down into the soil and turn into a pupa enclosed in a puparium. The adult fly will emerge from the puparium. Based on experiments conducted in La Réunion Bactrocera zonata can complete its life cycle in about 61 days at 25°C (Duyck et al., 2007). Females start laying eggs in fruit between 2 and 3 weeks after adult emergence. The maximum number of eggs laid per day by one female is 13 (Duyck et al., 2007). The total number of eggs laid in a lifetime of a female was calculated to be 303 (Duyck et al., 2007). The total duration of the larval stages varies from 4 to 30 days at 35°C and 15°C respectively (Duyck et al., 2004). According to Qureshi et al. (1993) the immature stages cannot develop at temperatures below 15°C. Once mature the third instar larvae burrow into the soil where they pupate. In areas where winter conditions occur, the winter is passed in the pupal stage according to Rahman et al. (1993). The pupal development takes 8 and 53 days, at 35°C and 15°C respectively (Duyck et al., 2004). Females of B. zonata can live for up to 18 weeks.

Fruit fly larvae in general have a typical shape, i.e., cylindrical maggot-shape, elongate, anterior end narrowed and somewhat recurved ventrally, with anterior mouth hooks, and flattened caudal end. Their length varies from 5 to 15 mm. The 3rd-instar larva has been described by Carroll et al. (2004). White & Elson-Harris (1992) provide a key to 3rd-instar larvae which is useful for an identification to genus level. A key to this and other tephritids for the 3rd-instar larvae is available in Balmès & Mouttet (2017).

Adult (after diagnostic description given by Drew & Romig (2013) with additional character states by White, 2006)

A diagnostic protocol for this species has been published by EPPO (2013).

DNA barcoding may be used for the molecular identification of B. zonata, however, it should be noted the Barcoding Index Number Systems (BINs) in which this species is represented, also include a few unidentified / possibly misidentified reference sequences. Sequences are available in the Barcode of Life Data Systems (BOLD) and in EPPO-Q-Bank.

Males are attracted to methyl eugenol. Both sexes can be monitored by traps baited with protein-based attractants. An EPPO Standard PM 9/011 (1) Bactrocera zonata: procedure for official control includes details on trapping (EPPO, 2010). Detection is also possible by examination of fruit for oviposition punctures and then rearing the larvae through to the adult stage.

Transport of infested fruits is the main means of movement and dispersal to previously uninfested areas. The natural dispersal ability of B. zonata is unclear. Qureshi et al. (1975) report records of up to 40 km of spread by individual flies in experiments with sterile males. This seems to be the maximum and possibly a rare occurrence as Hicks et al. (2019) recently published a review stating that long distance dispersal (50-100 km) for several Bactrocera species is largely based on erroneous citations. Dispersal up to 2 km is considered more typical.

B. zonata is polyphagous, but is particularly a pest of peach, mango and guava. The impact of B. zonata appears to be variable according to the region and presence or absence of other polyphagous species. In Egypt, losses can be substantial, especially on mangoes, citrus and peaches reaching levels of 20% (Cayol et al., 2002; Saafan et al., 2005). In Pakistan and northern parts of India B. zonata is considered more important than Bactrocera dorsalis (Qureshi et al., 1991; Kapoor, 1993) causing major losses in peach, apricot, guava and figs; while in Sri Lanka it does not seem to be an important pest (Tsuruta et al., 1997). Siddiqui et al. (2003) reports damage up to 50% to guava in Pakistan.

In countries where the pest is present, it was reported that B. zonata could outcompete other tephritid fruit fly species such as Ceratitis capitata (Duyck et al., 2007).

Management for this species includes the general control measures for Bactrocera spp. (see Vargas et al. 2015 for an overview of management options). These include sanitation (to gather all fallen and infested host fruits and destroy them). Insecticidal protection is possible by using a cover spray or a bait spray. Bait sprays work on the principle that both male and female tephritids are strongly attracted to a protein source from which ammonia emanates. Bait sprays have the advantage over cover sprays in that they can be applied as a spot treatment so that the flies are attracted to the insecticide and there is minimal impact on natural enemies and other beneficials. Singh & Sharma (2016) report on the positive impact of such an integrated pest management (IPM) program (including ploughing, sanitation, bait sprays and male annihilation technique) against B. zonata (together with B. dorsalis) on Kinnow Mandarin (Citrus deliciosa) in Punjab (India).

Bactrocera zonata is a known pest of several commercial fruit crops in the area where it is present. It can be moved in trade with infested fruit. With the isolated occurrences in Israel, B. zonata is already present in the EPPO region. EFSA analyzed the distribution models published for B. zonata and concluded that several southern parts of the EPPO region, around the Mediterranean are climatically suitable for potential establishment (Baker et al., 2019). Transient populations could also have impacts on export of host fruit from the EPPO region.  EFSA compiled a pest report to support the ranking of Bactrocera zonata as a priority pest for the EU (Baker et al., 2019).

This datasheet was extensively revised in 2021 by Dr M. De Meyer. His valuable contribution is gratefully acknowledged.

This datasheet was first published in the EPPO Bulletin in 1983 and revised in the two editions of 'Quarantine Pests for Europe' in 1992 and 1997, as well as in 2005 and 2021. It is now maintained in an electronic format in the EPPO Global Database. The sections on 'Identity', ‘Hosts’, and 'Geographical distribution' are automatically updated from the database. For other sections, the date of last revision is indicated on the right.