Bactrocera parvula was considered synonymous of B. latifrons, but re-instated as a valid species by Drew & Romig (2013).

Bactrocera latifrons predominantly infests Solanaceae and is considered a major pest of Capsicum and Solanum species (Drew & Romig, 2013). In addition, it is reported from a various number of other plant families.  The USDA Compendium of Fruit Fly Host Information (CoFFHI) (McQuate & Liquido 2016) provides an extensive host list with detailed references.

Bactrocera latifrons is an Asian species widespread from the Indian subcontinent across Southeast Asia (Drew & Romig, 2013). However, because of the re-instatement of B. parvula as a distinct species (see Drew & Romig, 2013) the presence in Taiwan needs to be re-assessed. In recent surveys (Doorenweerd et al., 2019), B. latifrons was not detected in Taiwan.

B. latifrons was introduced into Hawaii, with a first detection in 1983 (Vargas & Nishida, 1985). It was introduced into Africa, with a first report in Tanzania in 2006 (Mwatawala et al., 2007). Records so far show only a limited spread in Africa with records from Burundi, Kenya, and Tanzania. B. latifrons was recorded from Yonaguni (Okinawa Prefecture, Ryukyu Islands) in Japan. Eradication programs were conducted in this area of Japan, and the species was declared eradicated in 2011 (Fukugasako & Okamoto, 2012). However, since 2010 B. latifrons has been detected on several of the other Ryukyu Islands and again in Yonaguni in 2018 (Taniguchi et al., 2018). 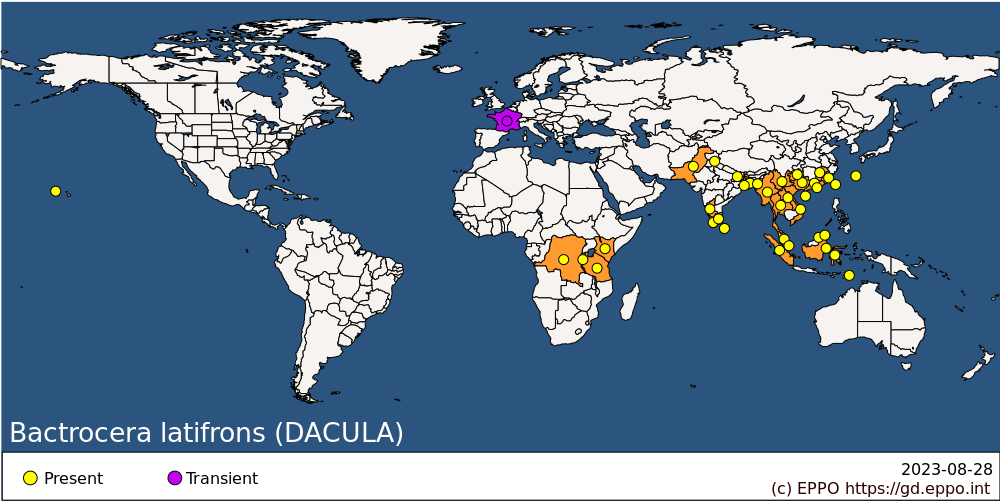 The general life cycle is similar to those of other Bactrocera species infesting fruits: eggs are laid below the skin of the host fruit. Three larval stages develop inside the fruit, feeding on the plant tissue. Once mature the third instar larva will leave the fruit, dig down into the soil and turn into a pupa enclosed in a puparium. The adult fly will emerge from the puparium. Bactrocera latifrons can complete its life cycle in about 21-24 days (Vargas & Nishida, 1985a; Srikachar et al., 2010), with egg incubation taking about 2-3 days, while larval stage lasts about 8-10 days. Duration of the pupal stage is about 10-14 days. Longevity records vary: Vargas et al. (1997) report that adult female longevity can vary between 15 to 80 days depending on the temperature, while Srikachar et al. (2010) give an average longevity 131 to 148 days for male and female specimens respectively. Vargas et al. (1996) indicate that reproduction is suppressed at 16°C and larval survival rate at that temperature was limited to 2.6%. Takano (2014) showed that an extended period at 8°C kills the majority of the flies (95% mortality after 13 days). Shimizu et al. (2007) suggest that B. latifrons can overwinter as an adult in areas where winter conditions occur.

Fruit fly larvae in general have a typical shape, i.e., cylindrical maggot-shape, elongate, anterior end narrowed and somewhat recurved ventrally, with anterior mouth hooks, and flattened caudal end. Their length varies from 5 to 15 mm. Identification to species level is not possible based on larvae. The 3rd-instar larvae have been described by White & Elson-Harris (1992) and Carroll et al. (2004). The former work provides a key to 3rd-instar larvae which is useful for an identification to genus level. in addition, a key to this and other tephritids for the 3rd-instar larvae is available in Balmès & Mouttet (2017) and White & Elson-Harris (1992).

Adult (after diagnostic description given by Drew & Romig, 2013. Additional character states after White, 2006)

Remark: a diagnostic protocol for this species has been published by EPPO (2020).

DNA barcoding may be used for the molecular identification of B. latifrons, however the Barcoding Index Number Systems (BINs) in which this species is represented, also include a few unidentified / possibly misidentified reference sequences. However, at present no DNA barcodes are available for the closely related species B. parvula. Sequences are available in the Barcode of Life Data Systems (BOLD) and EPPO-Q-Bank.

Male specimens can be attracted by latilure (α-ionol) enhanced with cade oil (McQuate et al., 2004). However, experiments in Tanzania using this lure were not very successful (Mziray et al., 2010). In recent years several 3-oxygenated α-ionone analogs and other related compounds were isolated and shown to act as a stronger attractant than latilure (Nishida & Tan, 2016). Both sexes can be monitored by traps baited with protein-based attractants. Detection is also possible by examination of fruit for oviposition punctures and then rearing the larvae through to the adult stage.

Transport of infested fruits is the main means of movement and dispersal to previously uninfested areas. Adult flight can also result in dispersal but previous citations of long (50-100 km) dispersal movements for Bactrocera spp. are unsubstantiated according to a recent review by Hicks et al. (2019). Dispersal up to 2 km is considered more typical.

Bactrocera latifrons is mainly a pest species of solanaceous crops. While in some places the economic damage appears to be limited (e.g. McQuate et al., 2004), sometimes high infestation rates are recorded. For example, Vijaysegaran & Osman (1991) report 60-80% infestation of chilies in Malaysia.

Management for this species includes the general control measures for Bactrocera spp. (see Vargas et al. 2015 for an overview of management options). These include sanitation (to gather all fallen and infested host fruits and destroy them). Insecticidal protection is possible by using a cover spray or a bait spray. Bait sprays work on the principle that both male and female tephritids are strongly attracted to a protein source from which ammonia emanates. Bait sprays have the advantage over cover sprays in that they can be applied as a spot treatment so that the flies are attracted to the insecticide and there is minimal impact on natural enemies and other beneficials.

SIT (Sterile Insect Technique) application specifically for this species was used, in combination with other control methods (bait spraying, host plant removal) at Yonaguni Island (Japan) and resulted in eradication (Fukugasako & Okamoto, 2012. But see above under Geographical distribution).

Bactrocera latifrons is a known pest of several commercial fruit crops in the area where it is present. It can be moved in trade with infested fruit. No detailed study has been made on climatic suitability of the EPPO region for this species; there is only a CLIMEX based predictive model of this species in China (Ma et al., 2012). This model indicates that the projected distribution in this country is below 33.442°N. Vargas et al. (1996) indicated that B. latifrons is adapted to a relative narrower range of temperatures compared to other fruit fly species in Hawaii. This and the reduced larval and adult survival rates at lower temperature (see above, under biology) may give indications that the major part of the EPPO region is largely unsuitable for permanent establishment of B. latifrons. However, even transient populations could have impacts on export of host fruit from the EPPO region.  The EFSA Panel on Plant Health, in their Pest Categorization of non-EU Tephritidae (EFSA, 2020) placed B. latifrons on the list of fruit flies that satisfy the criteria to be regarded as a potential Union quarantine pest for the EU.

This datasheet was prepared in 2021 by Dr M. De Meyer. His valuable contribution is gratefully acknowledged.

This datasheet was first published online in 2021. It is maintained in an electronic format in the EPPO Global Database. The sections on 'Identity', ‘Hosts’, and 'Geographical distribution' are automatically updated from the database. For other sections, the date of last revision is indicated on the right.