B. minax has erroneously been considered synonymous with B. tsuneonis (EPPO/CABI, 1996).

B. minax is found exclusively on Rutaceae, such as Citrus and Fortunella. Xia et al. (2018) reports that in China most surveys indicate that mainly sweet oranges are heavily infested, although some surveys have shown high infestation occasionally in pomelo and sour oranges. In Bhutan mandarins are heavily infested (Dorji et al., 2006). The USDA Compendium of Fruit Fly Host Information (CoFFHI) (Chang et al., 2018) provides an extensive host list with detailed references.

The known distribution of B. minax is restricted to northeastern India, Bhutan, Nepal, and southern China. The record from Donghai County in Jiangsu, China is uncertain according to Hancock & Drew (2018). 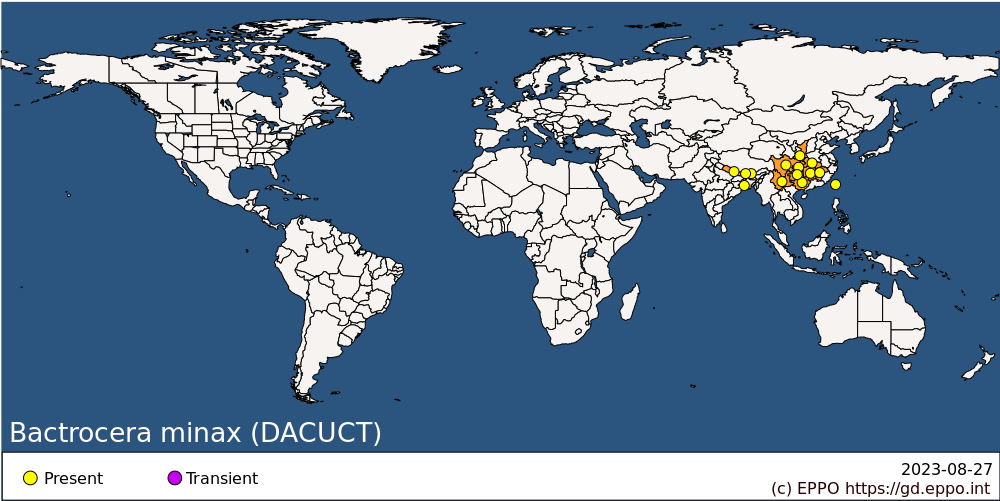 Bactrocera minax is an univoltine species (only one generation each year) and goes into diapause in the soil as a pupa during winter (Dong et al., 2013). The overwintering stage lasts about 160-170 days (Fan et al., 1994) and a period of at least three months of winter conditions is required for successful diapause development and termination (Dong et al., 2013). Diapause termination is synchronized with fruit development, with adult emergence between April and May and adult life span between one and three months (Xia et al., 2018). Oviposition takes place in June-July (Dorji et al., 2006), and eggs are laid below the skin of young host fruits. Three larval stages develop inside the fruit, feeding on the plant tissue. A review on this species in China is given by Xia et al. (2018), while details of development in mandarin in Bhutan is given by Dorji et al. (2006). Additional information is given in Zhang (1989), Fan et al. (1994), and Dong et al. (2013). In general, B. minax has a similar biology to B. tsuneonis but adults of B. tsuneonis can be found over a longer time in the field.

Fruit fly larvae in general have a typical shape, i.e., cylindrical maggot-shape, elongate, anterior end narrowed and somewhat recurved ventrally, with anterior mouth hooks, and flattened caudal end. Their length varies from 5 to 15 mm. Identification to species level is not possible based on larvae. A key for the 3rd-instar larvae is available in White & Elson- Harris (1992) and is useful for an identification to the genus level. The larva of B. minax is also described in some detail by White & Elson-Harris (1992).

Abdomen. Elongate oval and petiolate; terga free; pecten present on tergum III. Tergum I and sterna I and II longer than wide. Terga I and II fulvous with narrow fuscous to dark fuscous lateral margins and a broad medial longitudinal dark fuscous band that is diffuse on the lateral margins; terga III-V variable from fulvous to red-brown and with a dark fuscous to black ‘T’ pattern consisting of a broad transverse band across anterior margin of tergum III which widens to cover lateral margins and a narrow medial longitudinal band over all three terga but ending before posterior margin of tergum III, fuscous to dark fuscous anterolateral corners on terga IV and V (in some specimens the dark patterns on terga III-V are paler and reduced to a fuscous medial longitudinal band over all three terga and pale fuscous anterolateral corners on terga IV and V). A pair of oval fulvous to red-brown shining spots on tergum V. Posterior lobe of surstylus short, sternum V with a slight concavity on posterior margin. Abdominal sterna variable from red-brown to fuscous.

B. minax is morphologically similar to B. tsuneonis (Drew & Romig, 2013), but lacking anterior supra-alar setae. It has an incomplete lateral yellow band between the postpronotal lobe and the notopleuron and the female has a longer ovipositor (aculeus 3.7-5.0 mm long), with a needle-shaped apex.  Full details of the separation of these species were given by White & Wang (1992) and Drew & Romig (2013). Hancock & Drew (2019) provide an identification key for all representatives of the subgenus Tetradacus.

Though most Bactrocera spp. can be monitored by traps baited with male lures, B. minax is not known to be attracted to any male lure. A weak attraction of both sexes to methyl eugenol was reported by Drew et al. (2007). However, this appears to be a seasonal effect, related to the fly’s sexual maturation and mating (Royer, 2015) and considered incidental by Hancock & Drew (2018). Both sexes can be monitored by traps baited with protein-based attractants (Xia et al., 2018). Chen et al. (2017) report the use of fruit mimic traps as effective in monitoring of B. minax. Detection is also possible by examination of fruit for oviposition punctures and then rearing the larvae through to the adult stage.

Transport of infested fruits is the main mean of movement and dispersal to previously uninfested areas. Adult flight can also result in dispersal but previous citations of long (50-100 km) dispersal movements for Bactrocera spp. are unsubstantiated according to a recent review by Hicks et al. (2019). Dispersal up to 2 km is considered more typical.

B. minax is stenophagous, only attacking citrus fruits. It is a serious pest of citrus in parts of China (Zhang, 1989) but the severity and economic impact can differ among the different regions (Xia et al., 2018).

Management for this species includes the general control measures for Bactrocera spp. (see Vargas et al. 2015 for an overview of management options). Specific Integrated Pest Management (IPM) and other management options applied in Bhutan and China are reviewed respectively in Dorji et al. (2006) and Xia et al. (2018). These include sanitation (to gather all fallen and infested host fruits, and destroy them), and raking or shallow plowing of the soil during winter (to expose the pupae). Insecticidal protection is possible by using a cover spray or a bait spray. Bait sprays work on the principle that both male and female tephritids are strongly attracted to a protein source from which ammonia emanates. Bait sprays have the advantage over cover sprays in that they can be applied as a spot treatment so that the flies are attracted to the insecticide and there is minimal impact on natural enemies and beneficials. Xia et al. (2018) give a review of comparative testing of different food-based lures against B. minax. Area-wide control, using protein bait spraying, was recently conducted in Nepal (Adhikari et al., 2020). Wang & Luo (1995) report the use of Sterile Insect Technique (SIT ) on orange crops in Guizhou Province, China in 1993 and 1994 resulting in a reduction from over 5% infestation to about 0.1% by releasing 1 million sterile males (obtained from natural populations). For more details on this and other SIT applications in China, see Xia et al. (2018). The main current drawback for mass rearing of B. minax for SIT is the obligatory diapause.

Citrus species are important crops in the EPPO region. B. minax is a known pest of Citrus in the area where it is present. It can be moved in trade with infested fruit. Although no detailed study was made on climatic suitability of the EPPO region for this species, B. minax is known to occur in temperate areas. Transient populations could also have negative impacts on export of host fruit from the EPPO region. The EFSA Panel on Plant Health, in their Pest Categorization of non-EU Tephritidae (Bragard et al. 2020) placed B. minax on the list of fruit flies that satisfy the criteria to be regarded as a potential Union quarantine pest for the EU.

Consignments of fruits of Citrus and Fortunella from countries where B. minax occurs should be inspected for symptoms of infestation and those suspected should be cut open in order to look for larvae. Possible measures include that such fruits should come from an area where B. minax does not occur, or from a place of production found free from the pest by regular inspections in the 3 months before harvest.

In China both irradiation and cold treatment have been explored as phytosanitary measures. Irradiation required 50-90 Gy to reach zero adult emergence (Gao et al., 1999; Zhao et al., 1995). No specific treatment schedules for cold treatment have been developed but given the cold tolerance of B. minax it is uncertain if schedules for other fruit flies (such as Ceratitis capitata) will be adequate.

Plants of citrus transported with roots from countries where B. minax occurs should be free from soil, or the soil should be treated against puparia. The plants should not be bearing fruits. Citrus plants are in any case prohibited from importation in many countries because of other quarantine pests.

This datasheet was extensively revised in 2020 by Dr M. de Meyer. His valuable contribution is gratefully acknowledged.

This datasheet was first published in 1992 in 'Quarantine Pests for Europe' as Bactrocera spp. (non-European), then as 'Bactrocera minax' in the second edition of the book in 1997, and revised in 2020. It is now maintained in an electronic format in the EPPO Global Database. The sections on 'Identity', ‘Hosts’, and 'Geographical distribution' are automatically updated from the database. For other sections, the date of last revision is indicated on the right.