CRLV is a type member of the genus Cheravirus. This genus Cheravirus contains viruses that were previously classified as tentative members of the genus Nepovirus. In common with nepoviruses, the members of the genus Cheravirus are characterised by their bipartite genome encapsidated in icosahedral particles with each genome segment producing a polyprotein. However, unlike nepoviruses, these viruses contain three distinct coat protein subunits of a fairly similar size (20-25 kDa) and phylogenetic analyses suggest, that the cheraviruses should be classified in a distinct genus within the plant picornavirus family Secoviridae  (Sanfaçon et al., 2012).

It has been shown that Cherry rasp leaf virus and Flat apple disease-associated virus (FAV) are isolates of the same virus (James et al., 2001).

The main hosts of CRLV are sweet cherry (Prunus avium), peach (P. persica), and susceptible cherry rootstocks include both mazzard (P. avium) and mahaleb (P. mahaleb) (Wagnon et al., 1968; Stace-Smith and Hansen, 1976). The reports about CRLV occurring in sour cherry (P. cerasus) are based only on symptomatology and need to be confirmed.

CRLV has also been found in apple (Malus domestica), in which it causes 'flat apple' disease (Parish, 1976, 1977, Hansen and Parish, 1990). There are only two reports on the detection of CRLV using ELISA in asymptomatic raspberry plants (Rubus idaeus), but these were not confirmed by molecular genetic methods (Jones et al., 1985; Stace-Smith and Ramsdell, 1987). CRLV was also detected on potatoes (Solanum tuberosum) in Wisconsin (Thompson et al., 2004, Osman , 2017 ), Sambucus nigra subsp. caerulea and Malva spp. in Washington State (Villamor and Eastwell, 2016), and on tomato (Solanum lycopersicum) in Minnesota (Bratsch et al., 2020),  but the status of these hosts remains unclear.

CRLV was first found in 1935 in Colorado, USA (Bodine and Newton, 1942). The virus is native to western North America where it is present over a wide geographic area. The virus is present primarily in the foothills west of the Rocky Mountains from Colorado, Utah and California, and north to southern British Columbia (Stace-Smith and Hansen, 1976).

In there were many reports on the detection of the CRLV on cherry plants in other parts of the world, based on the presence of rasp-leaf symptoms. But later, it was established, that leaf enation symptoms in cherry in both Europe and North America can also be caused by viruses other than CRLV, such as strains of Prunus necrotic ringspot virus or Tomato ringspot virus (Nyland, 1976). European cherry rasp leaf (Pfeffinger disease) is caused by a combination of Prune dwarf virus with either Raspberry ringspot virus or Arabis mosaic virus (Nyland, 1976). Cherry leaf roll virus has also been found to be associated with mild leaf enations in some cherry varieties (Wagnon et al., 1968). As a result, in the absence of definitive diagnostic testing, reports of CRLV in cherry outside of the known CRLV-infested areas of western North America should be considered as unconfirmed. 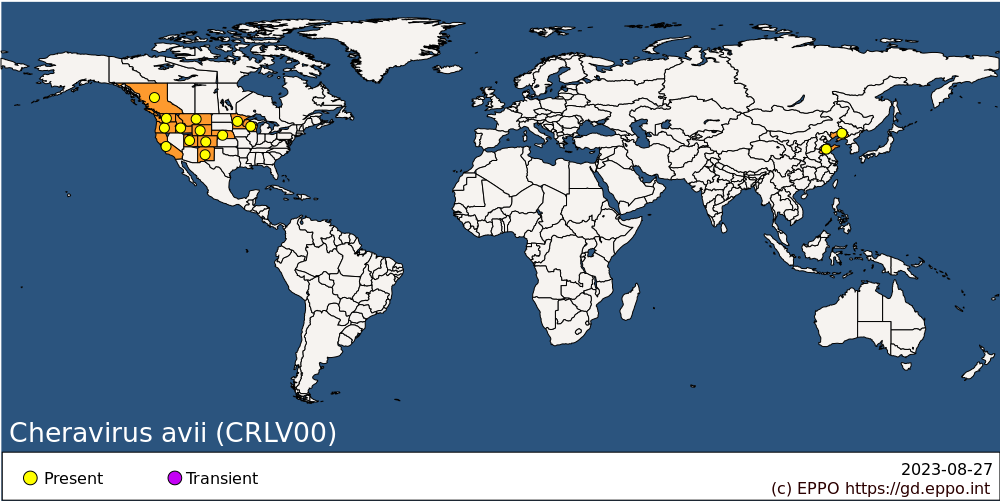 CRLV is transmitted by the dagger nematodes Xiphinema americanum sensu stricto, X. californicum and X. rivesi (Brown et al., 1992, 1993, 1994) and through budding and grafting. As with other nematode-vectored virus diseases, symptoms appear in localized areas of an orchard and tend to spread outward in a circular pattern.

Local transmission by nematodes and the presence of CRLV in weeds or other native hosts probably explain the slow spread of the disease and its presence over much of western North America (Hansen et al., 1974). In Colorado, a detailed survey of a sweet cherry orchard in which Cherry rasp leaf virus was present showed a 5% increase in the disease over a 6 year period (Luepschen et al., 1974).

CRLV is readily transmitted by sap inoculation. Seed transmission at levels of 10-20% has been shown to occur in some herbaceous hosts, such as Chenopodium quinoa and Taraxacum officinale. However, seeds taken from infected parts of cherry trees failed to germinate (Hansen et al., 1974).

The virus has been detected in pollen from infected cherry trees, but transmission by pollen has not been confirmed (Jones, 1987).

On peaches and cherries

Leaves of cherries and peaches infected with CLRV become deformed, narrow, folded, puckered or distorted, shortening of the internodes, and a general decline of the tree (Stace-Smith and Hansen, 1976). On the underside of the leaves between the lateral veins and along the midrib develop prominent leaflike growths called enations can be observed. Affected leaves are distorted but remain green.

The virus spreads slowly within infected trees so symptoms are often sporadic and may not appear on all leaves or shoots. Symptoms begin on the lower part of the tree and move upward as the virus spreads. Because fewer leaf buds develop on infected wood, limbs become bare near the base of the tree, while leaves higher up develop rasp leaf symptoms.

Hansen (1995) indicated that all cherry cultivars seem to react similarly.

The leaf symptom consists of a rolling of the leaf margins toward the midrib, they become small, long and narrow and appear to be dry (Blodgett et al., 1963) . The leaves also tend to point toward the terminus of the spur or shoot. The resulting appearance is one of water stress or drought. The fruit is flattened along the longitudinal axis, but has a normal seed count. The calyx basin is more prominent and the stem cavity is shallow. Reaction severity varies considerably among cultivars. Symptoms of flat apple occur mainly on cultivars Delicious, Golden Delicious, Jonagold and Gala. Cultivars Fuji, Empire and Granny Smith exhibit relatively mild symptoms (Hansen and Parish, 1990).

Infection can be confirmed by sap inoculation to herbaceous indicators (ISHS, 1980). Chenopodium quinoa and C. murale are the most reliable indicator species. Commercial ELISA kits to CRLV have been produced by Nano Diagnostics and Creative Diagnostics (both in the USA) to be used for DAS-ELISA. The Nano Diagnostics kit can be used to detect CRLV in cherry and other woody plants as well as herbaceous host plants.

Both conventional RT-PCR and real-time RT-PCR tests are available. For conventional RT-PCR, a test to amplify the vp24 gene of CRLV RNA2 the primer pairs vp24F (5’-GGCCCTGACCCTTTTTCCTTTCATTTG-3’) and vp24R (5’-GGTGTACTCAGCTTTGAGGGCTC-3’) can be used. DNA fragments of ca.580 bp are amplified (Ma et al., 2014).

The main pathway for CRLV is international movement of infected host plants for planting, mainly cherry, peach, and apple trees. The virus has been intercepted several times in imported plant material from North America, e.g. in Scotland (Jones et al., 1985).

CRLV is disseminated only slowly by its nematode vectors. Unless assisted by moving water or soil, the nematode vector can only move short distances (for example, 1 m per year (Smith et al., 1997)). The virus could possibly be carried by the nematode vector in soil accompanying plants, although the nematode is prone to desiccation and does not survive for long periods in dry soil.

Because of its slow spread, the disease is mainly a nuisance in nuclear stock propagation. However, it can reach high levels of infection in older orchards. In older orchards, CRLV can reach high levels of infection, and trees planted on previously infected sites can also become infected for example in cherry-producing districts of Colorado high incidences of the virus were found (23% and 38% of infected trees) (CABI).

CRLV could be troublesome in nuclear stock propagation, probably throughout the EPPO region. Rootstocks and some scion cultivars may not show obvious symptoms. None were seen on raspberries known to be infected.

Prevention of introduction and spread of CRLV is the main method of control. For control of CRLV, using certified and healthy planting material is essential. To prevent spread of the virus, infected plants should be immediately removed.

Broadleaf weed control and soil-fumigation to reduce populations of vector-nematodes are effective in helping to control the disease (Ogawa and English, 1991).

CRLV (flat apple isolate) can be eliminated from apple trees by heat therapy. Virus elimination was confirmed by RT-PCR analysis of first and second year growth of heat-treated plants. Fruit and leaves produced by trees subjected to heat therapy were normal in appearance (James et al., 2001).

The potential of CRLV in the EPPO region depends on the introduction of its nematode vector Xiphinema americanum or on the possibility of its transmission by related nematode species. The A2 listing of X. americanum by EPPO is to a large extent based on the virus risk, rather than on any direct risk from the nematode.

Imported propagating material of host plants should have been subject to a visual growing-season inspection. If such material is imported from countries where the virus is present, it should originate from a pest-free area or from a certification scheme giving appropriate guarantees. EPPO recommends such a certification scheme, for use within the region, but it could readily be extended to other regions. EPPO Standards (PM 4/10, PM 4/27, PM 4/29 and PM 4/30) describe in detail the production of pest-free material of Rubus spp., Malus spp., Prunus avium and Prunus persica. (EPPO, 1999, 2001a, 2001b, 2009a). Measures should also be taken against the nematode vector X. americanum including soil testing (EPPO, 2009b).

EPPO (2009b) Soil test for virus–vector nematodes in the framework of EPPO Standard PM 4 Schemes for the production of healthy plants for planting of fruit crops, grapevine, Populus and Salix (PM 4/35). EPPO Bulletin 39, 284-288.

James D, Howell WE, Mink GI (2001) Molecular evidence of the relationship between a virus associated with flat apple disease and Cherry rasp leaf virus as determined by RT-PCR. Plant Disease 85, 47-52

This datasheet was extensively revised in 2020 by Elena Karimova, Yuri Shneyder and Yuri Prikhodko from All-Russian Plant Quarantine Center. Their valuable contribution is gratefully acknowledged.

This datasheet was first published in the EPPO Bulletin in 1983 and revised in the two editions of 'Quarantine Pests for Europe' in 1992 and 1997. It is now maintained in an electronic format in the EPPO Global Database. The sections on 'Identity', ‘Hosts’, and 'Geographical distribution' are automatically updated from the database. For other sections, the date of last revision is indicated on the right.