Known from a limited but varied list of hosts belonging to five different plant families.

The species is only reported from northern Vietnam and Thailand. According to Khahn et al. (2014) in Vietnam it only occurs at higher elevations (between 1000 and 1500 m a.s.l.). 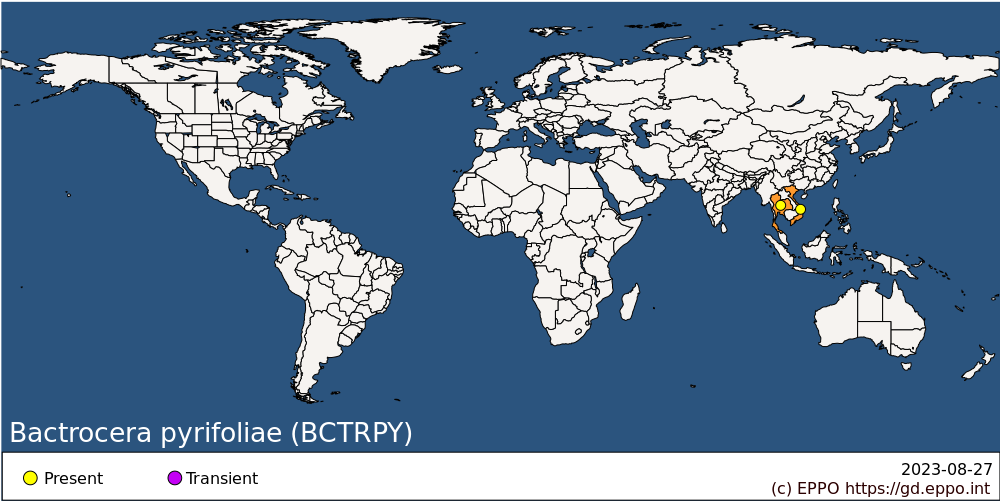 Little is known about the biology of B. pyrifoliae. The general life cycle is considered similar to those of other Bactrocera species infesting fruits: eggs are laid below the skin of the host fruit. Three larval stages develop inside the fruit, feeding on the plant tissue. Once mature, the third instar larva will leave the fruit, dig down into the soil and turn into a pupa enclosed in a puparium. The adult fly will emerge from the puparium. Khanh et al. (2014) provides some biological information on B. pyrifoliae, based upon field observations in Vietnam and laboratory experiments. Infested fruits were recovered from mid-June till mid-July. However, fruits collected from hosts located below 1000m in elevation were not infested. In laboratory rearing, the mean duration of the life cycle from egg deposition to adult sexual maturity was 46 days on average, with an average duration for egg, larval and pupal stage of 2.5, 9.7 and 11.5 days respectively.

Fruit fly larvae in general have a typical shape, i.e., cylindrical maggot-shape, elongate, anterior end narrowed and somewhat recurved ventrally, with anterior mouth hooks, and flattened caudal end. Their length varies from 5 to 15 mm. Identification to species level is not possible based on larvae. A key for the 3rd-instar larvae is available in White & Elson- Harris (1992) and is useful for an identification to the genus level. The larvae of B. pyrifoliae have not been described in detail.

Adult (after diagnostic description given by Drew & Romig, 2013. Additional character states of the female after Drew & Hancock (1994)

The molecular identification of B. pyrifoliae through DNA barcoding is currently not possible as no reference sequences are available on the Barcode of Life Data Systems (BOLD).

Though most Bactrocera spp. can be monitored by traps baited with male lures, B. pyrifoliae is not known to be attracted significantly to any male lure. There may be a weak attraction of males to cue lure according to Drew & Romig (2013), although Nishida and Tan (2016) record a no-lure response. Both sexes can be monitored by traps baited with protein-based attractants. Detection is also possible by examination of fruit for oviposition punctures and then rearing the larvae through to the adult stage.

Transport of infested fruits is the main means of movement and dispersal to previously uninfested areas.   Adult flight can also result in dispersal but previous citations of long (50-100 km) dispersal movements for Bactrocera spp. are unsubstantiated according to a recent review by Hicks et al. (2019). Dispersal up to 2 km is considered more typical.

Peaches are heavily infested in Northern Vietnam from early June till harvest in mid July (reaching levels up to 100%) according to Khanh et al. (2014) and Vijaysegaran (2016).

Management for this species includes the general control measures for Bactrocera spp. (see Vargas et al. 2015 for an overview of management options). These include sanitation (to gather all fallen and infested host fruits and destroy them). Insecticidal protection is possible by using a cover spray or a bait spray. Bait sprays, using a converted brewery yeast waste product, was used against combined infestation of B. pyrifoliae and B. dorsalis in peach orchards in Northern Vietnam and reduced the damage considerably (from 100% to less than 4%) according to Vijaysegaran (2016). Bait sprays work on the principle that both male and female tephritids are strongly attracted to a protein source from which ammonia emanates. Bait sprays have the advantage over cover sprays in that they can be applied as a spot treatment so that the flies are attracted to the insecticide and there is minimal impact on natural enemies and other beneficials.

Bactrocera pyrifoliae is a known pest of peach in the area where it is present. It can be moved in trade with infested fruit. No detailed study was made on climatic suitability of the EPPO region for this species, B. pyrifoliae is known to occur at higher altitudes in its native range, which could indicate preference for cooler conditions, corresponding to temperate climate conditions within parts of the EPPO region. Transient populations could also impact export of host fruit from the EPPO region. The EFSA Panel on Plant Health, in their Pest Categorization of non-EU Tephritidae (EFSA, 2020) placed B. pyrifoliae on the list of fruit flies that satisfy the criteria to be regarded as a potential Union quarantine pest for the EU.

Vijaysegaran S (2016) Bait manufactured from beer yeast waste and its use for fruit fly management. Proceedings of the 9th ISFFEI, 227-248.

This datasheet was prepared in 2020 by Dr M. de Meyer. His valuable contribution is gratefully acknowledged.

This datasheet was first published in 1997 in the second edition of 'Quarantine Pests for Europe', as part of the Bactrocera dorsalis species complex, and revised in 2020. It is now maintained in an electronic format in the EPPO Global Database. The sections on 'Identity', ‘Hosts’, and 'Geographical distribution' are automatically updated from the database. For other sections, the date of last revision is indicated on the right.