Aromia bungii is an oligophagous wood-borer. Its host range is predominantly limited to Prunus spp. Other host plants belonging to different families are reported in the literature, for example, from Ebenaceae (Shandong Academy of Environmental Science, 2009) and Salicaceae (Lei & Zhou, 1998), but sometimes with doubtful supporting evidence (CABI, 2019). See EPPO (2014) for other plant species reported as associated with A. bungii but without supporting information. In Italy A. bungii has been found on Prunus armeniaca, Prunus domestica, Prunus persica, Prunus serotina, Prunus cerasifera and Prunus avium (Regione Lombardia, 2020). Prunus domestica subsp. insititia is a host in Germany (Burmeister, 2012).

A. bungii is native from the southeastern Palaearctic ecozone with an expansion in the Oriental region. In Japan, A. bungii is of recent introduction (first reported in 2012). In the EPPO region, isolated outbreaks were reported in Western Europe: in 2011 and 2016 in Bavaria (Germany), in 2012 and 2016 in Campania (Italy), in 2013 in Lombardy (Italy). In some outbreaks, eradication measures are being implemented, in others containment measures are in place. 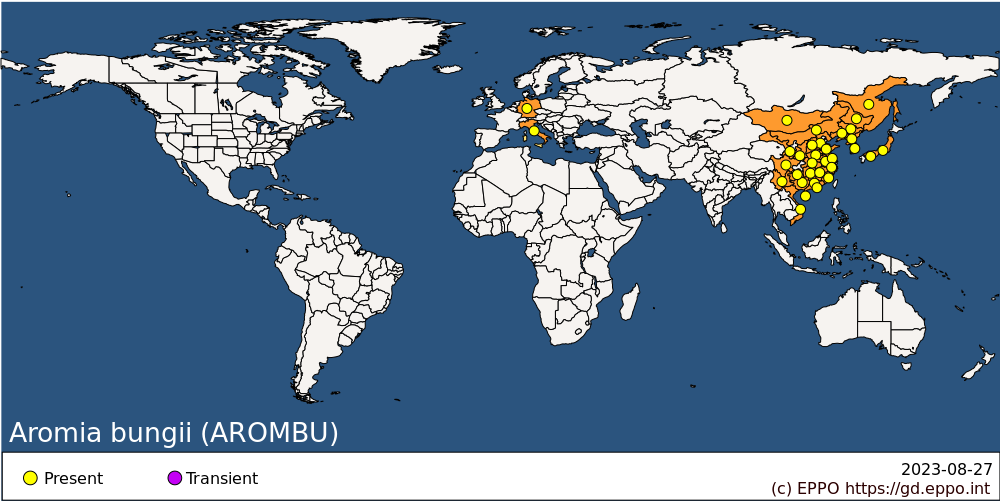 A. bungii is a shiny black beetle, with a characteristic red pronotum, equipped with tubercles. The adults reach 22-38 mm long.

The beetle develops mainly on fruit species of the genus Prunus and can live in urban areas, orchards and forests (Gressitt, 1942; Yang & Chen, 1999; Wen et al., 2010). The life cycle is 2–4 years depending on the latitude and the climate. The flight period occurs from June to August (Ma et al., 2007; Garonna et al., 2013). In Italy, pupation occurs from mid-May and the period of maximum presence of adults is between mid-July and early August (Regione Lombardia, 2020).

Eggs are laid in bark crevices on the trunk, but also on the main branches of healthy or stressed living trees (e.g. eggs have been found up to 2 m off the ground) (Gressitt, 1942; Wu & Li, 2005; De la Peña et al.., 2019). Females can lay eggs on the graft scar of young trees (≥6 cm diameter) (EPPO, 2013). Eggs hatch after approximately 1 week and newly-hatched larvae begin feeding immediately. Larvae bore galleries under bark, in the sapwood and heartwood and eject frass from their gallery at least once a day during their period of activity which starts a few days after hatching (Gressitt, 1942; Liu et al., 1999). The complete gallery can reach 50–60 cm in length (Gressitt, 1942; Duffy, 1968; Wu & Li, 2005; Yu & Gao, 2005; Griffo, 2012). The galleries tend to widen according to the diametric growth of the larvae and take on a typically elliptical section shape. Inside the same tree, larvae of different stages can coexist, due to the overlapping of several generations (Regione Lombardia, 2020). There is no record of infestation in the roots. Pupation occurs in a pupal cell in the heartwood.

Adults emerge from the host through circular or elliptical holes. The lifecycle from egg hatching to adult emergence ranges from 2-4 years depending on the local conditions, quality of the host, latitude and climatic conditions, mean temperature being a good predictor of the duration of the life cycle (De la Peña et al., 2019). Adults feed on bark from young branches (Regione Lombardia, 2020). Adults are diurnal and live 15–20 days. Each female lays 350–730 eggs during its lifetime (De la Peña et al., 2019).

Detection of infested trees is possible during the larval activity period by observation of the frass emitted which may be observed, mainly at the base of the trunk (although some may be seen on the bark). This reddish frass (which is like sawdust) is ejected by young larvae starting from a few days after hatching and its volume increases with the age and size of the larvae.

Adults can also be observed quite easily because of their diurnal activity, their shiny black colour and the characteristic red pronotum.

Eggs of A. bungii are approximately 2 mm in length (Vicinanza et al., 2017) and whitish. They are laid in crevices in the bark.

Newly hatched larvae are 2 – 2.5 mm long. Mature larvae of A. bungii reach 38–50 mm though there is great variability between individuals. The body is whitish with blackish tips and bases of mandibles. The prothorax has an irregular and symmetrical reddish strip on the front. The shape of this strip is specific and useful to identify the pest at the larval stage. The number of larval instars is not known.

The pupa is exarate and whitish and 26–36 mm long.

Adult length is from 28 to 31 mm (Russo et al., 2020). Antennae are much longer than the body in males and as long as the body in females. The typical adult form of A. bungii is easily recognizable with its shiny black elytrae and its bright red pronotum which is the reason for its common name ‘red neck longhorn beetle’.

Visual detection at the beginning of infestation is difficult due to the small amount of frass deposited externally.  However, the frass becomes easier to see as the larvae mature as there is accumulation of frass on the ground at the base of the tree. This sign can be confused with frass ejected by Cossus cossus (Linnaeus 1758), Zeuzera pyrina (Linnaeus, 1761) (Lepidoptera: Cossidae) or Capnodis tenebrionis (Linnaeus 1758) (Coleoptera: Buprestidae) all common pests on Prunus spp. in the EPPO region. To have confirmation that a plant is infested by Aromia bungii and not by another pest, it is essential to identify the larva by morphological and biomolecular analysis or to perform biomolecular analysis of the frass. Exit holes may be visible on the trunk of host plants after the first generation has emerged.

Currently there are no non-invasive identification methods based on PCR amplification of DNA obtained from frass that could be used for A. bungii identification (De la Peña et al., 2019; Everatt, 2019; Russo et al., 2020).

Bottle traps containing fermenting liquids as a lure have been used but efficacy of these baits is poor (De la Peña et al., 2019).  Field trials in Japan and China, using racemic (E)-2-cis-6,7-epoxynonenal lures have shown that the species can be trapped efficiently (Zou et al., 2019).

The main introduction pathway for A. bungii into the EPPO region is probably wood packaging. Other possible pathways are wood or wooden products of Prunus species which are large enough to sustain live larvae until adult emergence. Plants for planting and bonsais may also sustain eggs or young larvae. Living adults may hitch-hike in imported goods but there is no record confirming this.

In the absence of specific information on the flight distance, the natural spread of adults is considered to be similar to Anoplophora spp. (i.e. A. glabripennis or A. chinensis) which is estimated to have a spread range of 2–3 km per season (Smith et al., 2009). However, this distance is influenced by the abundance of and degree of proximity to suitable host plants (Smith et al., 2009). Analyses of infestation foci in Italy (Lombardy and Campania) indicate a spread rate of approximately 2 km in 6 years in Lombardy, while in Campania the species reached 5 km after 6 years (De la Peña et al., 2019).

Information on the economic importance of A. bungii is mainly based on data from China on cultivated apricot, peach and plum trees in orchards. It is considered to be very destructive on peach and apricot, but it can also cause considerable damage to plums and cherry. The production of wood of wild cherry (P. avium) may also be affected.

The damage is only caused by the larvae, which bore into the wood soon after hatching, producing tunnels in the branches and the trunk (Gressitt, 1942). Galleries in the cambium zone stop the circulation of the sap, killing the associated tissues, weakening the tree, and reducing the fruit production. Extensive infestations result in tree death (Duffy, 1968; Wu & Li, 2005; Yu & Gao, 2005; Griffo, 2012).

A. bungii is a xylophagous cerambycid: the larvae feed by digging tunnels inside the wood of the trunk and/or the main branches, both of healthy plants and of guests suffering from various biotic and abiotic stresses (Regione Lombardia (2020).

Control of A. bungii is difficult because the larva penetrates rapidly under the bark and therefore it cannot be controlled with insecticides.

The main control measures are similar to those used against others cerambycids such as Anoplophora spp. consisting of the destruction and the removal of infested trees. Some insecticides currently used against other pests in orchards in integrated pest management programmes are likely to also be effective against adults of A. bungii.

In addition, some generalist parasitoids and predators could probably adapt to the different immature stages of A. bungii, although they are unlikely to control the pest to levels that will prevent economic damage. Biological control has evaluated in China with entomopathogenic fungi and nematodes (Shi et al., 2009) and using a combination of biocontrol agents (Gong et al., 2013).

A. bungii is native from the southeastern Palaearctic ecozone with an expansion in the Oriental region. In the EPPO region only limited outbreaks have occurred. No significant damage to professional orchards has been reported, but most of the infested trees are located in private gardens or small orchards. Aromia bungii does not seem to be attracted to ornamental species of the genus Prunus since the host species are species used for fruit production.

Based on its current distribution and those of its main host plants, it is predicted that the limits of the potential distribution for the EPPO region are the southern part of Scandinavia and the eastern part of the Russian Federation, therefore the zone at risk covers a huge area. The risk of establishment, spread and damage is greater in southern countries because the life cycle is shorter and the main host trees (plum, peach, apricot) are abundant.

Suggested phytosanitary measures are specified in the EPPO PRA (EPPO, 2014) and are as follows:

Visual inspection at the place of production and visual inspection of the consignment should be used as part of a system approach. Plants for planting of Prunus should originate from areas free from the pest or be grown under insect-proof conditions.

Prunus wood commodities should originate from areas free from the pest or undergo heat treatment, irradiation, or chipping (to pieces less than 2.5 cm in all dimensions or 1.5 cm in 2 dimensions). Alternatively, they may be imported for processing at specific times of the year.

Wood packaging material should be treated according to ISPM 15.

As a general approach, it has also been recommended that when importing plants for planting (except seeds) and wood commodities of Populus from countries where A. bungii occurs, precautions should have been taken to avoid any infestations while the consignments are transported through possibly infested areas (EPPO, 2017).

This datasheet was extensively revised in 2020 by Mariangela Ciampitti (Regione Lombardia). Her valuable contribution is gratefully acknowledged.

This datasheet was first published in the EPPO Bulletin in 2015 and revised in 2020, it is now maintained in an electronic format in the EPPO Global Database. The sections on 'Identity', ‘Hosts’, and 'Geographical distribution' are automatically updated from the database. For other sections, the date of last revision is indicated on the right.