The major hosts of A. cinerea belong to the family Salicaceae (in particular Populus and Salix) and to Morus, Ficus, Prunus and Pyrus species.

A. cinerea is indigenous to the west Himalayan ranges and adjoining areas of India and Pakistan. 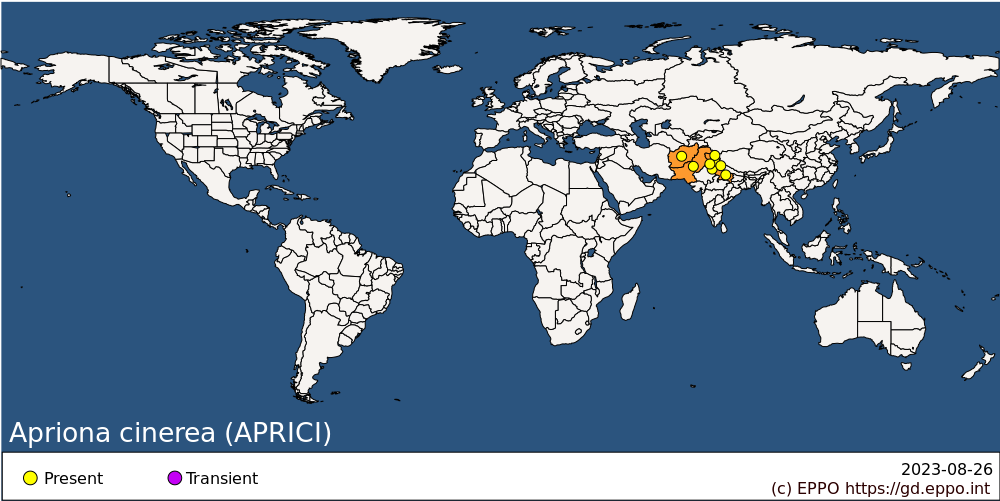 In India, adults emerge between June and September and feed on the bark of green living shoots (Singh & Prasad, 1985). Eggs are laid either on branches or on the main stem. Eggs are laid under the bark, in oviposition slits chewed out by the female. Eggs hatch after 5–7 days.

In the foothills of the Himalayas and the adjoining plains the larva continues feeding until October, but in hills in the Western Himalayas it feeds until November. It remains quiescent throughout winter. It resumes activity in March and continues feeding until winter sets in. In the winter of the second year, it excavates a pupal chamber with coarse wood fibres around it and diapauses as a mature larva. In the following spring the larva transforms into a pupa and by May-June the pupa becomes an immature beetle. In June-September the beetle chews it way out through an emergence hole in the main bole. In the case of young plants in which the pupation has taken place in the root the beetles come up to the ground level where they chew their emergence holes. The life cycle is completed in 2 years. The adult may live up to 35 days.

Adults feed on the bark of shoots which may be girdled and killed. The oviposition scar is conspicuous on an infested stem. Generally, one crescent shaped scar is present on each branch of bigger trees. In young plants resin bleeds from oviposition holes and larval tunnels in the bark may be seen. Larval activity may be recognized by the presence of galleries under the bark and, later, tunnels in the wood. Compared with other borers, larvae of A. cinerea are easier to detect because of the presence of regular frass expulsion holes down the trunk at regular distances of 10–15 mm through which frass is ejected. Each larva makes about 8 to 10 circular expulsion holes. Usually, these holes are on the same side of the trunk (or main stem) and the larva is located near the lower most expulsion hole, as it feeds downwards from top to bottom.

The accumulation of a large amount of ejected frass at the base of the infested trees is a clearly visible sign of the presence of Apriona infestation.

Elongate oval in shape, 7–8 mm long and 3–3.2 mm wide, creamy white, rounded at both ends, front end being broader than the rear end, with hexagonal sculpturing on the surface of the egg visible under the microscope.

The larva is a creamy white legless grub, elongate and cylindrical in shape 60–70 mm long with maximum breadth at prothorax. i.e. 12 mm, cuticle is rather leathery especially on prothorax. Head of the larva is elongate, anterior margin of the head is chestnut brown, rather strongly depressed, widest at anterior third and converging posteriorly. There are three pairs of minute legs. Abdomen with dorsal ampullae non-tuberculate, but armed with small chestnut brown asperites (Gardner, 1927; Duffy, 1968; Singh & Prasad, 1985).

The beetle is elongate, 26–50 mm in length, rather narrow, greyish to greyish yellow, due to a dense pubescence; the under surface of the insect is black. There is a median longitudinal impressed line on vertex of head, the front is cleft between the eyes; antenna is slightly longer than the body.

Visual inspections can be carried out in the field to detect signs of the presence of A. cinerea (see above). For the moment, no efficient trapping systems are available for Apriona spp. (EPPO, 2013).

There is not much data on the capacity for natural spread of A. cinerea. In India it was considered that new plantations more than 1 km from an infestation site are unlikely to be infested during the first 2 years (Singh & Prasad, 1985).

A. cinerea is not a dry wood borer. However, it survives in logs while wood retains moisture. Diapausing mature larvae may be transported while in their pupal chambers along with felled logs in winter. If these logs are kept under moist conditions and not sawn, then beetles from these logs may emerge in summer and colonize new areas.

This insect can be transported with plants (including transport as eggs on cuttings) and wood products (including wood, wood packaging, wood chips, firewood) containing bark, moving in international trade.

The main damage associated with Apriona spp. is caused by the larvae, which bore into the wood soon after hatching, creating long tunnels. Several larvae may be found in a tree. This affects the growth of the trees and decreases the quantity and quality of the timber and longevity of the trees (Shui et al., 2009; Li, 1996). Trees may die and stems/trunks may break. The timber becomes unsuitable for commercial use (e.g. plywood) and entry of fungi and pathogens into the galleries cause discoloration of the wood. The affected trees are much less resistant to wind and may be damaged or fall in moderate winds. Both young and adult trees may become infested. A. cinerea can cause major damage in apple, mulberry and poplar plantations. The adults feed on the bark and cut the leaves and girdle young shoots thus killing them. (Singh & Prasad, 1985). Up to 60% tree mortality has been recorded in young plantations of P. deltoides in Jammu, India (Singh et al., 2004). During random surveys in August-September 2020, less than 0.5% incidence was recorded on P. deltoides clones G-48, WSL109 & WSL 110 under agroforestry in Haryana, Punjab and Uttar Pradesh states of India (A.P. Singh pers. comm., November 2021). This low incidence shows that when good management practices are applied (e.g. use of relatively tolerant clones, isolation from other potentially infested host plants, destroying borer infested trees and timber in the field by burning) the pest can be controlled in poplar plantations.

Control measures include chemical control (including sprays or microcapsules targeting the adults or eggs and young larvae, and fumigation or injections targeting older larvae in trunks and branches), physical control (removal of host trees such as mulberry or paper mulberry on which maturation feeding could occur, or manually catching and killing adults), and biological control (injection of Beauveria bassiana into larval holes, use of parasitic nematodes such as Steinernema spp.). Cultural practices such as sanitation felling (i.e. destruction of damaged and infested plants, or pruning), or use of trap trees, as well as methods to maintain tree vigour help reduce damage.

A. cinerea is a serious pest of apple, mulberry and poplar plantations, hence care should be taken not to grow mulberry or poplar in the vicinity of apple orchards. New plantations should also not be established near infested stands. Potential hosts of the borer must be removed from areas up to 1 km from poplar plantations. In India, the Populus deltoides clone G-48 is relatively tolerant to this pest (Singh et al., 2004).

In areas where A. cinerea could establish, the pest would be expected to attack poplars, apples, willows, mulberries and other host plants in the natural environment, commercial orchards, gardens, plantations and urban areas. It is expected that the potential damage would be high in the southern part of the EPPO region where the pest is more likely to establish outdoors, especially if it established in the wild on hosts that occurred extensively with or without management (e.g. poplar). The environmental impact could be major if the pest reaches forests and other environments where poplar or willow are present. However, there is uncertainty as to the extent to which species belonging to host genera that are present in the EPPO region, but not in the area of origin, might be attacked (EPPO, 2013).

Experience with other cerambycid beetles in the EPPO region showed that their eradication once introduced is very difficult. Therefore, priority should be given to prevent their entry.

Suggested phytosanitary measures for commodities of host plants include origin from a pest-free area, or a pest-free site under physical protection or treatment (heat or irradiation for wood and chipped to a size smaller than 3 cm for wood chips). Further guidance can be found in the EPPO Standards on commodity-specific phytosanitary measures for Populus and Salix (EPPO, 2017a,b). Wood packaging material should be treated according to ISPM 15.

This datasheet was first published in the EPPO Bulletin in 2014 and is now maintained in an electronic format in the EPPO Global Database. The sections on 'Identity', ‘Hosts’, and 'Geographical distribution' are automatically updated from the database. For other sections, the date of last revision is indicated on the right.