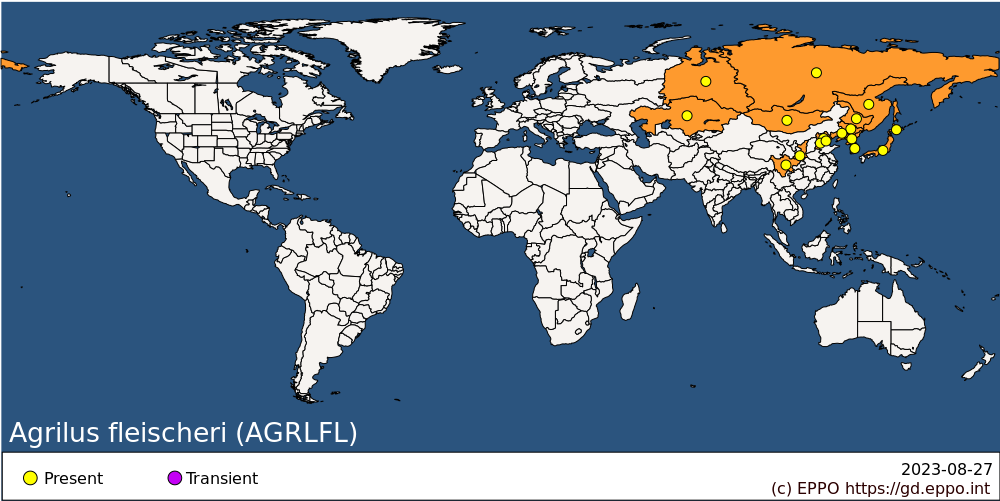 In China, A. fleischeri typically has one generation per year on P. nigra var. italica, although most individuals require 2 years on P. tremula var. davidiana to complete their life cycle.

In Liaoning province, adult emergence begins in late May, peaks in early June, and ends in early June to mid-August. The average longevity of adults is 34 days. The emerged adult leaves a distinct D-shaped exit hole on the trunk, which is on average 3 mm in length and 2 mm in width. During the early stages of adult emergence, the number of emerged males is higher than the number of emerged females, while the reverse is true afterwards.

Adults consume poplar leaves for about 7 days before mating and females feed on the margins of poplar leaves for another week prior to oviposition. In experimental conditions females produced an average of 218 eggs throughout their lifespan.

Eggs are laid either together or individually within bark cracks and crevices or beneath bark flakes. Eggs are first observed in early June, peaking in July and then declining in mid-August. Eggs usually hatch after approximately 12 days.

Newly hatched larvae bore directly into the bark until reaching the cambium where they feed, producing serpentine galleries under the bark. The early-instar larvae feed on the cambium and xylem from mid-June through to late September. The late-instar larvae excavate pupal chambers in the outer sapwood beginning in mid-August, then overwinter as J-shaped mature larvae and pupate in early May the next year. Transformation from pupa to adult takes about 26 days in experimental conditions at 23°C and 69% relative humidity (Zang et al., 2017b).

No identification key or molecular methods (no sequences are recorded in GenBank) for identifying this pest are currently available. Distinguishing A. fleischeri from the European species A. ater is difficult.

Signs and symptoms on trees infested with A. fleischeri include D-shaped exit holes created by emerged adults, serpentine larval galleries filled with fine frass under the bark, yellow foliage, dying branches, dieback and mortality of trees. The bark of P. tremula var. davidiana is smooth but becomes dark brown and cracks vertically after infestation, while the bark of P. nigra var. italica is relatively rough and there is no obvious cracking of the bark in response to larval feeding. It is difficult to detect the pest when it is present at low populations or during the early stages of infestation. Signs of adult feeding on the margins of the leaves may be noticeable in mass infestation.

Newly deposited eggs are milky white, then turn to faint yellow, and change to brown before hatching. Eggs are irregular oval in shape and approximately 1.1 mm long by 0.7 mm wide (Zang et al., 2017b).

Mature A. fleischeri larvae are 18–40 mm long and milky white to light yellow in colour, but the mouthparts and urogomphi are dark brown. The tenth abdominal segments are pale cream and trapezoid in shape. The pronotal groove bifurcates posteriorly and the prosternal groove is entire (Zang et al., 2017b).

Pupae are exarate and milky white at the early stage. Eyes first turn to black, and then the elytra also become black before developing to adults. Pupae are on average 11 mm long and 3 mm wide (Zang et al., 2017b).

Adults of A. fleischeri are 7.3–12.3 mm long and 1.8–3.4 mm wide, dark brown to black, glabrous, with six elytral spots. The face is green for the male and brown for the female. The antennae are serrate with 11 segments, and the kidney-shaped compound eyes are black. Females tend to be larger than males (Jendek & Grebennikov, 2011; Zang et al., 2017b).

Potential pathways for movement of A. fleischeri into Europe are the importation of ‘host plants for planting’, ‘round wood (with or without bark) and sawn wood of hosts’, ‘deciduous wood chips, hogwood, processing wood residues (except sawdust and shavings)’ as well as ‘wood packaging material (including dunnage)’, ‘bark’ and ‘cut branches’. In particular, untreated wood-packing material constructed from recently cut trees can frequently harbour wood-boring insects (Haack, 2006). Some Agrilus larvae may require 2 years to complete development, such as in cut firewood (Petrice & Haack, 2007).

There is no information about dispersal of A. fleischeri adults through actual flight or in wind-tunnel experiments. However, when tethered to a flight mill, A. planipennis, a congener to A. fleischeri and similar in size, flies on average 1.3 km/day and can exceed 7 km per day (Taylor et al., 2010).

A. fleischeri has been responsible for significant damage (tree mortality and decreased of wood quality) to economically important poplar trees in Liaoning, northeast China, and especially to P. nigra var. italica, which is widely found in the EPPO region (Zang et al., 2017b). However, the damage reported in Liaoning concerns only a small part of where P. nigra var. italica is grown in Northern China. Limited or no data was found on the susceptibility and/or impact for other hosts, or in other areas where it occurs (i.e. other Chinese provinces, as well as Japan, Kazakhstan, Mongolia, Russia, South Korea and North Korea).

Biological control can be an effective approach to managing pest populations, especially for the concealed woodboring pests (Yang, 2004). Four parasitoids (Euderus fleischeri, Oobius saimaensis, Polystenus rugosus and Spathius sp.) associated with A. fleischeri have been discovered on infested P. tremula var. davidiana trees, and three species (O. fleischeri, Polystenus rugosus, and Paramblynotus sp.) on infested P. nigra var. italica trees (Yao et al., 2018). The dominant parasitoids are O. saimaensis and E. fleischeri on P. tremula var. davidiana, while O. fleischeri and Paramblynotus sp. were dominant parasitoids on P. nigra var. italica. These natural enemies play an important role in suppressing populations of A. fleischeri in natural forests of China. In addition, the high parasitism rates of these parasitoids in China suggest that they could potentially help manage this buprestid beetle if it does invade new areas (Zang et al., 2017b).

Poplar and willow are widely introduced and cultivated in many EPPO countries and regions because they grow quickly on a range of sites. Poplars are often planted with a low diversity of selected genotypes and poplar production can be concentrated along main rivers such as the Po in Italy or the Garonne in France. High densities of Populus spp. in broadleaved forests are found in the eastern part of the EPPO region (Russia in particular). Locally, high densities are also observed (e.g. in Norway, Finland, Belgium and the South of France).

The preference of A. fleischeri for exotic poplar trees that have been planted in the Liaoning province could indicate that European poplar species may be more susceptible, in particular P. nigra, just as A. planipennis in China threatens the exotic Fraxinus americana, F. pennsylvanica, F. excelsior and F. velutina, whereas the native F. mandshurica and F. chinensis are less affected (Liu et al., 2003, Zhao et al., 2007). The pest could establish in the EPPO region where poplar and willow are grown (with an uncertainty on the species attacked). The climatic conditions allowing the establishment of A. fleischeri are considered suitable at least where similar conditions from areas where the pest currently occurs (i.e. in the eastern part and central Europe), with more uncertainties for other EPPO regions. Existing predators of the native pests may contribute to the control of A. fleischeri.

Suggested phytosanitary measures are specified in the pest risk analysis performed by EPPO in 2018 (EPPO, 2019) and are as follows. Plants for planting of Populus spp. and Salix spp. should originate from pest-free areas or pest-free sites of production under complete physical isolation, plants being packed in conditions preventing infestation during transport (or commercialized outside the period where adults are present). Round wood and sawn wood of more than 6 mm thickness of Populus spp. and Salix spp. should either originate in pest-free areas or undergo debarking followed by heat treatment, irradiation or fumigation. Alternatively, the bark may be removed with 2.5 cm of outer xylem. Bark and cut branches of Castanea spp. and Quercus spp. should originate in pest-free areas. Wood chips, hogwood and processing wood residues should originate in pest-free areas and be stored and transported under control of the NPPO to prevent contamination by adults. Wood packaging material should undergo treatment according to ISPM 15.

FAO (2008) Poplars, Willows and People’s Wellbeing. Synthesis of Country Progress Reports. Activities Related to Poplar and Willow Cultivation and Utilization, 2004 through 2007. Food and Agriculture Organization of the United Nations. Retrieved from http://www.fao.org/3/k3380e/k3380e00.htm [accessed on 01 Nov 2019]

This datasheet was first published in the EPPO Bulletin in 2020 and is now maintained in an electronic format in the EPPO Global Database. The sections on 'Identity', ‘Hosts’, and 'Geographical distribution' are automatically updated from the database. For other sections, the date of last revision is indicated on the right.