Agrilus anxius is a specialist wood-borer of Betula species. In North America, primary hosts are B. papyrifera, B. populifolia. B. lenta, B. lutea, B. occidentalis, and B. alleghaniensis (Balch & Prebble, 1940; Ball & Simmons, 1980; Nielsen et al., 2011). European and Asian birch species rigorously examined thus far in North America are highly susceptible to A. anxius colonization, including B. pendula, B. pubescens, B. maximowicziana, and B. szechuanica (Ball & Simmons, 1980; Miller et al., 1991; Nielsen et al., 2011).

Agrilus anxius is endemic throughout the boreal and Northern temperate regions of North America. Its current range expands into the Southern and Western United States as a result of widespread planting of birch species as amenity trees beyond their native range (Bright, 1987; Johnson et al., 2001). 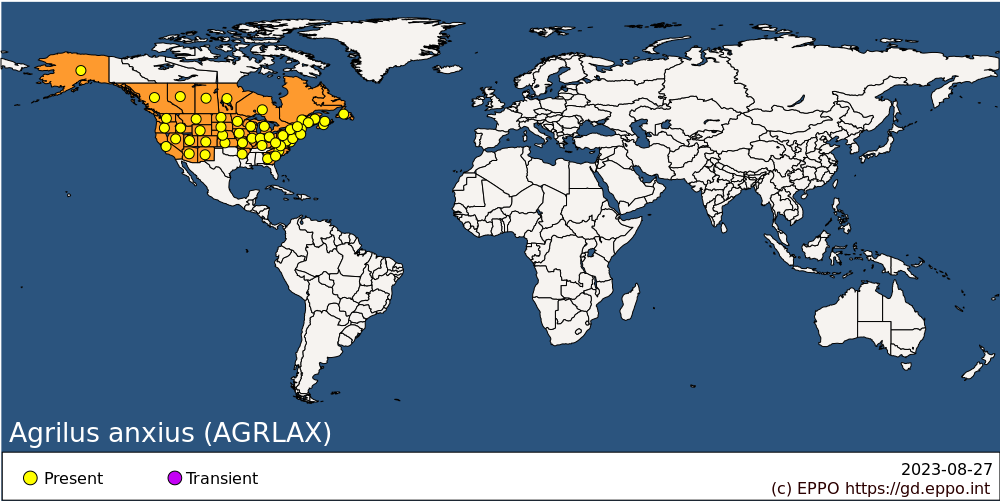 Adult feeding is obligate for survival and reproductive maturation (Barter, 1957; Akers & Nielsen, 1990). Adults can feed successfully on leaves of several species (e.g. Salix, Betula, Populus), but foliar damage is negligible (Akers & Nielsen, 1990). Females lay eggs singly or in clusters, consisting of up to 14 eggs, in bark crevices, cracks, and under loose layers of outer bark (Barter, 1957; Loerch & Cameron, 1984). Females have the potential to produce about 75 eggs in a lifetime (Barter, 1957). Egg eclosion occurs after approximately 2 weeks (Barter, 1957). Neonates bore through the outer bark into phloem tissue and complete 4 instars (Fig. 2A) (Loerch & Cameron, 1983a). Larval feeding results in formation of frass-filled galleries in the phloem and phloem-xylem interface. Galleries vary in length based on host condition and species (Fig. 2B). Larvae produce shorter galleries (approximately 25 cm) in unfavourable hosts (resistant trees) compared to their long, sinuous galleries (approximately 127 cm) in favourable hosts (more susceptible trees) (Anderson, 1944; Barter, 1957). Galleries disrupt phloem transport, which at high densities can girdle and kill trees (Barter, 1957). All instars can overwinter (Barter, 1957). However, pre-pupal larvae (4th instars that have completed feeding and constructed pupal cells) must overwinter or experience freezing temperatures for pupation to occur (Barter, 1957). Upon completion of larval development, 4th instars construct pupal cells interior to the cambial layer, generally during late summer or early autumn (Barter, 1957; Loerch & Cameron, 1984). If similar to A. planipennis, a congener to A. anxius (Petrice & Haack, 2007), 4th instars of A. anxius could persist in this non-feeding stage for extended periods of time. Pupation occurs in April–May (Loerch & Cameron, 1984). Adults emerge from the stems between May and July leaving D-shaped holes that are 3–5 mm wide (Fig. 1) (Akers & Nielsen, 1984).

Agrilus anxius colonizes most Betula species and cultivars, although host resistance varies. An intensive study suggests that A. nigra is immune to colonization (Nielsen et al., 2011). Bronze birch borer is considered a secondary invader of stressed trees (Houston, 1987), and colonization of other North American species (e.g. B. papyrifera, B. populifolia, B. lutea, B. allegheniensis) has been associated with drought, old age, insect defoliation, soil compaction, and stem or root injury (Balch & Prebble, 1944; Anderson, 1944; Barter, 1957; Jones et al., 1993). European and Asian species that have been studied are much more susceptible than North American species (Miller et al., 1991; Nielsen et al., 2011). In a 20-year common garden study in Ohio, USA, with a high number of replicates, bronze birch borer infestation caused complete mortality of Eurasian species (B. pendula, B. pubescens, B. maximowicziana, B. szechuanica), but the majority of individuals (>75%) of North American species (B. papyrifera, B. populifolia, B. nigra) were still alive at the end of the study (Nielsen et al., 2011). Drought stress is not necessary for colonization of B. pendula by A. anxius, as both irrigated and non-irrigated B. pendula trees were highly susceptible to A. anxius colonization in a controlled experiment (BK Hale and DA Herms, unpublished). Birch trees as small as 2.5 cm are colonized by A. anxius (DA Herms and DG Nielsen, pers. obs.).

In North America, A. anxius populations generally exist at endemic levels (Balch & Prebble, 1940). However, periodic outbreaks have been reported during the 20th century and have been associated with predisposing stress (Balch & Prebble, 1940; Nash et al., 1951; Houston, 1987; Jones et al., 1993). For example, following a severe drought, mortality of over 105 million birch trees was associated with an outbreak of A. anxius in the Great Lakes  region of North America (Jones et al., 1993; Minnesota DNR, 1993, 1994).

Trees infested with A. anxius contain at least one of the following: D-shaped holes created by emerging adults, larval galleries filled with frass at the phloem–xylem interface, or serpentine swellings or ridges visible through the bark where wound periderm (callus) has grown over galleries (Anderson, 1944; Barter, 1957). Trees infested with A. anxius may exhibit branch dieback, proceeding distally to proximally in the crown (Ball & Simmons, 1980). Branch dieback is sometimes preceded by yellow or thinning foliage.

Larvae are white to creamy in colour and dorso-ventrally flat. The head is small and protracted into the wide prothorax. There are eight abdominal segments followed by two caudal segments (Barter, 1957). The final caudal segment terminates in two sclerotized tooth-like styles (urogomphi), which are characteristic of Agrilus (Slingerland, 1906). Mature larvae are 8–20 mm long and have four instars (Loerch & Cameron, 1983a).

Pupation takes place in shallow cells excavated in the xylem interior to the cambium. Pupae are creamy-white upon molting and become increasingly darker as pupation progresses, ultimately achieving a bronze to black colour (Barter, 1957).

Adults are narrow, subcylindrical with coppery-bronze metallic colouration. They are 7–12 mm long and females are slightly larger than males (Barter, 1957). Males have ventral grooves on the first and second abdominal segments (Barter, 1957). Adult male A. anxius can be differentiated from the morphologically similar A. liragus (bronze poplar borer) by genitalia morphology. The lateral lobes of A. anxius male genitalia are less narrow apically and more bluntly pointed (Barter & Brown, 1949). Additionally, A. anxius has 22 chromosomes whereas A. liragus has 20 (Smith, 1949).

There is no information about A. anxius adult dispersion by flight or wind. However, when tethered to a flight mill, A. planipennis, a similarly sized congener to A. anxius, flies on average 1.3 km per day and can exceed 7 km per day (Taylor et al., 2010). Agrilus spp. can also be transported by movement of infested plants or wood products, including dunnage, crates, pallets, wood chips, lumber and firewood (Haack, 2006). In particular, non-sanitized wood-packing material constructed from recently cut trees can frequently harbour wood-boring insects (Haack, 2006). The non- feeding pre-pupal and pupal stages of Agrilus can survive for up to 2 years in cut firewood (Petrice & Haack, 2007). A potential pathway for movement of A. anxius into Europe is the importation of woodchips from North America for biofuel. Large volumes of deciduous wood chips, which include material from Betula spp., are imported and stored outdoors in close proximity to susceptible birch species (Kopinga et al., 2010).

In North America, A. anxius is the most serious pest of birch trees in both forest and amenity plantings (Barter, 1957; Ball & Simmons, 1980). In urban landscapes, A. anxius has caused widespread mortality of ornamental and street trees. In the Northern hardwood and boreal forests of North America, periodic outbreaks of A. anxius have also led to widespread mortality of birch, causing negative impacts on community composition and wildlife (Balch & Prebble, 1944; Nash et al., 1951; Millers et al., 1989; Jones et al., 1993).

Betula spp. exist throughout most of Europe but are most dominant in temperate and boreal forests of Northern Europe (Hulte´n & Fries, 1986). In Northern Europe, birch are the most important commercial broadleaved species (Hynynen et al., 2010), and depending on species, are used for pulpwood, fuel wood, lumber, plywood, and as amenity trees.

Control and detection of this type of wood-boring insect is difficult. There are several insecticides (e.g. azadiractin, bifenthrin, dicrotophos, dimethoate, dinotefuran, emamectin benzoate, imidacloprid, permethrin) that have been shown to control Agrilus spp. to varying degrees (Appleby et al., 1973; Petrice & Haack, 2006; Herms et al., 2009; McKenzie et al., 2010; Smitley et al., 2010). They may be used in nurseries or on ornamental birch trees. Depending on the label, they can be applied as soil drenches, soil injections, trunk injections, lower trunk sprays, or cover sprays on the trunk, branches and foliage (Herms et al., 2009).

The wide geographical distribution of A. anxius in North America, from Northern Canada to the Southern United States, indicates that A. anxius can tolerate a wide range of climatic conditions, and could be physiologically pre-adapted to establish throughout much of the EPPO region. Birch species exist throughout most of Europe and Asia. Some species, such as A. pendula and B. pubescens, dominate stands in Northern Europe. For example, in Nordic and Baltic countries, birch species comprise from 11–16% and 17–28%, respectively, of the total volume of growing stock (Hynynen et al., 2010). Considering the high susceptibility of European Betula spp. to A. anxius (Nielsen et al., 2011), the introduction and establishment of this beetle may be expected to result in outbreaks and widespread mortality of Betula in forests, nurseries, and cities throughout Eurasia. If it were to be introduced and establish, A. anxius could threaten to extirpate European Betula spp. on a continental scale, just as the establishment and spread of A. planipennis in North America threatens the survival of Fraxinus spp in North America (Poland & McCullough, 2006).

A. anxius was added in 2011 to the EPPO A1 List of pests recommended for regulation, and EPPO member countries are thus recommended to regulate it as a quarantine pest. Suggested phytosanitary measures are specified in the PRA performed by EPPO in 2010; they are as follows.

Plants for planting of Betula should originate from countries found free from the pest or be a small diameter (<2 cm). Alternatively they may be grown under insect-proof conditions.

Betula wood commodities should originate from countries found free from the pest or undergo heat treatment, chemical treatment, irradiation, chipping, or grinding. Alternatively they may be stored in the country of export for an appropriate period (1 year for wood chips, 2 years for wood).

Anderson RF (1944) The relation between host condition and attacks by the bronzed birch borer. Journal of Economic Entomology 37, 588–596.

Balch RE & Prebble JS (1940) The bronze birch borer and its relation to the dying of birch in new brunswick forests. Forestry Chronicle 16, 179–201.

Hutchings CB (1923) Some biologic observations on the bronze birch borer Agrilus anxius, Gory. In: 15th Annual Report of the Quebec Society for the Protection of Plants from Insects and Fungous Diseases, pp. 89–92. The Entomological Society of Ontario, Quebec (CA).

Smith SG (1949) Evolutionary changes in the sex chromosomes of Coleoptera. I. Wood borers of the genus Agrilus. Evolution 3, 344–357.

This datasheet was first published in the EPPO Bulletin in 2011 and is now maintained in an electronic format in the EPPO Global Database. The sections on 'Identity', ‘Hosts’, and 'Geographical distribution' are automatically updated from the database. For other sections, the date of last revision is indicated on the right.