The area of origin of T. sartus is thought to be Pakistan and Western India, from which it spread westwards to Afghanistan and Iran and northwards to the Central Asian countries; Tajikistan, Kyrgyzstan, Turkmenistan, Uzbekistan where it was first found in 1911 (in Samarkand, UZ). The pest continues to increase its range in these countries (Orlinski et al., 1991; EPPO, 2005). T. sartus was also found in several poplar trees in South Kazakhstan (Shymkent), however, the researcher believes that the pest will not be able to survive there (Kostin, 1973). There is some information about findings in Japan, Malaysia and Sri Lanka (CAPS Program Resource, 2020) but more data is needed to confirm these findings. T. sartus is found usually in lower mountainous areas up to an altitude of 2000 m. 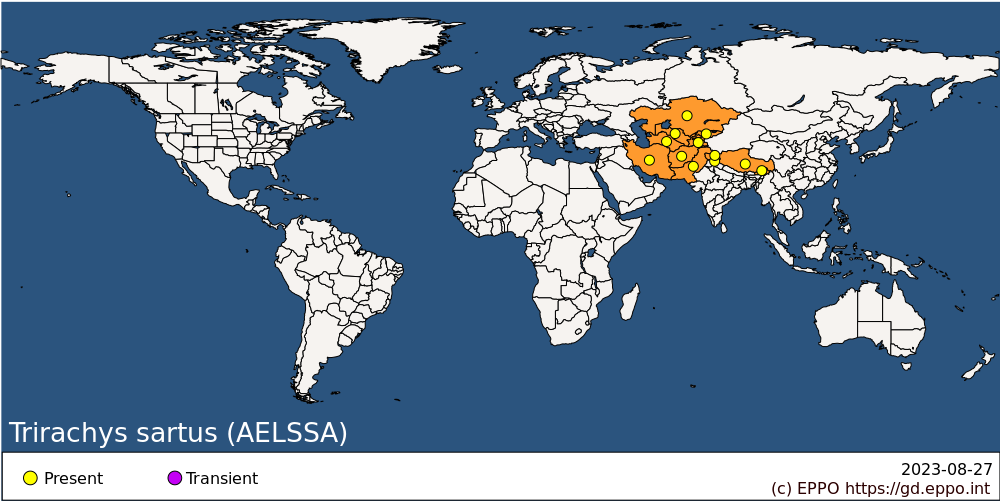 The life cycle of T. sartus takes two years (Kulinich, 1965; Ahmad et al., 1977; Orlinski et al., 1991; EPPO, 2005). Adults usually leave their pupation cells at an average daily temperatures from 15 to 20°C. The mass beetle emergence in Tajikistan (Dushanbe) was observed from the end of April to June at 15,7ºC (Kulinich, 1965), and in Pakistan from March to April (Ahmad et al., 1977). Beetles are generally active in the evening and night. During the daytime, the adults hide under the bark, in larval tunnels and in other refuges. After about 19:00, they leave their hiding places, males appearing first, and move about until morning on the surface of the particular tree on which they have developed. This species does not fly much and maturation feeding has not been observed. Just after exiting the hiding places, the adults begin mating. Males can mate multiple times.

Females lay eggs in slit-like niches in the bark of trunks and large branches shortly after leaving the pupation cells and continue oviposition for about two months. They lay 1–3 eggs at each site. Normally, one female lays 240–270 eggs in her lifetime (EPPO, 2005). The maximum number of eggs found in one female was 342 (Kulinich, 1965). Viable eggs are produced at a minimum temperature of 15°C, however, oviposition does not occur at temperatures below 10°C or above 35°C (Ahmad et al., 1977).  Maximum egg hatch occurs at 22 to 24°C, 12 to 13 days following oviposition.   The development of larvae in the egg lasts 9–17 days. Hatched neonate larvae are light coloured and about 2.5-4.0 mm long and by the end of summer they grow to 50-60 mm. Adult males live 7 to 15 days and females live 19 to 25 days (Ahmad et al., 1977).

Each larva makes its own tunnel (even if several eggs were laid together) in order to feed between the bark and the wood. Frass is ejected through the entry hole. Later, larvae enter the wood and, at the end of the first season of development, make a long (about 25 cm) tunnel which first rises parallel to the long axis of the trunk or branch and then turns to form a downward gallery of 15 cm. At the bottom of this gallery the larva overwinters protected by a double plug made from borings (EPPO, 2005).

The following spring, larvae continue to feed, making tunnels deep into the wood. At the end of July, they prepare pupation cells protected by double plugs made from borings. Pupation occurs in these cells and, after about two weeks, adults appear. The adults stay in the pupation cells over winter and leave them in spring (Kulinich, 1965; Ahmad et al., 1977; EPPO, 2005).

Large elliptical emergence holes 3-3.5 х 1.2-1.5 сm in trunks and large branches, and frass at the basis of infested trees, are indications of the presence of the pest. The adult beetles are conspicuous and may be seen sitting on the trunks. Branch and tree dieback is easily detected by observation of wilting and drying leaves.

First white, then brownish-grey, up to 45 mm long.

The adult of T. sartus has an elongated dark grey-brown body with elytra covered with short silvery hairs.  Shiny silvery spots form two irregular bands crossing the elytra. Body length varies from 22 to 42.2 mm in males and 29.2 to 43 mm in females. The male has antennae 2.5 times as long as the body, whereas the female antennae are shorter than the body. Elytra obliquely truncate at the apex, the outer angle being unarmed and the sutural angle is dentate or shortly spine (Ahmad et al., 1977).

Adults of T. sartus are infrequent fliers and usually remain on the surface of the host tree on which they developed. In this regard, natural spread of the pest by adult flight is relatively slow (Kulinich, 1965; EPPO, 2005). The most likely pathway of T. sartus for introduction is infested wood, especially wood packaging material. Different life stages may readily be transported with untreated wood and large plants for planting moving in trade, because they remain concealed and difficult to detect. T. sartus is unlikely to be carried in small plants for planting (of forest, ornamental or fruit trees) as it does not attack small branches or seedlings. Adults may, however, be carried as contaminating pests on various commodities.

Trirachys sartus is one of the most important pests of many forest, ornamental and deciduous fruit trees in the region of its present distribution (Kulinich, 1965; Ahmad et al., 1977; Yagdyev, 1979, 1987; Sengupta & Sengupta, 1981; Krivosheina & Tokgaev, 1985; Khan et al., 2013). It attacks both stressed and healthy trees of different ages. Successive generations remain on the same tree for several consecutive years, eventually causing its death. Sometimes, young larvae encircle a tree feeding on the cambium, which leads to the rapid death of the tree. Young trees with thin bark are most susceptible to the beetle and 1–3 larvae may be enough to kill a tree (Kulinich, 1965). Gaffar and Bhat (1991) consider this beetle as one of the most destructive pests of walnut trees (Juglans regia) in India. Serious damage is also observed in shelter belts and in fruit (especially apple) orchards (Krivosheina, 1984; EPPO, 2005).

In nature the spread and damage to tees by T. sartus usually depends on the location of the plant growth. T. sartus is more common in the valleys than in the mountains and it causes especially great damage to trees in the valleys. Kulinich (1965) reported that in the Beshkent and Vakhsh valleys (Tajikistan) (350-450 m above sea level) it was difficult to find trees that were not damaged by this pest. In the Gissar valley (800-850 m) there were fewer trees damaged by pest. The higher the mountains, the more difficult it is to find trees infested or damaged by T. sartus. However, single infected trees were also found at an altitude of more than 1800 m.

The most serious damage T. sartus is caused to urban plantations, which usually grow in unfavorable climatic conditions (poor watering, closely located road, etc.) and are less resistant to pests. For example, all large trees in Tashauz city (Turkmenistan) were destroyed because of T. sartus (Orlinski et al., 1991). Affected towns are usually situated in hot and dry climatic conditions, where large deciduous trees are particularly important for the urban environment, and are also difficult to grow. In this case, trees in cities located in the highlands can also be severely damaged by T. sartus (for example, in Kabul, 1800 m above sea level) (Kulinich, 1965).

Major control efforts are undertaken in countries where T. sartus is present. Control measures include management actions (e.g. surveys in nurseries with burning of infested plants for planting, and felling and burning of all infested trees), planting more resistant species and varieties of trees, treatments with chemical and biological insecticides (Krivosheina, 1984; Gaffar & Bhat, 1991; Mohi-Uddin et al., 2009). Many investigations have been performed on biological and microbiological control of the pest (Mamaev & Yagdyev, 1981; Arshad & Haﬁz, 1983; Hanif & Chaudhry, 1992). Kamran et al. (2017) studied application the insect repellent technique against larval instars of T. sartus under field conditions but these methods have had little practical success.

T. sartus is absent from practically all EPPO regions (present only in southern Kyrgyzstan, southern Kazakhstan and Uzbekistan, and in the potential member countries Tajikistan and Turkmenistan). An EPPO PRA concluded that T. sartus is a serious pest in countries where it occurs, and already has a history of spread from the Indian subcontinent to Central Asia (EPPO, 2005; Orlinski, 2006). It has a wide host range. In view of the hot and dry climatic conditions of its countries of origin and present distribution, the endangered area is primarily the Mediterranean and other southern countries (such as Albania, Algeria, Bulgaria, Greece, Italy, Portugal, Romania). Its impact would most probably concern: plantations of Populus; Platanus, Ulmus, Juglans and other amenity trees in cities and parks; fruit trees; various tree species in forests. Infested large plants for planting and wood are the most likely pathways for introduction. Since there is at present little international trade in the wood of host plants of T. sartus, the main phytosanitary risk comes from untreated wood packaging material (especially dunnage). There have been two cases of Trirachys sp. interception in U.S. ports in wood packing material originating from India and China in 2013 (CAPS Program Resource, 2020).

In 2002, Trirachys sartus was added to the EPPO A2 List of pests recommended for regulation as a quarantine pest, and endangered EPPO member countries are thus recommended to regulate it as a quarantine pest. Phytosanitary measures could include requiring consignments originate from a pest-free area. Wood packaging materials should respect requirements of ISPM no. 15 (ISPM, 2018). International movement of wood of the host plants from countries where the pest is currently distributed does not seem very likely, but measures in that case could be debarking, grub-hole freedom, heat treatment, fumigation or other appropriate treatments.

This datasheet was extensively revised in 2020 by Dr. O.A. Kulinich. His valuable contribution is gratefully acknowledged.

This datasheet was first published in the EPPO Bulletin in 2005 and is now maintained in an electronic format in the EPPO Global Database. The sections on 'Identity', ‘Hosts’, and 'Geographical distribution' are automatically updated from the database. For other sections, the date of last revision is indicated on the right.