The International Working Group on Maize Pests (IWGO) of IOBC has recently organized a Workshop on Diabrotica virgifera (EPPO A2 pest) in Graz (AT), on 1995-03-20/21. During this Workshop, the present situation of the pest in Serbia has been presented. In mid-July 1992, unusual symptoms of maize destruction were observed in the vicinity of Surcin airport, near Belgrade, on a small plot (0,5 ha). The pest was identified as Diabrotica virgifera by a US expert. In 1993, maize fields were infested, on the territory of Srem, in the zone of Boljevci-Popinci-Golubinci-Indija to the confluence of the river Sava with the Danube, then south of the Danube at Visnijicka Banja and east of the Danube at Borca. Highest population levels were recorded in the immediate vicinity of Surcin airport. In some fields, losses were extremely severe (up to 80 % plant mortality): these maize fields had been infested in 1992, and maize was cultivated again in 1993. The numbers of adults observed were considerably less in the localities in the direction of Boljevci, Dobanovci, Ugrinovci, Batajnica and Zemun. During this period, the spread of the pest was 40-70 km to the north, 40 km to the east, 40 km to the south. The main direction of the spread is towards the north-west (in general, the main movement of the populations follows the prevailing winds). On the basis of three years of observations it was found that adults quickly covered huge distances. Respectively, 110.000 ha of maize were found infested in 1993, and 200.000 ha in 1994. Up till now, the pest has crossed the rivers Sava in Sumadija, Danube and Tamis in Banat, but has not reached Backa yet. The air distances to the Romanian and Hungarian borders are respectively 50 km and 100 km. It is thought that the pest was introduced in 1990, by air transport, from North America.
The pest life cycle observed in Serbia is similar to that in USA. The pest has one generation per year and overwinters in soil (diapausing eggs). In Serbia, hatching takes place from mid-May to the end of June, and three larval stages are observed before pupation. Beetles have been observed from June 24 to October 15, with a maximum number per plant during maize flowering from July 28 to August 10 in 1993 (July 15 to July 20 in 1994).The peak of oviposition has been recorded in August.
The main damage is caused by larvae which bore and feed on the roots. Attacked plants then usually show stem deformation, bent stems ("goose necking") and may lodge. Adults feed on leaves, pollen and later on silk. However, when populations of adults are high (over 30 imagoes have been found on severely damaged ears), feeding damage on maize leaves and especially on corn silk (leading to reduction of kernel numbers) has been observed. In 1994, damage was in general less serious than in 1993 which was a dry year. In 1994, large amounts of rainfall in the first half of the growing season resulted in a better recovery of attacked plants which were able to produce new roots. It has been noted that wide areas of maize, high plant density, high amount of rainfall, maize irrigation, continuous cropping of maize are factors favourable to the multiplication of D. virgifera.
The main method of control against this pest is crop rotation (in Serbia: maize/wheat). Trials have been set up to evaluate the efficacy of several chemical compounds, in 1994, in the vicinity of Surcin. The first results indicate that the best control of larvae was achieved by applying terbufos, chlormefos and phorate as a soil treatment at sowing.
Distribution of Diabrotica virgifera in Serbia
(map published by Sivcev, I.; Manojlovic, Krnjajic, S.; Dimic, N.; Draganic, M.; Baca, F.; Kaitovic, Z.; Sekulic, R.; Keresi, T. (1994) [Distribution and harmful effect of Diabrotica virgifera Leconte (Coleoptera, Chrysomelidae), a new maize pest in Yugoslavia].
Zastita bilja, 45(1), 207, 19-26.) 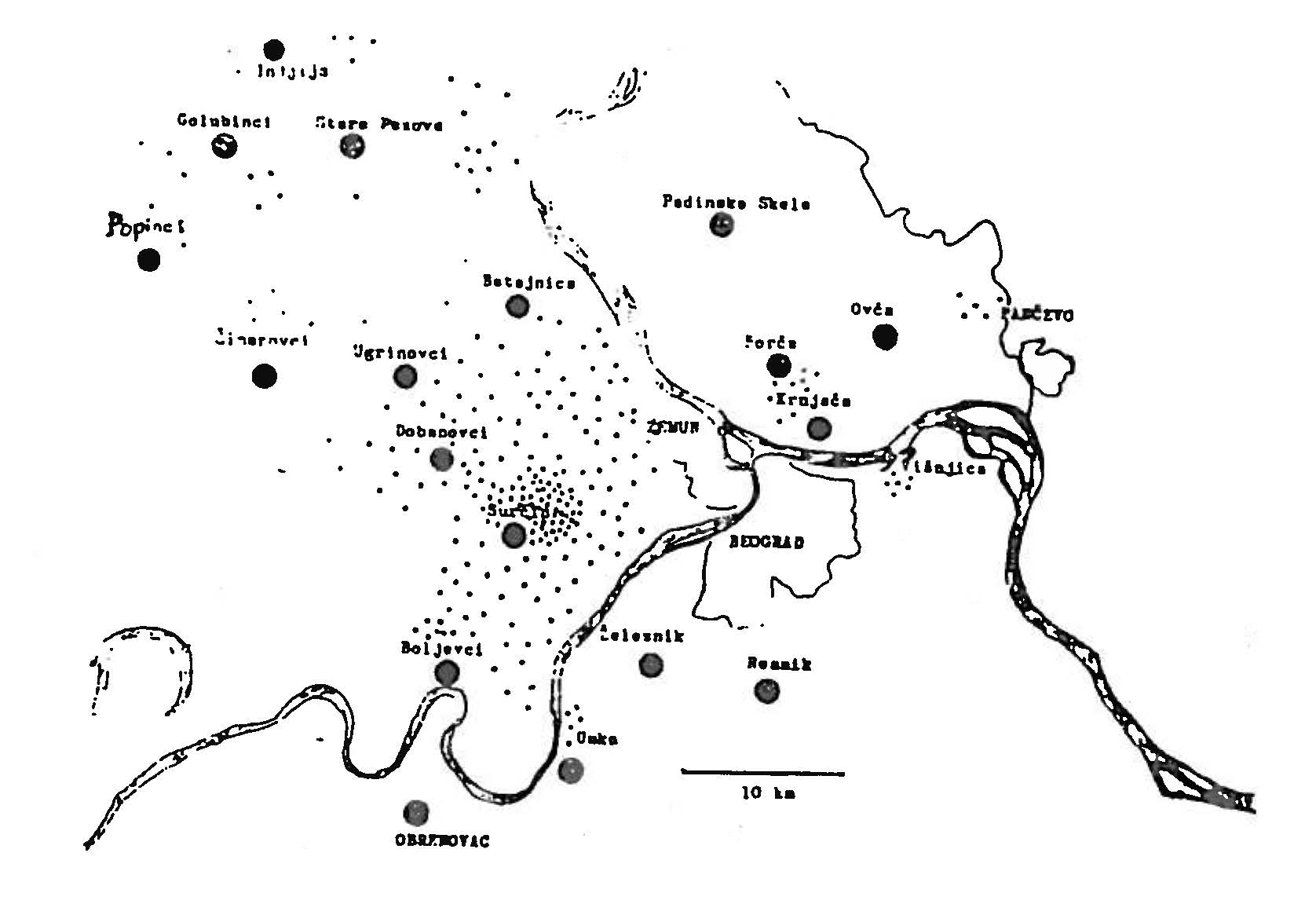