Since 1996, the French NPPO has tried to identify the main pathways of entry for Thrips palmi (EPPO A1 quarantine pest). Visual inspections for T. palmi are difficult due to the small size, mobility and behaviour of the insect. Inspection techniques using the 'Berlese' device have been developed and were found particularly useful to detect thrips on flowers and leafy vegetables. Due to the heat of the lamp, insects leave the plant samples and fall into an alcohol solution. However, 8 hours are necessary and only adult thrips can be reliably identified. 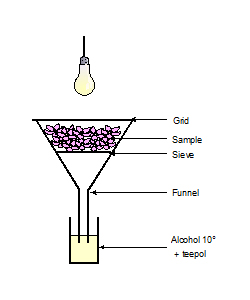 The results of import inspections on T. palmi made in the airports of Paris during the last 3 years are presented below.
(Table from Bayart et al., 1999)
The main pathways identified are orchid cut flowers from Southeast Asia, fruits and vegetables (mainly Solanaceae and Cucurbitaceae) from Thailand, Mauritius and Dominican Republic. Considering the risks presented by such a polyphagous and harmful species, and as numerous interceptions of cut orchid flowers were made not only in France but also in many other European countries, the EU took a decision in February 1998 stating that orchids flowers from Thailand must have been produced at a place of production found free from T. palmi during the last 3 months or fumigated, and consignments must be accompanied by a phytosanitary certificate.